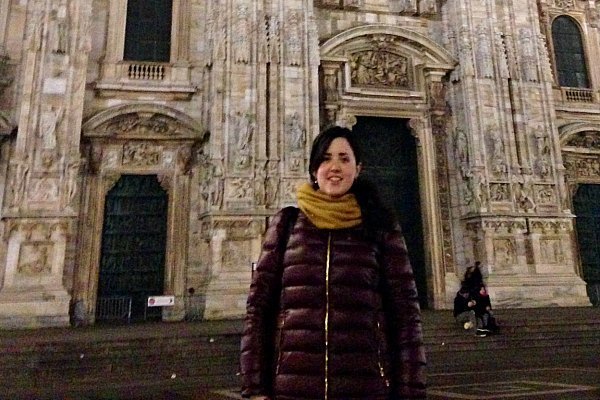 Maria Giulia Genghini, a graduate student in the Ph.D. in Literature program, received a Graduate Break Travel and Research Grant to travel to Milan over winter break to conduct research on her project entitled "Saint Charles Borromeo and the Jesuits: A Friendship That Changed Milan (1564-1630)." While there, she was able to conduct extensive research at and about the Ambrosiana Library. Giulia recently wrote to us about her research:

Strategically placed at the gateway to the Italian peninsula, Milan has been the subject of constant disputes over the centuries. This is visible in its urban setting which is a mixture of styles and influences, from the Roman grandeur to the convoluted Gothic, from the Spanish majesty to the Austrian royalty. The Gothic Cathedral that emerges at the centre of town is surrounded by a concentric planimetry, which does not follow the Roman order created by the “cardi” (perpendicular roads) and the “decumani” (parallel roads). The Roman Columns of Saint Lawrence are only an eight-minute walk from the Medieval Church of the Saint Sepulchre, adjacent to the Ambrosiana Library, one of the first libraries open to the public from the year 1609.

Its founder was Cardinal Federico Borromeo, Saint Charles’ nephew, who conceived of this place as the first early modern centre for study and culture. Cardinal Borromeo collected for his library a vast number of codices in Greek, Latin, Italian and oriental languages. Most of the acquisitions came from religious institutions – such as the Benedictine Monastery of Bobbio, the Augustine Convent of Santa Maria Incoronata and the Library of the Metropolitan Chapter (Capitolo Metropolitano) in Milan – or from important private collections such as those of Gian Vincenzo Pinelli, Francesco Ciceri and Cesare Rovida, all renowned scholars and bibliophiles of the XVI century.

The idea behind the foundation of this library was that of expanding the access to knowledge from specific elite groups – be them clerical or academic – to the general laity. As obvious to modern eyes as this principle can sound, this idea was highly unpopular at the beginning of the 17th century. To be fair, it did not even belong to Federico. It came from his uncle, Charles, who was inspired by the Jesuits he met in Rome in 1566 to “remake the city from top to bottom.” Milan in the aftermath of the Council of Trent (1545-1563) was representative of the lapsed state in which the Roman Catholic Church had fallen. The practice of the selling of indulgences and the lazy conduct shown by most religious were an everyday matter and Charles had his heart determined to provide a solution. He is remembered by history as the leader of a process of reforms that transformed the clergy (ACTA ECCLESIAE MEDIOLANENSIS). Nobody is aware, however, of the origin of his innovative mode of proceeding that made him the champion of the education of the laity.

After his visit to the Jesuit Collegio Romano in 1563, Charles developed an understanding by which he believed that the disorders of the Church had arisen by ignorance. One might react suspiciously at the consideration that the antidote to depravity might be found in education and therefore it is necessary to deepen the meaning that Charles attributed to education, as it came to be formed in his friendship with the Jesuits.

In order to do so, one needs to visit the Ambrosiana since Charles’ documentation, from letters exchanged to prayer books, is held by the library that owns all the rights.

The generosity of the Nanovic Institute and of its donors granted me the opportunity to travel to the Ambrosiana library in Milan over Christmas Break and thus provided the means for research that proposes a new argument for the foundation of the Ambrosiana library and the concept of culture and study it fostered in 17th century Milan. I am currently working on an article that draws upon the testimonies of several letters [F.73 Inf., 88; 94v, 99; 196] between Charles and Benedetto Palmio, one of the first Jesuits to be brought to Milan in 1571. The exchange discusses the terms of the foundation of the Seminary of San Felice and of the University of Brera. In a time of banishment, where books were reviewed before they could be held in possession, Charles and the Jesuits supported each other in the creation of communities where the learning of good preachers could be of aid to the education of the youth according to the Christian ideals of “charitas” and nobility. In contrast with the ideals of the Inquisition, Charles and the Jesuits stood in Milan as an opposing force to the obscurantism of the age, in an attempt to defend the Catholic Church from the extremist tendencies that greatly harmed her spirit.

I am deeply indebted to the Nanovic Institute for the opportunity of researching unedited archival material that will constitute the basis of my second article, to be published in the Ambrosiana journal by December 2016.