Lucy Jones ('18) received The Pessoa Grant for Advanced Language Training in Portuguese, allowing her to travel to Lisbon last summer to improve her language skills and to immerse herself in Portuguese culture. Lucy recently wrote to us about her experience:

Stepping off of the plane and onto the tarmac, I closed my eyes, took a deep breath, and felt the heat of the Lisbon summer sun, warm against my cheeks. With the scent of the ocean lingering in the air, I thought to myself, “This is my home for the next eight weeks.”  Would I enjoy living in Lisbon? Would I make friends? Is my Portuguese good enough? These are some of the questions that echoed endlessly in my mind before deciding to study abroad in Portugal. Before embarking on my journey to Lisbon, I was a little nervous, incredibly excited, and eager to put my Brazilian Portuguese to use in a real-life setting. Something that I never expected, however, was that this summer would be one of the most enriching experiences of my life.

I decided to study abroad in Lisbon because Portugal, as a country and a culture, used to be a mystery to me. Having heard about the strange Portuguese accent and idiomatic expressions in my Brazilian Portuguese classes at Notre Dame, I knew that I wanted to learn more about this language and culture from an insider’s perspective. How does Portuguese differ from Brazilian Portuguese? What kinds of foods do the Portuguese eat? The idea of Portuguese lifestyle was intriguing to me linguistically, gastronomically, and culturally. From my Spanish language education, I knew that an immersive experience was necessary, if not imperative, to fully understand a different culture. Formally studying in Lisbon would allow me to gain an advanced fluency in Portuguese language, and living in the city as well would give me the opportunity to absorb some of the cultural characteristics that make Portugal unique. With the Pessoa Grant, I knew that both my linguistic skills and cultural awareness would improve immensely and that I would leave Portugal with an unforgettable, international experience. 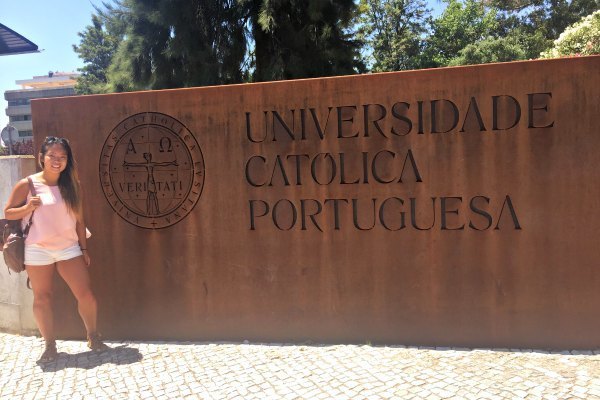 For the month of June, I studied intensive Portuguese language at the Catholic University of Portugal through the Study in Portugal Network (SiPN). In July, I continued with my study of Portuguese at the University of Lisbon. With SiPN, I took classes from 9am to 1pm every day and lived at a student residence building, Doorm, with other international students. Working with SiPN made studying abroad in Lisbon convenient and comfortable, as it arranges for classes, transportation, housing, and field trips throughout Portugal. Classes at both the Catholic University of Portugal and the University of Lisbon were rigorous, but were structured around the specific needs of the international students. For the first two hours of class, we focused on Portuguese grammar and made important distinctions between Brazilian Portuguese and Peninsular Portuguese. During the second half of the day, we honed our conversational skills in Portuguese and practiced correct pronunciation. We spent the portion of class devoted to conversation discussing real-life topics, such as the upcoming election in the United States and the economic effects of Brexit on the European Union. By using current events as reference points in our discussions, our conversations felt comfortable and natural. It was in these conversations that I was able to both put my grammatical skills to use, as well as learn more about important topics in today’s world. We used this time to learn more about Portuguese culture and were introduced to Portuguese music, literature, and cinema.

Outside of the classroom, SiPN provided opportunities to explore the country by arranging trips to the Azores, one of the autonomous regions of Portugal in the middle of the Atlantic Ocean, as well as historic cities such as Sintra and Porto. On these trips, we were fed traditional Portuguese cuisine, such as bacalhau com natas, or salted cod with a cream sauce. We relaxed on famous beaches in Portugal and toured some of the other hidden gems that Portugal has to offer, such as Castelo de São Jorge. Being led by SiPN program directors and scholars, these trips served as both cultural and educational experiences and were definite highlights during my trip. One of my favorite memories from studying abroad in Portugal was getting to meet the US Ambassador to Portugal, Robert Sherman, at the US Embassy in Lisbon. During this visit, we learned about foreign service, diplomacy, and US relations with Portugal. Overall, seeing locations outside of Lisbon enriched my Portuguese experience and provided varying insights into the Portuguese lifestyle. The field trips that SiPN provides are what make the Study in Portugal Network a truly unique program and they helped make my Portuguese education in Lisbon what it was: interesting, thought-provoking, and thorough.

As a student in Lisbon, but more importantly as an active participant in Portuguese culture, I learned about what it means to be Portuguese in today’s world. I was introduced to unique characteristics of Portuguese culture and gained a fluency in Portuguese language that is only attainable through experience. After eight weeks of living and studying in Lisbon, as well as traveling outside of the city, I’ve learned that the Portuguese are welcoming, passionate, and hard working people. They welcomed me into their city, their home, and they treated me like I was one of their own. They are proud to be Portuguese and work hard to keep a positive image in the eyes of the rest of the world. Their country is comparatively small, but their hearts are big and their culture is unlike anything I’ve ever experienced. Returning home to the United States, I am thankful for the Portuguese accent that I’ve proudly picked up, for the people that I met, and for my newfound love of salted cod. After viewing the world through the Portuguese lens for two months, I am returning home as a changed human being. My experience in Lisbon will carry with me for the rest of my life, and as they say in Portugal, “once a Lisboeta, always a Lisboeta.” Studying abroad in Lisbon has been the experience of a lifetime and I would encourage anyone interested in Portuguese language and culture to travel to Lisbon to have the kinds of experiences that I did during my summer abroad. 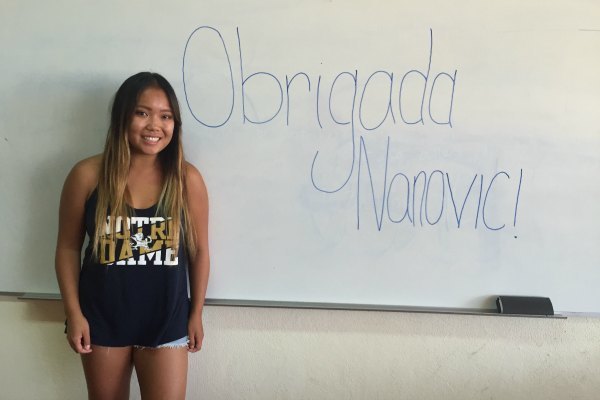 The Pessoa Grant for Advanced Language Training in Portuguese and the Nanovic Institute have not only given me an unforgettable international experience, but they have provided me with an opportunity to get a step ahead in my linguistic education and jumpstart my career in interpreting romance languages. Studying abroad in Lisbon strengthened my Portuguese proficiency by allowing me to supplement my Brazilian Portuguese education at Notre Dame with real-life exposure to Portugal’s unique dialect. Equally important for a wide range interpreter is the ability to understand different cultures, which is why my experience in Lisbon was incredibly valuable. Overall, studying abroad in Portugal significantly contributed to both my professional and academic career and I am thankful for the opportunity provided by the Nanovic Institute.