Lucia Manzi (Ph.D. candidate, Political Science) presented her paper, “New Convictions: Italian Judicial Networks, Mafias, and Corruption Trials,” at the 25th International Conference of Europeanists in Chicago. In her paper, which she presented with the support of the Nanovic Institute, she argues that the prosecution of criminal systems in Italy has been aided by relationship-building between judicial actors, social activists, and legal professionals in outside jurisdictions. To make her argument, she focuses on the methods of judicial governance in Sicily and Calabria, two Italian jurisdictions with pervasive criminal activity from mafia organizations.

This experience allowed me to network with European scholars whom I would have not met otherwise, to get feedback on my paper from a varied audience, and to explore the latest developments in European research on topics like party politics, populism, and migrations.

The Nanovic Professional Development Grant allowed me to present my research at the 25th International Conference of Europeanists, which took place in Chicago from March 28th through March 30th. At the conference, I presented a paper entitled “New Convictions: Italian Judicial Networks, Mafias and Corruption Trials.” The paper draws from two case studies in my doctoral dissertation, namely two Southern Italian jurisdictions: Palermo and Reggio Calabria. The paper explores the factors promoting the effective judicial prosecution of complex criminal issues, particularly organized crime and corruption. Thus, in the paper I explain the different judicial performance of these jurisdictions in the prosecution of these criminal issues over time, specifically from the 1970s through the 1990s. 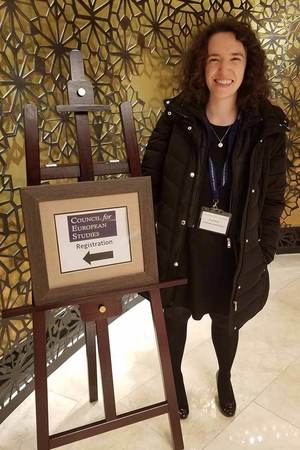 My goal in attending the International Conference of Europeanists was to workshop my work in order to receive valuable feedback from scholars with a clear regional expertise. The International Conference of Europeanists, which is organized by the Council for European Studies, brings together scholars working in different fields, from anthropology, to sociology, to political science, who share the same focus on European events. In addition to focusing on a European case, my research lies at the intersection between legal studies and comparative politics. For this reason, presenting my work to an audience of European scholars with different areas of expertise could be a great opportunity to receive helpful comments on how to improve my paper before its submission to an academic journal.

My experience at the International Conference of Europeanists exceeded my expectations. The panels I attended were truly interdisciplinary, in that they brought scholars with radically different areas of expertise together, to discuss the same topic from different angles. The panel at which I presented my paper focused on different legal processes within the European Union, presenting a variety of perspective. The way in which the panel was structured fostered discussion among panelists, with an in-depth examination of each other’s topic and with a lively exchange of questions and suggestions on our papers. Moreover, discussion before and during the panel was very helpful and informative. For instance, the panelists and I exchanged ideas about other conferences, particularly in Europe, in which we could workshop our papers in the future.

The discussion with the other panelists was extremely helpful for the purpose of receiving feedback on my paper, getting to know scholars I had never met before, and broadening my knowledge of the European academic world in general.

Finally, attendance at the International Conference of Europeanists positively surprised me in more than one way. For instance, it was surprising and interesting to explore different perspectives on research topics that I have always considered familiar, such as European politics. It was also a positive surprise to see that academic discussion on these topics could bring together scholars from such different fields of work, for the purpose of a truly interdisciplinary dialogue. Overall, this experience allowed me to network with European scholars whom I would have not met otherwise, to get feedback on my paper from a varied audience, and to explore the latest developments in European research on topics like party politics, populism, and migrations. For all these reasons, participating in the International Conference of Europeanists was extremely helpful to my professional development.