What's the link between the Optics by the English scientist Isaac Newton and a discipline like Philology? The link is the work of an Italian philosopher of the 17th century, who spent almost his life in Naples and has been lately recognized as one of the most influential thinkers of the modern era: Giambattista Vico (1668-1744). Lorenzo Dell'Oso (PhD in Italian, 2nd year) has spent one week in Naples to investigate some of the graphic and textual issues of Giambattista Vico's masterpiece, the New Science.

In the second and third edition of Vico's New Science (1730 and 1744), Vico inserts a graphic representation of his philosophical system called Dipintura. In these two editions, the Dipintura has some graphic differences, although it represents the same scene. In addition to the graphic representation, Vico also explains the meaning of the Dipintura itself, which is partially different in the two editions (namely, these are textual variants). What are the reasons that led Vico to make these changes between the two editions of the New Science? What happened in his intellectual life between 1730 and 1744?

The only scholar who, in the 1960s, started to define the differences between the two editions, was Franco Lanza, even if he did not pay attention to the variants I have looked at. Besides him, no other scholar has investigated systematically the textual and graphic differences between the two Dipinture. By focusing on the two Dipinture, I hope to demonstrate that, during the 1730s, Vico elaborated a new idea of "authorship," on which he will base his "philology." This way, Vico abandoned the Newton scientific thought that he had adopted before, in the New Science of 1730. This could be one of the reasons that would explain the textual and graphic variants between the two Dipinture.

During my research trip, I consulted all the twenty-three 1730 and 1744 New Science editions kept at the Biblioteca Nazionale "Vittorio Emanuele III" in Naples. Moreover, I looked more in detail at other features of the two Dipinture, in particular at the graphic representations of Homer and of the beam of light, and at their textual explanations as well. I can state that the beam of light of the two Dipinture is actually different between the two editions. Also, I consulted the famous manuscripts of Correzioni terze (1731) and Correzioni quarte (1732-1734), written by Vico himself for the printers, just after the New Science edition of 1730. I believe that the change of the adjective related to Homer (from "writer" to "author") should be placed between the second half of the Thirties and the first half of the Forties, since it does not appear in the Correzioni. Moreover, during this time, Vico could have better defined the concept of "authority," which is anticipated precisely in a correction inserted by Vico in the Correzioni terze (f. 4r). In these same manuscripts, I could also find several annotations that Vico addressed to the printer, the composer, and the illustrator. This fact shows that Vico had a semi-maniacal attitude in the publication of his texts and that he was very demanding in the representation of the Dipinture. All these elements contribute to validate (but not to demonstrate) the hypothesis that Vico personally interfered and directed the depiction of the Dipintura of 1744. 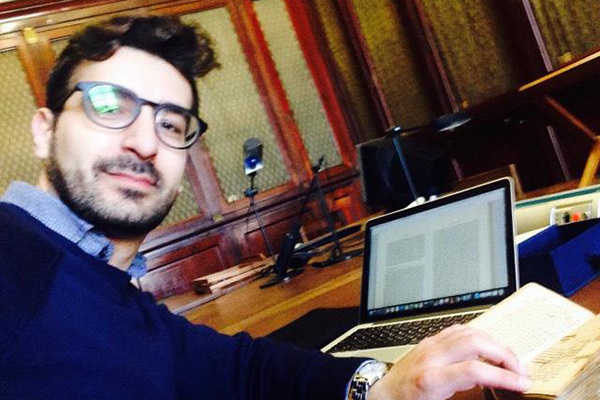 After having focused on Vico's Dipinture, I analyzed many other Dipinture of philosophical, legal-economic, and religious texts of the Seventeenth and Eighteenth centuries. This comparative study has showed that these allegorical reproductions were widespread in Naples in the Seventeenth and Eighteenth centuries. This evidence delineates, on the one hand, the choice of Vico in a specific cultural context, and on the other, it also demonstrates Vico's receptiveness in respect to the various cultural stimulus of his own city. Finally, in the Biblioteca Nazionale of Naples, I also explored the history of Newtonian texts in Naples in the early Eighteenth century, and I found several copies of the Latin translation of Newton's Optics. In particular, I obtained some reproductions of the tables contained in the volume, which clearly explain in detail the refraction of the beam. My hypothesis is that Vico had direct knowledge of Newton's Optics and that, on the basis of the reproduced tables, chose to depict the radius in a very precise way. This last statement can open new perspectives on Vico's intellectual formation in Naples.

I collected all the aforementioned materials in order to reinforce the argument of an article I have written on Vico, entitled "From philology to typography: about two variants between the Dipinture in 1730 and 1744 New Science," which was already accepted with revisions by the International peer reviewed journal Historia Philosophica. An International Journal. The article has already received very positive feedback by important Italian Vico scholars, such as Manuela Sanna, Fabrizio Lomonaco, and Alessia Scognamiglio. In Naples, I was able to meet personally with all of these scholars and have a discussion about my work. In particular, prof. Manuela Sanna let me attend the Biblioteca del Centro di Studi Vichiani, where I was able to spend a day studying and working on my article. Generally speaking, I strongly believe that this week of research in Naples was key not only for the completion of my article, but also for the creation of a network with leading scholars in Naples, and, most importantly, for my growth as a Vico scholar. Thanks Nanovic Institute for this wonderful experience!