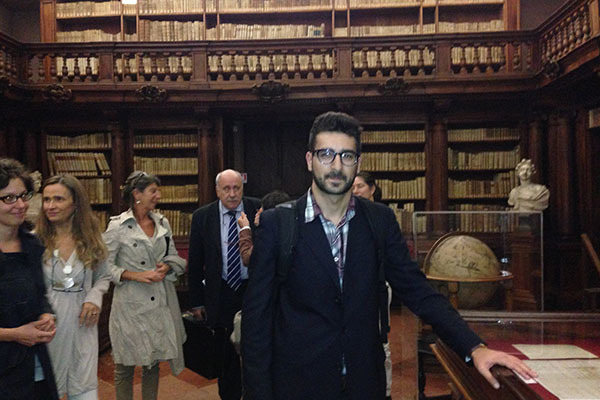 At the Nanovic Institute, we know that networking is vital for graduate students who will one day be applying for jobs or for further graduate studies, and we're proud of the fact that we help ambitious graduate students make vital connections. Lorenzo Dell'Oso is a good example of this. We awarded Lorenzo, who is working on a Master of Arts in Italian Studies, a Graduate Professional Development Grant to present his research at a conference in Lucca, Italy. Here is what he has to say about his experience.

My research interest is the interconnection between Early Modern Italian Culture and Print History. This interest is closely related to a discovery I made in September 2013. In the Rare Books Special Collection of Hesburgh Library, in fact, I found several unpublished poems and prose texts, in Italian and Latin, in cod. lat. d. 5. Soon I published a short article on this manuscript in the Italian journal Studi di filologia italiana, and the American journal Textual Cultures has expressed interest in receiving the full edition of the texts. Among the texts in the codex lat. d. 5, I found three unknown vernacular compositions (two prose texts and a “terza rima” poem) against print culture, which I was able to attribute to the humanist and Dominican friar Filippo da Strada (ca. 1450-1505). In December 2014, an article on the topic will come out in the international journal of printed texts Tipofilologia. These vernacular compositions will also be the subject of my Master’s thesis, directed by Prof. C. Moevs, in collaboration with Prof. Ted Cachey. My analysis starts off with philological and material data (transcription and edition of the texts) and only then moves to propose an interpretative reading of the pedagogic role that manuscript texts claimed for themselves (in comparison with and contrast to printed ones) in Early Modern Italian Culture. Since Giuseppe Martini himself owned several manuscripts by Filippo da Strada, it was essential for me to attend this conference and listen to papers about several aspects of Martini’s cultural activity: among these, for instance, I realized that other important manuscripts (which I didn’t know before) were written by Filippo.

In Lucca I had the opportunity to present my research in front of a few of the best Book History scholars. Among these, in particular, I met scholars such as William Stoneman and Edoardo Barbieri. The first one, who is librarian at Harvard University and one of the most important book historians, congratulated me for my work and further discussed the topic of my paper with me. The second one, Professor Edoardo Barbieri (Catholic University of Milan), already had helped me in my research on Filippo. After meeting each other and talking about future research, he even offered me to collaborate on the International peer-reviewd journal La Bibliofilia – which he directs – by writing a few book reviews of most important American books in Book History. Besides Stoneman and Barbieri, I met great international scholars in the field of Book History, such as Piero Scapecchi, Marco Paoli and Klaus Kempf. They all gave me very useful suggestions also about my future studies, like suggesting a few places to apply for a PhD in this field of study. Furthermore, for me it was great to be updated about the most current scholarly developments of book history in Renaissance Italy. Therefore, these two days have definitely influenced my future as a scholar and researcher. Thank you so much, Nanovic Institute!