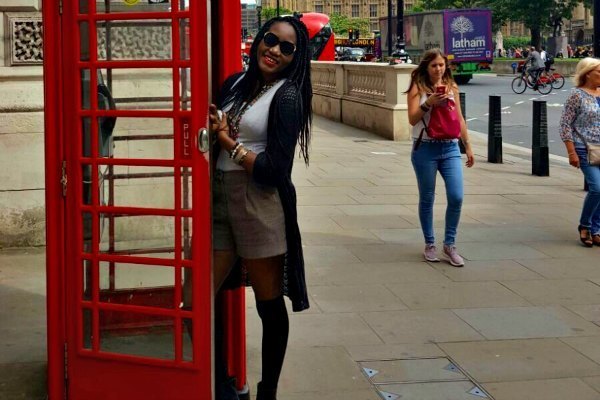 Congratulations to Leslie Omeeboh ('18), the winner of The R. Stephen and Ruth Barrett Family Grant for Best Undergraduate Travel & Research Proposal! Leslie--a triple-major in Neuroscience & Behavior, Pre-Health Studies, and French--used her grant award to travel to London last summer to study the legacy and development of healthcare in British colonies. She recently wrote to us about her research:

Healthcare development in Nigeria has had a history inextricable with that of British economic expansion. The main factor that informed British presence in Nigeria was the search for natural resources and cheap labor, and the expansion of the British Empire. The need to efficiently control Nigeria’s resources and peoples led to eventual colonial rule. Consequently, infrastructural changes were made to better export and exploit goods and services for the benefit of the empire. In order to better understand the development of healthcare, it is important to first understand its origins in British colonial Nigeria. After their arrival and initial evangelism in what is today Nigeria, the first priority of the missionaries and other British officers stationed in Nigeria,was to establish dispensaries to, somewhat, adequately care for their health and wellbeing against the tropical diseases of the unknown climate and indigenous population. As time went on, they established a few hospitals, whose primary purpose was to sustain a healthy labor force, augment conversion of the natives through ‘supernatural’ healing properties of western medicine, and proper treatment for the increasing population of British citizens. Again, with the passing of time, various other plans were implemented to usher in healthcare development to Nigeria and her peoples, but for the economic gain of her colonizers. These development schemes are of extreme interest because they, and the aforementioned history of health systems in colonial Nigeria, provided the foundation by which the current Nigerian healthcare systems are based. Thus, it is of extreme importance to understand, disseminate, and explore said systems in an attempt to diagnose or pinpoint the origins of the woes of the system that exists today.

There are papers and articles written on either precolonial healthcare systems, or the first hospitals/dispensaries, or critiques of the development schemes, with particular attention to healthcare. However, this information has not been synthesized with corresponding evidence and credible research to directly identify the relationship that exists between their implementation and the current state of public health and health systems in Nigeria. My research aims first to map the history of healthcare, secondly to identify the factors that contributed to the various developmental stages, thirdly to identify and analyze the developmental periods and schemes, and finally to determine if a causal relationship exists between the history and the current state of healthcare in Nigeria.

Originally, I planned to visit the National Archives (TNA) in London and the London School of Hygiene and Tropical Medicine (LHSTM), as they seemed most appropriate for my work. Unfortunately, the LSHTM only contained disease-specific information and documents on colonial southeast Nigeria, which were of no particular use other than they supported a fact already known to me: the British treated the natives due to fear of their own well-being and to sustain a labor force. It is often thought that the first development plan began in 1946, at least its implementation. However, prototypes and various forms of it existed and were widely discussed within the colonial administrative powers, in close correspondence to the England home offices who were to provide the funding necessary, beginning in 1930. This knowledge, although new, came as no surprise as it is fitting that the conception of the first clearly outlined developmental scheme came after the World War I and its implementation began a year after World War II. As the many correspondences intimated, economic revival was necessary for Britain after World War I. Nigeria with its natural resources and high population density was one of the more profitable and economic colonies. It produced goods that were not in competition with the white settler agrarian colonies, which meant that it avoided the worst of the excesses of the depression in the 1930s, which therefore failed to impact its exports and productions. In response to the depression and the need for economic revival, Britain increased its exportation of goods and services and simultaneously developed infrastructural and social schemes to increase productivity and training in various sectors for her Nigerian colony. The ten-year plan, as it was later dubbed, entrusted the colonial administration with the task of allocating national resources and funding to activities and tasks  that would engender improvements in the general health and mental conditions and faculties of the people. This, of course, included the physical facilities that would make such improvements possible but with a slight caveat: these facilities would only meet the minimum requirements for the general improvement of the country and its population to avoid unnecessary expenses. Although I could not find the exact provisions for the scheme, I discovered that it was meant to last until 1954. Additionally, the plan seemed to be largely “successful,” from the colonizer’s perspective, although its utility, economic value, and general worth were greatly questioned. It therefore is no coincidence that Nigeria was federated in 1954, with increasing talks of independence and decolonization.

A second plan, the “1955-1960 plan,” also known as the five-year plan, emerged amongst talks and negotiations for independence. Although not as elaborate as the first, it was still rigorously pursued and largely implemented, though haphazardly, in my opinion. As independence approached, some British expats stayed in Nigeria to ensure that Nigerians would smoothly take over administration of various sectors, including healthcare. However, due to the underdevelopment of the many health sectors and the retrospectively minimal preparation of Nigerians, independent Nigeria requested help and medical resources and equipment post 1970. Fittingly, as the correspondences clearly enunciate, the British offered their help, as they did during the 1965 civil war, only for economic gain, a recurring theme in British-Nigerian relations. This led me to question the value or quality of the professionals sent back to train Nigerians, and the quality of the equipment and resources provided to Nigeria and how this may have contributed to the underdevelopment of health services in Nigeria.

The abovementioned findings do three things for my research:

1.      They present British intentions and goals towards medicine and healthcare in Nigeria.
2.      They engender questions about implementations, successes or failures, and manifestations of said plans in Nigeria, as told by the Nigerian people.
3.      They instigate a thorough exploration of existing work, keeping in mind the inherent bias of intentions and colonialism. They also provoke further research into British goals of health development for her other colonies with less successful economies, and other varying factors, in order to seek the existence, or lack thereof, of a relationship to Nigerian medical tourism.

The findings are largely in keeping with existing literature on the subject. However, its contribution will be a synthesis and analysis of historical factors that have continued to cast a shadow on Nigerian health systems.

This experience has been very informative and also very humbling. I am very glad that my first field research experience involved independent archival work and study as it reinforced the importance of patience and the joys of discovery and served as a great reminder that academic pursuits are not without tremendous frustrations. Additionally, the largely independent nature of this experience gave me many an opportunity for introspection and reflection on my reasonings for pursuing the research, what I hoped to find, and how I would cope if plans do not go accordingly. For this I am truly grateful. This stage of my research has enabled me to envision stage two: the study of the manifestations of development and health schemes in Nigeria. This of course will be supplemented with research on other factors that may have contributed to the successes or failures of said plans and their impact on the state of Nigerian health systems. My time in London has also cemented my desire to pursue an MD/MPH degree upon graduation from Notre Dame so as to continue to encourage discussions and critiques of public health in Nigeria and other nations.

I am extremely thankful to the Nanovic Institute and to the R. Stephen and Ruth Barrett family for their generosity and faith in my potential and my research. Words cannot describe my appreciation for such kindness and support.