Lea Hix '17, a double major in psychology and pre-health, received a Senior Travel and Research grant from the Nanovic Institute to explore the experiences, acceptance, and integration of the role of physician assistants in Germany.

According to U.S. News, the physician assistant (PA) is voted the overall 3rd best job in the U.S. for 2016, with high utility, flexibility, and associated quality of life [1]. The PA’s scope of practice includes many of the same responsibilities as a physician, with the ability to see up to 80% of the cases that a primary care physician can see [2, 3]. Although the profession has exploded since its introduction to the American healthcare system in the 1960s [4], PAs are not as popular in other countries, existing only in a handful of countries outside the U.S. [2], including Germany, with its first program starting in 2009 [5]. While other countries have adequate research on the developing profession, only two articles on German PAs are accessible for reference [5, 6]. Germany is the economic powerhouse of Europe, with unique and powerful influence both financially and politically on other European countries [7]. Thus, the development of the PA profession in Germany is pivotal in furthering profession's expansion from the U.S. internationally. To learn how the PA profession has been implemented thus far into German healthcare, I traveled to various cities within one German state to interview German PA students, practicing PAs, doctors, and hospital and program directors. I gathered different personal viewpoints on the acceptance and integration of PAs in Germany, their education process and clinical capabilities, and the factors presently limiting further growth of this profession throughout Germany. 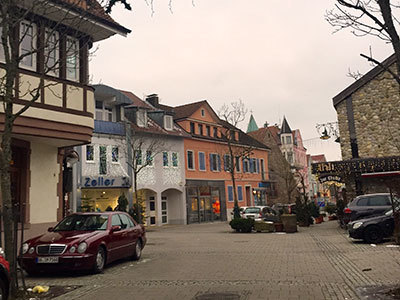 The shocking deficit of information available on German PAs provides a very small research base for anyone attempting to learn more about the recent implementation of PAs in Germany. After a thorough search through various scientific databases and on search engines, I was only able to find two journal articles on PAs in practicing in Germany. One article, from 2011, provides a very small section of information on German PA programs and motives behind starting them [5]. The second article, from 2013, discusses PA education in Germany, providing program statistics and an overview of the need for as well as evolution of the profession [6].

These articles provide basic facts on PAs and their existence in Germany, but fail to give any qualitative information that would help readers understand the daily work of a German PA, or the personal, social, or societal obstacles inhibiting the profession’s expansion. My research, as the first of its kind, has explored these themes, identifying avenues towards new research questions that future studies can investigate systematically.

Many of the medical professionals I interviewed coincided on many topics, while also giving insightful input complementary to the others’. German PAs obtain patient history, take the physical exam, suggest which diagnostic tests to run, analyze results, and suggest treatments. Because PAs cannot legally prescribe or order most diagnostic tests, unlike the vast majority of states in the U.S., the doctor then must confirm these suggestions before various decisions can be made. German doctors and PAs commonly described their work as “like a team—whoever has time to do it can do it.” The extent to which these PAs were independent varied between hospitals. For example, in one hospital, the senior physician described one PA as “working like normal assistant doctors here…She’s very good, she works totally on her own” while in another location a doctor said “PAs will keep supporting me, but they will never be completely alone… You can be independent, but you have to know your limits.” In every place I interviewed, everyone agreed that most of the doctor intervention on the PA’s work comes in the form of a brief discussion or signature either confirming or adapting the PA’s suggestion for a test or treatment, thus allowing the PA to work fairly independently. However, the doctor is always the head surgeon performing the key procedures, and is always the final ‘say’ on end treatment—to stay in the hospital, have surgery, go home, etc. German medical laws are generally vague, aside from a few that explicitly limit some specific tasks to doctors, and the country’s medical laws don’t mention PAs at all—this is can be good and bad. It allows some doctors to have “a bit of range” when defining the PA role, giving PAs more responsibilities in certain hospitals, but can also allow others doctors to interpret it strictly, limiting what PAs are able to do elsewhere. As one PA said: “Here in Germany, this occupation has a lot of law problems… [PAs] are allowed to do a lot of things that are more dangerous in my opinion than signing a sheet of paper [for prescriptions or diagnostic tests]… I think it’s a great problem…It’s really impractical.”

Some patients in the U.S. have concerns about seeing a PA versus a “real doctor,” but they usually end up very satisfied, with equal health outcomes, with the care they receive by PAs [8]. Patients don’t seem to have reservations about seeing a PA in Germany, and this could be in part because most Germans don’t know what a PA is. One PA said: “Nobody knows about [PAs] in Germany…When I started I always tried to explain what my profession is, but nobody understands it… So I stopped trying to explain.” Every PA I interviewed said they’ve never had a problem with patients complaining or asking for a doctor. “I think they have the feeling that they are treated well… If they’re healthy afterwards then they are happy,” said one PA. Another said, “For the patient it’s important that I’m friendly, that I hear their problems, and that I’m taking them seriously.” The PA has become a key component of American healthcare systems, and it would be shocking if any American medical professional did not know what a PA is. A German PA program director stated: “The German hospitals that are working with a PA are really convinced of the concept, but most hospitals, doctors, and nurses don’t know anything about the PA profession.” A different program’s director said that “people who work with a PA are happy, but with so few in Germany there are not that many people that work with PAs. So it’s simply a question of not knowing.”

The main reason why more people aren’t becoming PAs is clearly because they don’t know about it, but there are other factors that might discourage nurses or other healthcare professionals from attending a PA program. PA students don’t pay for school, as they do in the U.S.—they complete a 3-year “dual” work-study program sponsored by a hospital and actually earn money during their PA training. “The problem is that they earn good money as a nurse, then have to stop work and go back to the university for 3 years, and earn much less money for the these 3 years [in school],” which is, as one PA put it, “basically enough to live off of so you don’t have to work somewhere else.” When these students finish and return to the hospital as a PA, they “only earn a little bit more money. And that’s hard.” Multiple PAs complained that the salaries are lower paying than they would expect, and that “It’s not a very big benefit,” financially, to become a PA: Unlike for doctors and nurses, there are no pay scale laws for PAs, and as a result, salaries are “difficult to negotiate because we don’t have a basic required salary. We do jobs like a doctor in the first year of school. I think we should have a higher salary, because we also have 6 years of training.” One PA even said—“and then I think, ‘OK then I didn’t need to study for 3 years.’” To increase the desirability of the PA profession, pay scale laws or a guaranteed minimum salary for PAs, could be created as an better incentive to join the profession.

As one of the fastest growing professions with the best job outlooks, PAs are making U.S. headlines. Many hospitals are using PAs as a solution to an increasing need for healthcare providers to serve an aging population, who practice at a lower cost to employers with equal patient outcomes within their scope of practice [8]. These same factors are influencing Germany, as well as the need to have a “stable position” functioning at a high level of expertise between doctors and nurses. “[Having PAs] works much better than having a few young rotating doctors… That’s one of the advantages to have a PA—It’s good to have someone by your side that just knows what to do. It’s very efficient and is a high standard of practice,” one doctor said. PAs have also been found to be beneficial for patient care in Germany: “There is no rotation with the PAs, so they are on the ward everyday… [Our PA] is there as a stability factor for the patients.” One owner of a PA school states: “You see that physician assistants are common in other countries and that it’s a successful approach, so the real question is why doesn’t it happen in Germany?” The more widespread PAs become, the more other countries will realize their usefulness in mediating the demands of modern-day healthcare—Germany is just another key step to global prevalence of this profession. “With the experience that we have [with PAs], there are no doubts that it will be a success.”

The PA profession isn’t just important in the U.S. and growing in importance throughout the world, it’s important to me. As a Senior at the University of Notre Dame I will be attending PA school in the fall of 2018, graduating just two years after that to start my life as a PA. The responsibilities and lifestyle of a PA is a perfect fit for me, but after my life-changing experience of studying abroad junior year I briefly questioned my future due to the rarity of the profession in Europe. After more research and a term paper exploring increasing PA globalization, I learned a lot more and my worries were somewhat eased, but it wasn’t until this self-directed research trip that I was able to really learn about the profession’s expansion. Made possible by the Nanovic Institute for European Studies at the University of Notre Dame, I was able to go on-site to a variety of cities to interview key figures in the German PA movement. I discussed what I was personally curious about, stumbled upon new and intricate themes, found fresh questions for future research, and examined possible solutions, all first-hand. And more personally, I found hope that one day I may really be able to work as a PA abroad, potentially even playing a large role in the international development of the PA profession– and I’ve just taken my first step.