Lauren LaMore is a Masters Candidate in the department of French and Francophone Studies. She received a Graduate Break Travel and Research Grant from the Nanovic Institute to conduct archival research in Paris. Not only was this her first research trip to Paris, but the work that she did contributes to the work of a group of scholars from a small network of universities in the US and France. Lauren recently wrote to us about her experience. 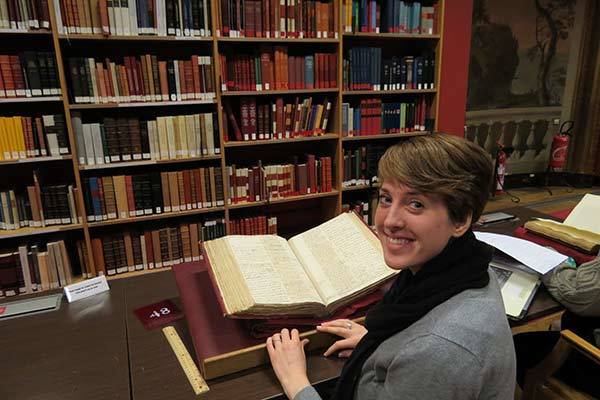 With the help of a Nanovic Graduate Break Travel and Research Grant, I was able to spend a week conducting research in Paris, France during this past winter break. While the research served as a culmination of a History and Philosophy of Science seminar I took this past fall, it was also a crucial stepping stone for the continuation of the projects we began in the class. Our goal last semester was to study and translate Madame Emilie Du Châtelet’s Institutions de Physique, a sort of philosophical review written for her son that was published in 1740. Despite evidence of the Institutions having some influence among Enlightenment thinkers and in the Académie, Du Châtelet never received the recognition as a philosopher or mathematician in her own right. On the contrary, she is generally only recognized as Voltaire’s lover, and she would only be a woman who studied philosophy, physics, and mathematics. Her work was rediscovered in the 1970s, and there is now a group of scholars and students here at the University of Notre Dame, Duke Univeristy, the University of Pennsylvania and with the Centre international d’étude du XVIIIe siècle in Paris who have decided to take on her various works in an effort to promote her as an innovative, intelligent and influential female historical figure.

While I have been to Paris on several occasions, this was my first time going for research, and what an interesting week it was! Despite the jetlag, the cold winter weather, and of course the controversial Charlie Hebdo attacks that occurred in the middle of the week I was there, I was determined to get the manuscript of the Institutions de Physique in my hands and to start working with it. The manuscript is in the possession of the Bibliothèque Nationale de France and is part of the Fonds Français collection. On the BNF website there is a black and white scan of the manuscript available to view in its entirety. However, there are many details relevant to the interpretation of the text, and therefore to its translation, that are not visible in the online version, which launched this research project and guided my work in Paris. Some of these details that are not visible unless handling the physical text include the different colors of ink and slightly different penmanships, indicating that she had a few copyists, some inks and even pencil markings too light to appear on the scan, unclear systems of pagination, pieces of paper adhered to the pages with wax to cover paragraphs that Du Châtelet decided to replace, and finally page types and measurements. Because our goal here at the University of Notre Dame is to publish an English translation of the manuscript, the project is much more than a question of language, but it is also a question of history and the genesis of the Institutions. There are details in the text revealing that Du Châtelet had been working on the text from at least 1738 until 1740, and in my week looking at the roughly 750 page manuscript, I was able to not only track all of these details that are not visible in the version online, and but also to photograph some of the particularly interesting or challenging pages that I may use for my personal research. That being said, while these details may seem small and of little consequence to a translation of the Institutions, they are immensely helpful and important in providing a timeframe for its composition, and in understanding how Du Châtelet’s ideas evolved and what she aimed to demonstrate to her readers.

Now, a few weeks after my return from Paris, the obvious question is “what’s next?” I found all of the information I needed, and because of the length of the manuscript, I now need to work with what I found to answer a few questions regarding the composition of the text. Looking further into the future a group of us have applied for a National Endowment for the Humanities “Scholarly Editions and Translations” grant, with the ultimate goal of taking the translation that we prepared this past semester and producing a full critical edition, based on research that we are doing individually, including my own. As a Masters Candidate in the French and Francophone Studies program, I hope to further my passion for the French language and also questions of translation in the professional world, and this project has been a great way for me to bridge my interests in French language, history, and translation. I am thrilled to be involved in a project that has a much wider goal than the single research seminar from fall semester, and that will only continue to grow as more is discovered about Madame Emilie Du Châtelet and her writings.