Education was used to form a particular national identity for the people of Portugal during the fascist regime under dictator Antonio de Oliveira Salazar. Laura Machado (’17), a double-major in Psychology and English, received a Summer Travel and Research Grant to travel to Portugal to investigate the sentiments regarding Salazar, hoping to compare the perspectives of the Azoreans to the Azorean-Americans who immigrated out of Portugal during the crux of Salazar’s regime. Laura recently wrote to us about her experience:

In what ways did education form national identity during Estado Novo, Portugal’s fascist regime from 1933 to 1974? How did Antonio de Oliveira Salazar’s government use textbooks, teachers, and classroom environments to instill nationalist ideas in the Portuguese people? By doing research on the governmental and educational structures in place during Estado Novo, talking to professors of anthropology at universities in Lisbon, and interviewing the local people in the Azores, I am investigating how perspectives of Estado Novo have changed since the Carnation Revolution of 1974.

Previous research on this topic has largely been done by Portuguese scholars, analyzing national identity and oppression using textbooks, lesson plans, and the education system during Estado Novo. However, I did not find substantial research on the perspectives of the Portuguese people themselves, aside from the perspectives of the graduate students and professors who did the research. Thus, I decided to collect these perspectives, learning about the complexities that they saw in Estado Novo, and understanding how it has affected their lives now, so that ultimately I can incorporate the accounts of the Azorean-American immigrants who left Salazar’s Portugal for America. From what I have learned so far, it seems that the immigrants do not know very much about Estado Novo, and have neutral and positive perspectives about Salazar, while the Portuguese people who remained in Portugal generally have negative perspectives of his regime.

When I arrived in Lisbon, I was not very aware of how significantly the government was involved in education during Estado Novo. However, after talking with two different professors about Salazar and education, I learned that there is still controversy about the values instilled during Estado Novo. The professors and I discussed the ways that textbooks incorporated nationalism and religion, using education to prevent the poor from seeking ways to move out of their social class. I spent a few days at the national library in Lisbon, where I read through dissertations about teacher formation, lesson planning, the department of education, and textbook content during Estado Novo. I also informally conversed with the librarians about their educational experience, which helped me to focus my research. I also had a number of informal conversations with tour guides, shopkeepers, waiters, and local people I met while in the city who were either educated under Estado Novo or were the children of people who were educated during that time. Every Portuguese person I talked to seemed to have a negative perspective of the regime, while also acknowledging that some of the tenets of the system were good in themselves. 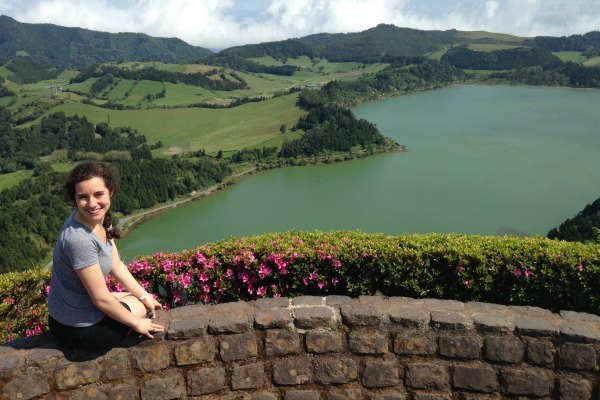 In the Azores, I spoke extensively with the concierge of the hotel I was staying in in São Miguel, who suggested that I interview his father about his experience. Both the concierge and his father told me about their educational experiences, and showed me resources in the regional library that I could use to look further into Salazar’s ideas of national pride and allegiance. In Terceira, I conversed with a married couple who had very different educational experiences, one growing up very poor and the other growing up in a comparatively wealthy family. They each plan to write down their experiences in a memoir-style account using questions that I have written to guide their reflections. I also talked with a woman who was in the education system during the last ten years of Estado Novo. She showed me her compositions, textbooks, and drawings from the time that she was in school, which will supplement the memoir that she will be writing. Her schoolwork demonstrated the content and expectations for education during that time.

Since my dad’s family was part of the group that immigrated to the US during Estado Novo, I was able to informally compare my research of Azorean perspectives to my dad’s and aunts’ perspectives about that time period. My research in Portugal was significant because I identified a significant difference between Azorean and Azorean-American perspectives. I found that the immigrants who left Portugal before the Carnation Revolution of 1974 maintained the perspectives encouraged by Salazar—a strong sense of national pride, maintenance of Portuguese tradition, reverence for religion, and respect for Salazar and his government. It seems that, since they were not present for the Revolution, they were less exposed to the controversy over the government than were the people who have always lived in the Azores. However, Salazar’s values have helped to maintain nationalism and tradition within Portuguese-American communities.

I plan to use my findings from Portugal for my senior thesis, doing a comparative research study that goes further into the differences between Azorean and Azorean-American perspectives on education during Estado Novo. In Portugal, I solidified my study of the Portuguese language, eventually being able to fluently converse with the Portuguese people and reading the textbooks and dissertations that were written in Portuguese. I combined my interests in education, languages, history, and sociology through learning about the impact of Estado Novo on people of Portuguese descent. I fulfilled a lifelong goal of going back to the land where my father was born, using the school that he attended on the island of Terceira as a particular point of study. Through my time doing research in Portugal, I learned about the education my grandparents, aunts and uncles, and my father received before they moved to the US. My Nanovic-funded research showed me how to weave my educational interests with my familial roots, finding connection and intricacy in the people that I am studying.