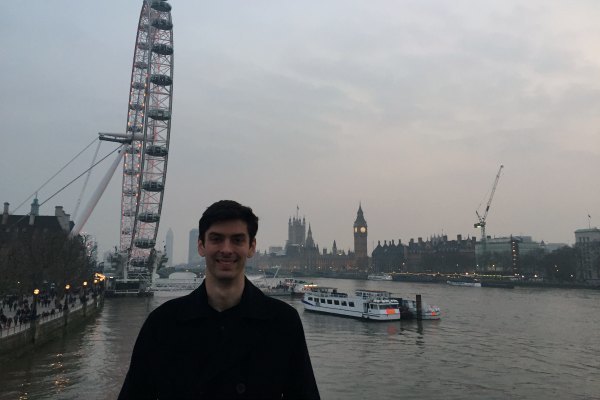 The UK has one of the worst re-incarceration rates in the world, an issue that carries enormous human and financial costs.  Through interviews with social enterprises in the London area, Jon Rydburg ('17), a Finance major, spent his spring break exploring how employment can be found for formerly incarcerated individuals to reduce re-offense--courtesy of the Break Travel and Research Grant for Sophomores and Juniors. Jon recently wrote to us about his research:

In an effort to provide opportunities for formerly incarcerated individuals and battle the enormous direct and indirect costs to the economy of re-incarceration, social enterprises in the UK and worldwide have attempted to integrate these individuals into their workforce, setting them up for future success.  This research centers around learning the best practices of such business and identifying the resources necessary for such businesses to succeeded to create a roadmap for future entrepreneurs and managers to follow.

While a great deal of resources exist to assist formerly incarcerated individuals find employment after leaving prison, there is a severe lack of literature assisting companies who desire to make this part of their business model and hiring culture.  Such companies may struggle to find the most capable formerly incarcerated employees, provide appropriate onboarding and training sessions to properly address deficiencies, and offer opportunities that allow these individuals to capitalize on their existing talents.

One of the most significant insights from my research is the impact of opportunities while these people are in prison on their success outside of it.  The Clink Charity, which operates five restaurants, fully staffed by current prisoners in five prisons in the UK, has never failed in finding a job for their former employees upon their release, assuming they decide to seek employment.  Their program has been linked to a massive drop in re-incarceration rates; only 12% of their former employees end up back in prison, while the national average is around 60%.  Employers are much more open to hiring employees who have gained job-specific skills, proven themselves in a work environment, and have had a chance to gain soft skills in interacting with customers, supervisors, and co-workers.

Building on this theme, most social enterprises in this area do not plan to permanently employ most of their formerly incarcerated employees.  They give these individuals a chance to gain skills and prove that they are serious about finding and keeping a stable job while acting as a sort of vetting process in the eyes of mainstream employers.  This is one successful and proven approach to this risk mitigation issue, though more explanation is needed into other methods of tackling this problem, such as a way for incarcerated individuals to leave prison “with honors” due to exemplary behavior, engagement with educational opportunities, and willingness to work while incarcerated.

This research adds a new perspective to the discussion focused on an intermittent step between incarceration and re-employment.  Social enterprises, in addition to other organizations, can act as a midway point between these two stages for incarcerated people.

Moving forward into my professional life as an entrepreneur, I hope to incorporate these findings into whatever company I run to create the best possible scenario for formerly incarcerated employees to succeed in my company and beyond.