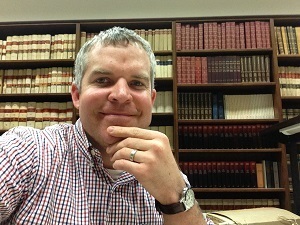 Let's welcome John Slattery to the Student Spotlight! John, a PhD Candidate in Systematic Theology and the History & Philosophy of Science, received a Graduate Break Travel and Research Grant for his winter break research. With it, he spent two weeks in the Archives of the Congregation for the Doctrine of the Faith in Vatican City researching the documents of the trial of John Zahm, C.S.C.. These documents not only tell the history of a founder of Notre Dame, but they help us understand the relationship of the Catholic Church to evolutionary science in the late 19th century. John recently wrote to us about his experience:

In 1893, John Zahm, an ambitious Holy Cross priest, Professor, and Vice President of the University of Notre Dame, expressed unbounded optimism as he began a prolific six years of writing and lecturing on the topic of Catholicism and Evolution.1 Six years, five books, dozens of articles, and hundreds of lectures later, however, Zahm’s great mission would come crashing down.  The Vatican’s Sacred Congregation of the Index—a precursor to the Congregation for the Doctrine of the Faith—censured Zahm’s most popular work, Evolution and Dogma, requiring not only that he retract the book from print, but that he stay away from discussing science and faith altogether.  Ever the faithful priest, Zahm submitted, shifting his ambitions to other areas of political and social involvement.  For the last 23 years of his life, he never again wrote on the possibilities for evolutionary theory and Catholic dogma.

My dissertation research centered around better understanding this pivotal period in the life of Rev. John Zahm, the University of Notre Dame, and, indeed, the Catholic Church.  In particular, my thesis explores the Church’s historical relationship to modern science, epitomized by the acceptance of evolutionary theory, through an analysis of philosophical perspectives of science on the part of the parties involved in a controversy.  In this case: how did the conception of science differ between John Zahm and the members of the Congregation of the Index?  What was the explicit or tacit philosophy of science used by the members of this Congregation, and how did this affect the Congregation’s multiple rulings in the 1890s on the subject of evolutionary theory – John’s Zahm’s work in particular?

During my time in the archives, I discovered that Zahm’s chief accuser—the Rev. Enrico Buonpensiere—had not only written an extensive report on Zahm’s conception of Darwinian evolution, but had written several other reports on evolution as well, two concerning the noted evolutionary scientist Marie-Dalmace Leroy, and one for a book on scientific method by Arturo D’Anglemont.  These reports, combined with the one against Zahm, outlined a conception of science that, as I suspected, reveal the heavy influence of the neo-Scholastic conceptions of faith and reason in the halls of the Sacred Congregation of the Index in the 1890s.

The differences between Buonpensiere’s conception of science and Zahm’s conception of science allow the argument to hold firmly: despite popular belief, even of the characters involved, that Zahm’s inclination toward human evolution caused his censure, the actual culprit for the disagreement was a difference in culture. Zahm’s—and most of late 19th century scientists’—conception of science was rooted in the progressive notions of scientific empirical research established during the scientific revolution, while Buonpensiere’s—and many of the members of the Sacred Congregation of the Index’s—conception of science was rooted in the Thomas-Aquinas inspired notion of “modern science” as but one aspect of the wide range of human branches of knowledge. As such, Buonpensiere’s notion of evolutionary theory was one uncoupled from empirical data, but rooted firmly in—and thus antithetical to—conceptions of theological anthropology and the divine nature of creation.

This discovery will change the story of the Catholic Church’s relationship to evolutionary theory since the Darwinian revolution began.  It is my hope that this story will not be one of proving or disproving individual tenants of evolutionary theory over time, but one instead of accepting the philosophical underpinning which determines our theological approach to science and scientific theories in the future.

This research will play an integral role in my own dissertation, comprising much of my final chapter.  Furthermore, it is my hope that this research will also lead to several conference presentations and published articles in the future.

1John A. Zahm to Edward Sorin, September 6, 1893. Provincial Archives for the Congregation of Holy Cross.