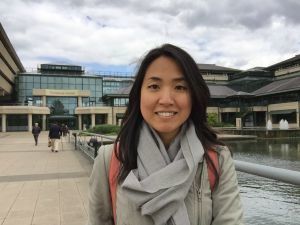 Meet Ji Hye Shin, a doctoral student in the department of Political Science. She received a Graduate Travel and Research Grant to conduct research on her dissertation, entitled "Instituting the Balance: Great Power Politics and Postwar Institutional Architectures in Western Europe and Northeast Asia." Her research involved consulting archival documents in the UK, Belgium, and Italy. She recently wrote to us about her experience:

With the generous support of the Nanovic Institute, I spent three weeks—from May 25 to June 12—conducting archival research in Great Britain, Belgium, and Italy. This research trip was a great success and I expect that my dissertation will substantially benefit from the archival materials that I have collected during this trip. In my dissertation, I seek to explain the disparate patterns of regional institutional development in Western Europe and Northeast Asia since 1945 by focusing on the United States’ and its allies’ top-level foreign policy thinking, as well as their interstate negotiation processes. As such, the primary purpose of this research trip was to locate early Cold War documents that would shed light on what drove the European allies to pursue a multilateral form of cooperation and how.

I spent one week at the Historical Archives of the European Union in Florence, Italy. The EU Archives is housed in Villa Salviati, a beautifully renovated mid–fifteenth century
Renaissance mansion on a hillside overlooking the city of Florence. During my time there, I successfully consulted all of the Jean Monnet collections as had initially been planned. Most critical of my discoveries was Jean Monnet’s personal correspondence with various American political leaders on U.S. support for European unity. It will serve as vital evidence with which to analyze the extent to which the United States and its European partners had converged/diverged in their assessment of the early Cold War strategic environment and the measures to defend their interests.

I also spent one and a half weeks in London and Cambridge, Great Britain. As the two archives that I was visiting had collections that were too large to be examined in their entirety during my stay, my main objective in Great Britain was modest: to find documents regarding British grand strategic thoughts toward the Soviet Union and Western Europe. At the British National Archives, I found some crucial information to that effect. For instance, I discovered a Foreign Office document discussing a pan-European plan to balance the Soviet Union by making Europe into an independent center of power. At the Churchill Archives Center in Cambridge, I found similar evidence in Sir Winston Churchill’s private papers and personal correspondence with preeminent American and British political figures, emphasizing the need for Europe to unite against growing Soviet threats. These documents will form the core evidentiary basis for one of my main theoretical claims that the United States intended to help Europe become a third center of power throughout the early Cold War.

I have collected more than 800 pages of records from this trip, which will play a pivotal role in not only refining my theory, but also enriching my historical narrative. Furthermore, the practical knowledge that I have gained by working with different archival systems and archivists will help me enhance my research skills and expand my resources and interests over the long term. I express my most profound gratitude to the Nanovic Institute for supporting this research trip.