Why do people migrate? As long as the necessity for a better life prevails, as well as uncertainties, such as the state of war, the violation of human rights, environmental disasters, famine, and poverty, we will continue to migrate. Jelena Jankovic-Rankovic, a Ph.D. student in anthropology, received a Nanovic Institute grant to spend four weeks in Belgrade, Serbia to investigate daily practices and the process of identity restructuring under new cultural and social structures, as well as the effect of psychosocial stress on the health of refugees in the transitory state. In March, she will present some preliminary findings at the 25th International Conference of Europeanists in Chicago.

The Institute’s support granted me the opportunity to conduct this pilot study (a fundamental step in my dissertation research), create contacts for future collaborations, establish a foundation for upcoming ethnographic and bioresearch of refugees in Serbia, and to use the knowledge and insights gained as a starting point for developing and preparing a longer-term dissertation project.

Refugee movements are not a new phenomenon; they are usually outcomes of war, conquest or political struggle and are as old as human history. Involuntary migration is always one aspect of broader socio-political, economic, and cultural processes and arrangements. Nationalism, violence and war, and the violation of human rights are just some of many reasons that generate the undeniably relevant context of contemporary (involuntary) human migration and displacement. Involuntary migration entails a fundamental break with well-known circumstances of everyday life and requires renegotiation of identity concerning new sociocultural and physical contexts. Displaced people tend to create a sense of continuity about who they are, by associating themselves in different ways spatially and temporally. It shows the struggle incorporated in creating a sense of self, dignity, and the past when the future is extremely undefined or even endangered. Moreover, refugees who find themselves in qualitatively unique situations and predicaments experience substantial stress which to a great extent affects their health and physiology.

The recent wars and violence in the Middle East and Africa caused a massive displacement of millions of people, who tried to seek rescue far from their homes. During the refugee crisis in 2015- 2016 over a million people primarily from Syria, Afghanistan, and Iraq were forced to leave their homes and cross Serbia on their way to European Union countries. Consequently, Serbia, often seen as a country of emigration, has become a transit country in the chain of intercontinental and transnational forced migration from Africa and the Middle East to Europe. It is important to note that Serbia has already experienced a refugee crisis during the 1990s and dealt with a vast number of people who came from ex-Yugoslavian countries, Croatia and Bosnia, in seeking refuge and protection. 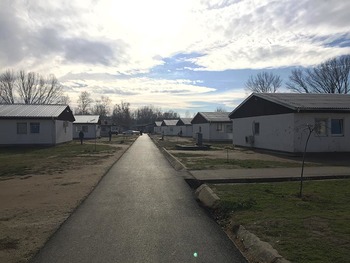 On December 10, 2017, I landed in Belgrade and spent four weeks in Serbia to conduct a pilot study in anthropology towards my doctoral dissertation.

Situated around 10 kilometers from the downtown, the Asylum Center Krnjaca in Belgrade provides a critical site for investigating daily practices and the identity restructuring process, as well as the effects of psychosocial stress on the health of refugees trapped in the transitory state. Besides the center in Belgrade, there are other four asylum centers along with thirteen reception centers throughout Serbia that provide accommodation and other necessary living conditions for refugees. All eighteen facilities are under the jurisdiction of the Commissariat for Refugees and Migration, a separate organization within the Serbian public system.

With the full support of the Commissariat for Refugees and Migration, I got the opportunity to spend time with refugees and conduct my preliminary dissertation research at the Asylum Center in Belgrade. By using established methods in sociocultural (semi-structured interviews and participant observation) and biological anthropology (biomarkers), I collected data from seventy-two participants. The advantage of using biomarkers accompanied by the ethnographic methods lies in the fact that they allow assessment of social and economic landscapes of stress and show that they are highly context-dependent. 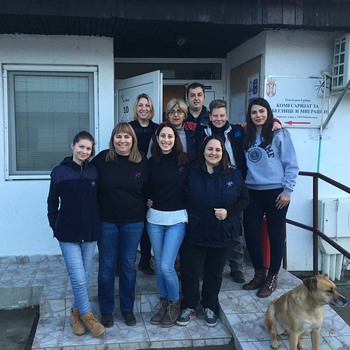 I am grateful to the Nanovic Institute because it made this trip and research possible. Above all, the Institute’s support granted me the opportunity to conduct this pilot study (a fundamental step in my dissertation research), create contacts for future collaborations, establish a foundation for upcoming ethnographic and bioresearch of refugees in Serbia, and to use the knowledge and insights gained as a starting point for developing and preparing a longer-term dissertation project that will investigate migration phenomena in greater detail.

I am looking forward to returning to Serbia for summer to follow up with my research and collect further data that will help me to produce numerous presentations and publications, as well as a well-founded dissertation that aims to enrich our understanding of the identity, human behavioral plasticity, human resilience, and physiological responses to major traumatic events.