Roman engineering is famous for utilizing simple concepts to create beautiful constructions. Jack Assaf (’17), a Mechanical Engineering major, received a Break Travel and Research Grant for Sophomores and Juniors to investigate the engineering behind Villa d’Este, a culminating feat of the Roman’s technical prowess. Jack recently wrote to us about his experience:

Just outside of Rome, the garden fountains at Villa d’Este in Tivoli still work the same way that they were originally designed in the 16th century. With more than 1200 jets of water, some that shoot 45 feet into the air, the question remains: how does it all work? We can see that the system works all day, year round without mechanical power; can modern engineers learn something from this lasting, puzzling display of brilliantly simplistic engineering?

Originally, in 1560, an aqueduct from Monte Sant’Angelo was put in place solely for use at Villa d’Este. The water from the aqueduct was collected in four 1000 m3 reservoirs on site at Villa d’Este and when released, the fountains worked until the supply was exhausted. This supply, however, was not powerful enough for owner Cardinal Ippolito II d’Este, who wished that the fountains ran all day.  Four years later, change was enacted.

Starting in 1564 and continuing through modern times, the power that propels the water through the fountains and cascades of Villa d’Este is located 931 feet away in the Aniene River. The water is transported in a pipe large enough that a person can walk through it. The pipe takes the water directly from the river and channels it through the heart of Tivoli to Villa d’Este, where it arrives flowing at a rate of 1 m3/sec. Converted, the water would fill 500 2-Liter bottles every second.

The water arrives 75 feet above the lowest fountain at the Villa. This creates a tremendous amount of gravitational potential energy within the initial water source that the engineers utilize repeatedly through a cascade effect. Pools collect the water from the upper level fountains, and then release it to other lower level fountains, which use the gravitational potential energy again. This happens repeatedly throughout the garden. Gravity and pressure combine to create the array of shapes and sizes in the fountain displays. 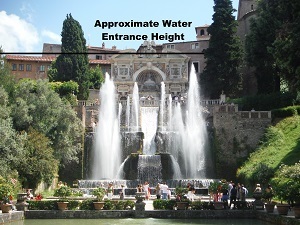 Visual representation of the change in height that is utilized through gravitational potential energy.

Two simple concepts combine to describe the velocity that propels the water so high and in so many different directions. The first concept is the conservation of energy. This can be understood through the dropping of any object. The greater the height from which an object is dropped, the faster it will be traveling when it lands. Thus, since the water drops a total of 75 feet through numerous pipes from its entrance to the final fountain, it gains tremendous amounts of velocity.

The second concept that explains the velocity of the water is conservation of flow rate. Water is non-compressible—it has a constant density— and thus the flow rate, 1 m3/sec, is conserved. Conservation of flow rate can be understood through the everyday syringe. The body of a syringe has a large cross sectional area while the nozzle is small in comparison. The flow rate is conserved so even when the syringe handle is being slowly pushed through the large section, the output velocity through the nozzle is enormous in comparison. At Villa d’Este, the “nozzles” are the fountainheads and the syringe body is the input from the river, thus explaining the remarkable water velocity and high fountains. 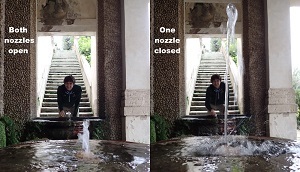 Visual representation of the height increase when the nozzle area is reduced.

Water flowing at high velocities for prolonged periods of time has the ability to destroy what is in its way. Thus, Villa d’Este has had to make numerous repairs to pipes and nozzles that have been damaged or clogged by both calcium buildup and time. Bombs dropped by the Allies in World War II also damaged Villa d’Este. There is more than half a mile of pipes (2870 feet) in the garden and 1200 jets of water all finely tuned to tell stories and convey meaning.  Some of these are the original pipes, made of terracotta, and many of the original metal nozzles have only required cleaning due to buildup.

A valuable lesson in mechanical engineering is learned here. Though the principles are straightforward at Villa d’Este, the implementation and robust design is impressive. This methodology leaves little dependence on measures outside of the designer’s control. Basing the design off of simple principles, namely conservation of energy and flow rate, and using quality materials assures that the system will work.  The challenging part of the design was left to the engineer’s discretion, as the responsibility for the product’s success lies in the decisions and calculations made by the engineer. At Villa d’Este, the calculations are correct, the design is magnificent and everything (still!) works beautifully.

Being afforded the opportunity to research and travel on behalf of the Nanovic Institute for European Studies at the University of Notre Dame was a rewarding, valuable experience. Two years before this trip, after my freshman year, I visited Villa d’Este as a tourist. Having wondered about the beauty and awe of the fountains while simultaneously learning about fluid flow rates and conservation of energy in the classroom created a sense of accomplishment after completion of my research. This feeling of accomplishment stems from finally understanding exactly how a beautiful system, previously only seen from the outside, works.  Being able to see the pipes and touch the nozzles provided an extra level of comprehension that I had hoped would lead to complete understanding, but now I am even more in awe. The attention to detail, precision in design and utilization of naturally existing energy that I saw at Villa d’Este will serve to make me a better engineer.