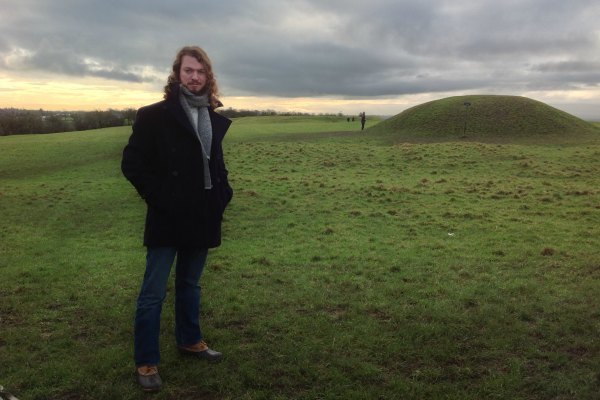 It’s not actually difficult to find a person who thinks architecture should fit the place it’s situated in, and not simply be the most individually expressive building possible. Greg Young ('16), an Architecture major, received a Senior Travel and Research Grant  to research what the architectural style for a Roman Catholic cathedral in Dublin, Ireland would be, given that its Georgian context expresses its history of English and Protestant oppression. Greg recently wrote to us about his experience:

For over eight hundred years the people of Ireland were subject to the English crown. What ironically started with an Irish king seeking help from Normans (shortly after William the Conqueror defeated the Anglo-Saxons) in his bid for rule of a united Ireland, ended with the most fertile lands reserved for English nobles and the subjugation of a people considered uncivilized. While the people were oppressed, though, the cities grew to proper urban centers and Dublin became the second city of the British Empire, surpassed in size and grandeur by London alone. And as the Protestant Reformation found a home in England and enemies in Ireland, the distaste became more against Catholics than simply against Irish at a time when the Empire was at one of its heights. Dublin is a city of primarily Georgian architecture developed by a Protestant Overlordship in a country historically dominated by Catholics. So how would one build a Catholic church? When the dominant architectural language tells an anti-Catholic narrative, how do you maintain the sense of the place, maintain the character, without contradicting the message you mean to get across?

This isn’t the only time that “contextualism” has come up as an issue, of course. Romanesque builders thought they were getting something like the Romans, but the Gothic didn’t think so: their pointed arches, flying buttresses, and attenuated proportions go quite against the classical idiom. Most thinkers of the Renaissance felt the period before them was that of barbarians (Goths ergo Gothic), not civilized people, though there are much finer considerations. Bramante, for example, profoundly changed his “style” in Rome from that of his earlier career in Milan. Some of this can be attributed to his own development, but not all. Rome has a gravitas, a history and a context that demands a certain seriousness and formality which Milan neither demands nor, in some ways, provides for. Michelangelo too could be said to work somewhat differently in Florence than Rome, in the former taking a more planar approach and the latter a fuller more three dimensional one. But there’s one individual project that stands out for the issue. San Petronio in Bologna is a medieval church which didn’t get its façade when the interior was built. A competition was held in Palladio’s time for which there were both Gothic and Renaissance proposals, the former seeking to maintain the original style of the building, the latter to impose what was viewed as “objectively” better. And some of course tried something in between. Each one of these approaches will have advocates from now until the end of time, and nobody will ever settle it for certain. That’s because regardless of the deficiencies of each approac,h they all also have great merits.

I originally was searching for ways in which to make a building truly art as opposed to simply brick and mortar. Once somebody sets a building plan down in a pattern book, it’s all but impossible to make architecture from that plan anymore, because there’s nothing different, nothing unique. It becomes almost like pop-art: perhaps good, but mass produced and mechanized into thoughtless pleasantness. When I started researching, first in books, later physically on site in Dublin and around the country, I found that almost none of the prominent architecture in Ireland wasn’t English. Even Saint Patrick’s Cathedral is clearly derived from early English Gothic churches, viz. Salisbury Cathedral. I had to go back further to the Romanesque, before even the Vikings came, to find an authentically Irish architecture, and then earlier still to the great Neolithic structures built before the pyramids. These mound-tombs are built in such a sophisticated way that despite their age and the consistent Irish climate they still don’t leak (cf. Frank Lloyd Wright).

So in the process of seeing what Dublin is, Ireland’s first city, blooming under English overlordship under the four Georges, and what Ireland was, an island culture so in touch with itself that Christian saints and pagan goddesses might be the same person, I may have found where I fall on the two big questions above. One can bring together things seemingly disparate and by so doing say something different from what each one may have said independently. Simply reapplying Romanesque architecture, Ireland’s age before conquest, to Dublin would ignore what happened since, and give a head scratching moment to almost anyone who passed by, certainly the educated. However, building a Catholic Cathedral, in historically one of the most Catholic countries in the world, in a decidedly protestant tradition, makes little sense either, and even tells something of a falsehood. Finding a way to bring them together allows me to both fit into my context by the materials, proportions, and architectural elements typical to the place, while also finding things objectively Irish and Catholic (like the Irish round tower, or five-aisled basilica) to create something certainly different though not altogether out of place. Something that is different, and isn’t afraid to be.

From my view this isn’t a new approach so much as an improvement on one that has long existed. Plenty of people try to blend architectural styles but tend to do so whimsically. They do it simply because of what they like, and what’s around them, rather than to express fundamental individualities. These unique aspects, in this case a difference of faith and nationality, allow a much richer dialogue between “styles” like the interplay of iconography and symbolism, rather than something so blunt as pointed arches vs. rounded.

These realizations have come through my study in Ireland and through working on my thesis design itself. Naturally, one has an idea about how things will impact them in the future, but we don’t quite understand them until it happens to us. My research has allowed me two important things. First, it allowed me the practical situation of being able to see my project site in person, to document it at different times of day and week. Second, and more interestingly, it allowed me the opportunity to interact with Ireland’s physical history from a broad range of time periods, and to extract some of the consistencies throughout time and apply them today. I now see what the English imposed on my site, what the Irish did in other places earlier, and that allows me to work at my goal: how to get the best of both together without losing either. My work is cut out for me.