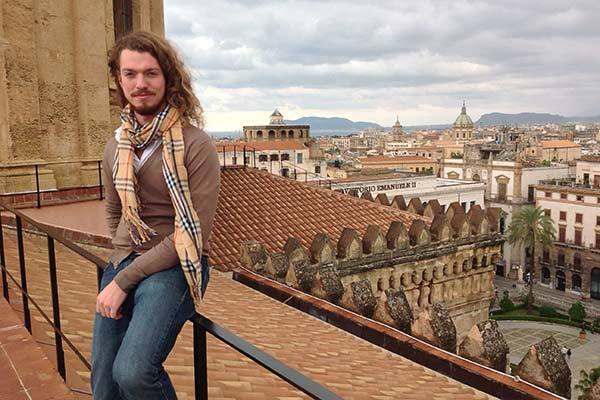 Many people did and do believe that the expressive capacity of the classical tradition in all arts has been exhausted. Greg Young ('16), an Architecture major, received a Senior Travel and Research Grant to research the confluence of meaning--primarily around ecclesiastical architecture in Sicily--in preparation for his thesis. Greg recently wrote to us about his experience:

In high school, I asked a music student what the point of atonal music was. Why are people making music that deliberately sounds bad? “They thought”, he said, “that there was nothing left for tonal music to express. It had reached its limits.” Having been interested though ignorant of the Western Tradition at that point, I wasn’t satisfied with the reason, but couldn’t give much of an argument otherwise. After all, where does one go after Rachmaninov? Eventually I landed in architecture school at Notre Dame where others felt the same as I do, but had something of a response to give. But it was a bit of a cursory answer, along the lines of “No, we can still express things with the old languages, in the old Tradition. Furthermore modern traditions (atonal music, glass and steel architecture, etc.) is really expressive of only a small range of things, and so it’s not much of a response.” For me it’s all well and good that we can express meaning, but how do we do it? How do we express culture, morality, mood, theology, spirituality, or even individuality without simply repeating what was done in the Renaissance? How do we fulfill the intellectual curiosity that Frank Lloyd Wright demanded at the beginning of the 20th century while maintaining tradition?

Through most of the past two centuries, and having roots even earlier, people have valued originality and “newness” over tradition. A lack of acceptance in the French academies drove Impressionists to disregard the institution and maintain what they felt was superior, even though unvalued by their contemporaries. Arnold Schoenberg, instead of maintaining the tradition of Western tonal/classical music departed into his twelve-tone system, and architects like Le Corbusier, Frank Lloyd Wright, Mies van der Rohe and Walter Gropius, though all trained in the classical tradition, left it behind for their own values of expression. While respectable for many things, chiefly their quest for integrity and disgust with superficiality, I find these lacking chiefly because they leave behind thousands of years of human history and culture for the sake of innovation. Time-tested and honored methods and traditions have been thrown out to make way for whatever is new or, especially in the 20th century and now the 21st, what is ever stranger. This may bring an amount of freshness from the same repeated Gothic or Renaissance Revival Church we’ve seen a hundred times, but it also creates an esoteric barrier to the public. While at times static, the Western Tradition was centrally about conversations across public and private realms about central aspects of humanity. The acanthus leaves of a Corinthian capital are meant to signify a notion of death and rebirth, relevant in one way to Greeks, in another to Romans, and in a third to Christians. What do the swooping motions of Gehry’s Pritzker pavilion mean to anyone other than swoops?

I chose to study in Palermo primarily to inspect one specific space: the Palatine Chapel. On my first research trip to Siena, I was astonished at how much I had to change my research plans once I began researching. Simply put, you don’t know what you don’t know. But this time I was prepared for the fact that I couldn’t understand the Palatine Chapel without understanding the reason Palermo existed in the first place, how and why the Phonecians, Greeks, Romans and especially the Muslims and Normans conquered the city. So, I learned about the city’s origins.

Most of all what I learned what that a place could be symbolic in a way I’d never thought of before. While reading “Theology in Stone” by Richard Kieckhefer, recommended by a professor in conjunction with this project and my thesis in general, I came across the idea that a building could be symbolic simply by, well, being symbolic. There is a sense that one gets in places like the Palatine Chapel or the Cathedral of Monreale where one simply knows there are things of significance around them, even if they don’t understand them, or even know what they are. One could see a mosaic of the Nativity and notice that there are elements clearly placed that one cannot by themselves decipher, but it is precisely because of that half-knowledge that we are brought to understand the mystery of a sacred place. So, in a way, the very presence of iconography is more important than the quality thereof. We may not find an excruciatingly thorough or complex iconographic program tying everything together, but we still are made to feel the weight of the beliefs of those who came before us.

Honestly, I went to the Palatine Chapel hoping to find such a complex symbolic program, where every last detail was worked out, but it’s simply not there. Instead, I found one of the most perfect places in existence for this other type of symbolism I learned about from Kieckhefer. The myriad layers of Norman, Byzantine, and Islamic decoration give an incredible presence that on my first visit I attributed to an iconographic program. But I was in fact experiencing this new symbolism: I didn’t know what was around me, but I knew there was something. And though that something wasn’t what I’d assumed, it was just as real, and importantly it was less esoteric than what I was looking for. It’s something more accessible to the general congregation, who largely won’t spend a week looking for what figure is arranged where, but will feel their presence.

So how does this help anything; what response can be given to Wright and others? The meanings elucidated by the Chapel I studied were not in its plan configuration or in its domes: the basic parti could be found in scores of Byzantine styled works, just as its mosaics were largely typical, even if remarkable examples of the archetype. The greatest mystery of this place was that despite a lack of absolute uniqueness in these parts, their combination together is something that happens nowhere else. It is a thing inextricably tied to a place: Palermo. And this was not limited to the chapel. Visiting the Zisa Palace I stood dumbfounded and remarked that “nowhere else will you find a Norman palace with an Islamic Fountain, covered in Renaissance frescoes that actually works!” So to distill my response, I say the answer to 19th century homogeneity is not modernism’s obsession with ever stranger ways to “defy” nature, always trying to stand out, even if as a sore thumb. Rather the goal should be to find ways to tap into what is around us, on the highest and lowest levels, by simply dazzling our primitive natures, or indulging the richness of comprehensions the human mind can accomplish, to create something unique to a place, and of that place, something that could not truly exist anywhere else.

My first research trip basically opened my eyes to the world of independent research. Confusedly and excitedly I fumbled through how I was supposed to go about what I was looking for, and miraculously I found it. This trip I knew more of how to go about my goals, and learned more about how to narrow in on a specific subject and search high and low. Very importantly I learned to persist when what I was searching for turned out not to be present, and I had to trust that my first impression of some deeper meaning wasn’t an illusion, even if it wasn’t what I thought. This is incredibly important for my coming thesis (a cathedral for Dublin) because it alerts me first to the fact that first of all I have a few dozen books to read on Irish history to make a true cultural contribution, but also that there isn’t only the one preconceived way I had to getting the effect I want. Deep down, the real goal is not creating my own complex symbolism, but rather to convey to others what complex symbolism conveys to me. Palermo showed me one way of doing that.