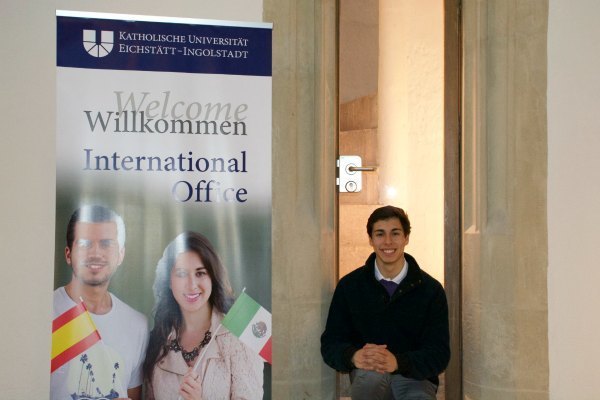 Christopher Lembo ('19), a double major in International Economics and Applied & Computational Mathematics & Statistics (ACMS), received an FYS Spring Break Travel and Research Grant to travel to Bavaria, a region in Southern Germany, to investigate ways in which areas within this state have worked on social integration and refugee resettlement. There are many factors that contribute to the struggles brought about by the process of resettling refugees, both bureaucratic and non-bureaucratic.  He sought to investigate how the struggles that refugees have to go through can be lessened. He did this by working with a university-led initiative, along with speaking to non-government organizations, labor agencies, and others involved with helping refugees integrate. Christopher recently wrote to us about his experience:

“Wir sind das Volk.”  Translated as “We are the people”, this phrase is what many people painted on their signs at an anti-refugee rally in Dresden, Germany, back in 2015. This phrase has a particular significance, due to its use in the 1980’s. People used this phrase as a means to unite the people of Germany, both northern and southern, but now it is used as a propagandized means to try and keep others out. What kind of implications does this resistance bring about on refugee integration in Germany today? What are some ways in which refugees can resettle in Germany? Is integration the answer to this ongoing feud?

When a refugee has to decide where to go in order to seek asylum, he or she really only has two options if he or she wants to find work. The choices are to either head east to Russia, where it is much more similar in terms of lifestyle and much easier to get papers, or to head west towards Europe, where it is a lot more dangerous to travel to, but much more rewarding in terms of job opportunities. Dr. Danzer, a professor in Economics at the Katholische Universität in Ingolstadt, expanded on this topic, saying that most choose to go to Europe because the wages they receive for labor such as construction, for example, are higher than what they would have received as a university graduate in Syria. However, for those who are seeking higher skilled jobs, such as continuing their practices as a doctor, most refugees are surprised at the fact that their certification is not recognized in a country like Germany. This means that a potentially highly recognized doctor must practice nursing before going back to what he or she was originally doing. Looking at this same problem from a different angle, Germany as a whole seems relaxed at the thought of finding these refugees work, since their labor market has enough room for them to join. Ingolstadt, for example, has a population of 128,000 and an area unemployment rate of about 2.2 percent, the lowest rate for that big of an area in all of Germany. The German economy, however, is slowing down, which could affect many businesses in Ingolstadt, including the German automobile manufacturer Audi, which is based in Ingolstadt. While a lot of German cities are struggling with low birth rates, Ingolstadt is thriving with the addition of able-bodied refugees, who now work in several industries in and around the town.  Now that the opportunities are available for refugees in Southern Germany, how can they help themselves in finding work?

The first step that a refugee takes in setting himself up for a job, whether low or high skilled, is gaining proficiency in the German language. Luckily there are many organizations working with refugees in order to help them in this task. A group that I got to know well is actually specializing in ways to become more efficient with helping refugees integrate. Tun.Starthilfe, or “The helping start,” originally began in 2012 as a student initiative at the KU in Eichstätt-Inglostadt that aided in refugee lodging. Since the summer of 2013, they have been able to put together a variety of classes that are catered towards teaching German to refugees. From summer seminars to intensive German language courses, these students have been putting together classes that are helping refugees with the basic tools they need. The group is currently working on a bachelor’s degree track based on a grant made for refugees that consists of a year of German studies and three years of bachelor’s coursework. This is ideal, considering a bachelor’s coursework usually takes three years to complete in Germany. Other better-known groups involved with refugee resettlement, such as Caritas, are putting together smaller classroom experiences in order to help refugees learn the language as well. Many people understand that this is one of the main barriers to entry into the German work force, so that is why so many organizations are helping this process. Refugees, who have picked up the language rather quickly have been able to lead seminars and teach German. This is just one of the many examples that opportunities like the ones created by these groups have given some of the refugees a chance for re-starting life in Europe.

The circumstances for a refugee finding labor are almost entirely dependent on where he or she is placed in Germany.  I stayed in Eichstätt, a small town outside of Ingolstadt. This town is predominantly Catholic, and it is continuously taking in refugees. The town has been very efficient at placing younger refugees in the Berufschule (vocational school), where a student can choose a path that ultimately leads to a career. The Berufschule in Eichstätt has great facilities that give students hands-on experience in various technical fields. Later on, they apply for apprenticeships where they can later end up working for that same company or business. It is similar to our internship process here. This school had a total of about 600 students, and 200 of them are refugees. In the first year, they learn German. After that, they split their time doing part time school and part time apprenticeship.  This school had its first graduating class that included refugees in the summer of 2015. According to the head of this Berufschule, four of them found full time careers, and the other 28 were sent to the local job center in order to keep looking for jobs. These numbers are attributed to their proficiency in language. All of these students are just under 18 upon graduating and they are applying for jobs that are the equivalent to jobs that college students would be aiming for during their summers here.  So, to have students that young already finding full time work is impressive. Now these numbers can be very different depending on the area that they live in.

I visited a city near Eichstätt called Nurnberg. Their refugees were placed in a ghetto that was created for refugees about 25 years ago, where persistent crime takes place. These refugees have a very difficult time finding work and have to resort to living in this government run infrastructure. Groups like Sankt Johannes are currently working on fixing this problem in small towns where ghettoization has taken place by taking over government operations, and helping these families get on their own feet. Ultimately, finding a job is difficult enough, so throwing a new language in this situation makes it even harder. The degree of difficulty for finding a job for refugees will depend on whether they get placed in a town without ghettoization like Eichstätt or in a town like Nurnberg. It is groups like these that truly make the difference in helping them find a new start.

Grassroots movements in Southern Germany really make the difference in trying to find a solution to solving the problem with current integration techniques. Tun.Starthilfe, Sankt Johannes, Bellevue di Monaco, The Bavarian Refugee Council, and many other movements not directly affiliated with the government are leading the way in helping refugees integrate and become part of the society. These groups truly evoke the spirit of “Wir sind das Volk,” and I believe that my talks with members from each of those groups shows me just how far Germany has already come with integrating refugees. Dr. Martin Groos, the director of international affairs, put it well, saying, “Integration is not a question of statistics, but a question of what there is to offer.” This statement correctly sums up my week long experiences there learning about all of the different methods that are currently in place to help refugees integrate. Germany is offering up many resources, and if it were not for “das Volk,” Germany would be in an entirely different playing field with this situation.

On a more personal note, I am going to use my findings and research that I have found in Germany and continue my pursuit in finding ways that we as Americans can help out in this situation, whether it be with those refugees or other immigrants currently facing struggles here in America. Coming from Arizona, I saw the struggles that immigrants faced daily, and so applying the knowledge and methods used in Germany, I will be better able to come up with solutions of my own with immigration-related problems in the future.