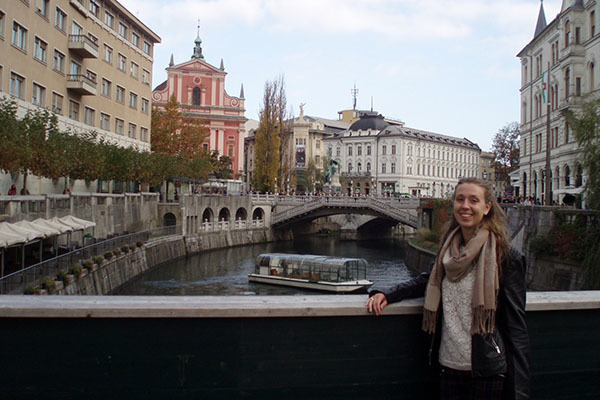 Thanks to a Senior Travel and Research Grant provided by the Nanovic Institute of European Studies, I was provided with the opportunity to conduct first-hand research in Slovenia for my European Studies capstone essay.  The subject of my project is the role of Slovenia in the European Union. As a small country with former communist roots, Slovenia is an interesting case to study as the EU struggles through an economic crisis.  Slovenia is certainly feeling the ramifications from this crisis and is also muddling through its own corruption scandals in the government.  The status of Slovenia in the EU is therefore a pertinent topic, especially if Slovenia can serve as a model for new countries that are joining the EU, like Croatia.  By traveling to Slovenia over fall break, I was able to access archives, libraries, and documents that I would not have had the opportunity to look at in the United States.

During my time in Slovenia, I was able to visit four different libraries or centers.  The first library that I visited was in the city of Maribor.  The University of Maribor is well-known in Slovenia for its economic faculty, so I took a day to peruse the shelves and pick up books that I could only find in Slovenia.  Most of the books that I found were published by universities in Slovenia, and copies of them could only be found in Slovenia.  These were very useful in judging what Slovene experts themselves thought Slovenia and the EU.  After finishing up the research in Maribor, I caught a train to Ljubljana, the capital of Slovenia, where I was planning on conducting the bulk of my research.  In Ljubljana I visited the University of Ljubljana’s Economics Library, a European Documentation Center, and the National Library.  The Economics Library at the university and the National Library proved to have much of the same material as the library in Maribor, but the European Documentation Center provided me with interesting information about the hoops that Slovenia had to jump through to join the EU.

The biggest reform that Slovenia had to conduct to get into the EU was of their banking system.  For such a small country, Slovenia had too many banks, and policies put in place to encourage bank mergers backfired.  Slovenia was therefore forced to revise their banking sector.  However, the documents showed that Slovenia was actually in a good place economically to join the EU, with most of their economic indicators performing just as well as some of the smaller countries already in the EU, such as Greece and Portugal.  (Interestingly, all three of these countries today are in trouble economically.)

One of the main questions that I came to Slovenia hoping to answer was whether or not EU membership was a benefit or a burden for Slovenia.  As it is with most research questions, I left Slovenia with answers to argue both sides. Professors and books at the universities both seemed to agree that after Slovenia left Yugoslavia in 1991, Slovenia needed the EU market to jumpstart economic growth.  Exports are very important to Slovenia, since it is a small country of only two million, and after 1991 markets east of the border were lost.  Therefore, the western markets were most important for Slovenia’s economy, and EU membership was the logical step to taking advantage of these markets.  However, Slovenia also joined the monetary union, and with this membership, there was a price.  Slovenia lost control over its fiscal policy.  As evidenced by Greece and Portugal, having control over fiscal matters could have softened the blow of the economic crisis in these countries, and Slovenia would have been no exception.  Therefore, there were unquestionably pros and cons to Slovenia’s accession to the EU.

With my trip wrapping up and the libraries closed for the weekend, I took advantage of my last day in Slovenia to participate in the Ljubljana Marathon.  I’ve always believed that running races are amazing events that bring together individuals from all walks of life, and I certainly felt this while running the 42 kilometer race.  I was cheered on in Slovenian, Croatian, German, Italian, English, and languages that I could not even recognize.  It was the perfect way to end the trip, and I felt so blessed when I crossed the finish line with the view of the Ljubljana Castle right in front of me.

In conclusion, the Nanovic Institute’s grant gave me the opportunity to gather more material for my European Studies capstone essay.  As much information on Slovenia is not readily available in the US, this trip was invaluable to the success of my capstone project and for future projects.  The experiences that I gained from this trip also made my application for a Fulbright fellowship in Slovenia stronger.  Therefore, I am incredibly grateful to the Nanovic Institute and its donors for the opportunity to contribute to my educational and career advancement.