We're very proud of Christina Serena!  Her research on Saint Pope John Paul II, made possible by a Break Travel and Research Grant for Sophomores and Juniors, was published by the Homiletic and Pastoral Review.  You may read the full text of her article at http://www.hprweb.com/2014/05/poland-remembers-a-firsthand-look-at-blessed-john-paul-iis-impact-on-the-people-of-his-homeland/.  For a more experiential account of research trip, including a description of some of the vocational and spiritual benefits of her travels, read the grant report that she sent to us.  When she wrote this report, she had no idea that she would published, as well as posted and widely liked and shared on Facebook.  What could happen to you as a result of your Nanovic grant? 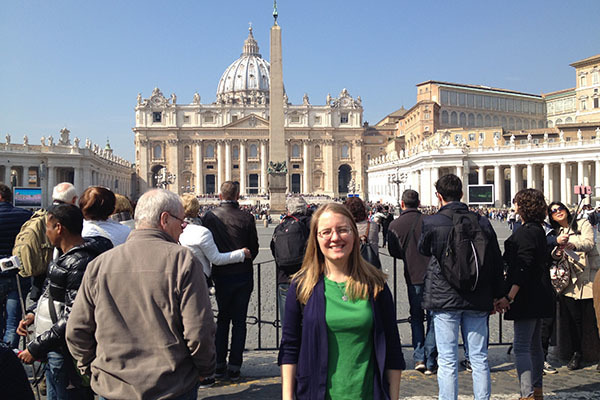 I would like to thank the Nanovic Institute for European Studies for the opportunity to travel to Poland during fall break. I was nervous beforehand because I had never traveled alone in Europe before and was unsure about how many people would be willing to meet with me. Yet, thanks to the help of Professor Adrian Reimers, I was able to interview 23 Poles! Going into the week I thought that I would hear a lot of the same information over and over again. However, I was pleasantly surprised by the variety of the interviews. Common themes were John Paul II’s impact on the Solidarity Movement as well as their personal feelings towards having a pope that was one of their own for over twenty years. However, these interviews also revealed the unique features of the way each person approached John Paul II because of each individual’s particular background and interests. I was able to see Pope John Paul II’s impact on Poland from varying perspectives such as that of a sociologist, theologian, new feminist, cardinal, priest, sister, youth, senior citizen, practicing Catholic, cultural Catholic, an atheist and even two close friends of John Paul II. Most of my interviews were formal and videotaped. However, I also found time to interview people on trains and buses and while at churches, universities, and touring Warsaw, Krakow, and Lublin. Through all these interactions, I learned way more than I ever thought possible during a research trip of only nine days. I now have so much to say about Pope John Paul II and Poland that it would be a shame not to turn this research project into an additional senior thesis next year.

In addition to the research aspect, I was surprised by how many lasting friendships I made. It was amazing to me how close I became to my guides throughout the week. I plan to return for a visit when I am studying in Rome next semester so that I can see them again. The last aspect that was an unexpected treat for me, as a future Dominican, is that one of Professor Reimer’s friends connected me with the Dominicans in Krakow. Their community was founded a few years after St. Dominic’s death. So, it was wonderful opportunity for me to walk through a priory nearly as old as the Order itself. I was able to interview three Dominicans, and one of them will be a professor at the university in Rome I am studying at next semester.

I am thankful for the opportunity to conduct this research project because of its impact on me educationally, culturally, and spiritually as well as for the friends I have made and the experience of seeing Poland. Going to Poland was one of the best choices I have made while at Notre Dame. Although the pre-trip research and organization was time consuming and I am still sorting through the results of the many hours of interviews, it was worth it. Thank you once again for this incredible opportunity!