Chris Lattimer ('16) is an Architecture major who received a Summer Travel and Research Grant  to travel to Lithuania, Latvia, and Estonia to conduct research. His research led him to critique modern architectural methods and to study more traditional ones which represent a sustainable and harmonious relationship with nature and reflect the context in which buildings located. Chris recently wrote to us about his experience and his research:

Learning to live more sustainably is a critical issue faced by contemporary society. This challenge of sustainability has been curtailed to “a fight against climate change.” Politicians and activists look to fight this by calling for measures such as reducing CO2 emissions, recycling, and taking advantage of renewable energy sources. Over the course of my studies, I have been introduced to these discussions, as well as finding the “greenest” methods of building, but I believe that this mechanistic and scientific approach to nature is leading us further astray. Over the past year, I have been inspired by the works of Christopher Alexander and HRH The Prince of Wales. In their writings, they each discuss contemporary society’s crisis of the perception of the natural world. Rather than providing singular solutions to the attenuated problem of “climate change,” Christopher Alexander and Prince Charles instead look at the bigger picture to understand the overarching issue by challenging Western society’s way of life and examining how this represents our confused philosophy of humanity’s relationship with nature.
Our contemporary way of life controlled by economic and scientific progress represents Western society’s “modern” view of the world, which makes a distinct separation from what we would term as a “traditional” philosophy of life, which is commonly associated with the lowtechnology way of living of the past. As architecture is a reflection of the values and activities of a society, these two views of the world can be studied through the built environments of today and of the past. During my 4-week independent study in the Baltic States, I explored this distinction between our “modern” lifestyle and a past “traditional” lifestyle. Rather than understanding one as “modern and civilized” and the other as “of the past and barbaric,” I looked at how each philosophy understood humanity’s relationship with nature. I explored these ideas through deliberation and writing, studying traditional and modern architecture, and having conversations with locals. 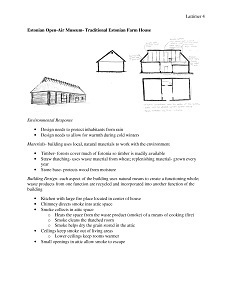 I first expanded upon the two separate philosophies of the world and discussed how these are represented in society. Much of this research was derived from past readings and reflection. Our modern view of the world tends to over-emphasize a linear conception of time, which is explained by how a human perceives the world. In this view, everything has a beginning and an end, or a birth and death. Contemporary society is also very much concerned with scientific truths and breaking things down into parts to detail exactly how something works. In contrast, what is termed as a “traditional” philosophy of the world understands nature and time as cyclical. It understands humans as a part of nature, which works in a series of life, death, and rebirth cycles. We must work with nature to support it in order for it to support us. Stemming from this belief, traditional societies are more concerned with virtues and the collective good, rather than the scientific truth of things.
Today, we see our modern ideals represented in society through our reliance on science and technology and our mechanistic way of accomplishing tasks. This is opposed to a traditional way of working, which is organic and responsive to the context. One basic example is the way we farm today versus a traditional way of farming. Today, monoculture farming is common in Western society. The idea is to essentially gai n as much product from nature as economically efficiently as possible. This involves a mechanistic understanding of the crop or animal and scientifically modifying it so that it produces the greatest amount of usable product. Not only does this involve the introduction of unnatural products, but it also only looks to gain from nature without contributing back to it. A traditional way of farming is much more sustainable. Today this is termed as “organic farming,” but in reality, this is how farming has been done for thousands of years. Traditionally, farming has involved working with the cycles of nature to produce crops. The product benefits humanity, but, by working with what nature provides, the farmer is contributing back to nature, rather than only reaping the benefits from it. This allows nature to continue functioning in a way that will naturally benefit us.
Finally, I studied how these ideas are represented in architecture. The Baltic States boast a great variety of vernacular architecture. To put it simply, vernacular architecture is usually characterized as buildings that were not designed by architects. They are buildings that were built by the owners of the property, and they were designed to promote an efficient use of the property based on the context of the site, the environment, and the use of the building. They usually appear as simpler buildings with less ornate decoration. As architecture represents the beliefs, values, and activities of a society, I could investigate how these buildings contributed to a “traditional” lifestyle and compare this to  contemporary buildings and how they represent a “modern” lifestyle. I have a few examples attached of studies of buildings that I completed, which explain this part of the study further. From these exercises, I gained insight about how
these vernacular buildings worked with the grain of nature to improve the building’s performance, make the building more comfortable, and make it most efficient given its use. For example, the use of natural, local materials contributes to the durability of a building because, as these materials are formed by nature, they naturally work well in the given environment.
This vernacular way of building represents a harmonious relationship with nature. Architectural features and techniques are incorporated to respond to the given environment. For example, the roof pitch and material used depends on the amount of rain and snowfall in a given area. Or, the thickness and material of the wall is based upon the necessary protection against climatic factors. These techniques which use natural means to create a comfortable shelter allow the building to beneficially interact with nature. This relationship allows nature to work with the building and support it.
Most contemporary structures are built based on scientific measures. We design artificial materials that will combat any problem presented by nature. These materials include polystyrene insulation or plastic water barriers. The goal of contemporary building is still to create a safe and comfortable shelter, but the philosophy is different from a traditional method. Modern buildings create a separate environment from nature. We use unnatural materials and HVAC systems to create an ideal climate, but we cut off the building’s relationship with nature. Therefore, the building will not work with nature, and nature will not work with the building. This contemporary way of building represents modernity’s broken relationship with nature. Today, nature is seen as separate from humanity. As discussed in the farming example, we only look to reap its benefits, but not to work cooperatively with it. 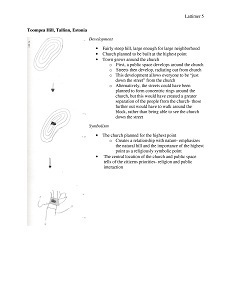 This study not only allowed me to explore how traditional architecture represents a sustainable and harmonious relationship with nature, but I also came to better understand architecture as a reflection of the values, culture, and traditions of a society, rather than seeing it merely as “decoration” or “style.” The modern interpretation of buildings having a “style” according to its materials and ornament is an unfortunate misunderstanding of a building. Traditionally, the materials, construction practices, ornamentation, and layout of a building represented the values, culture, and traditions of a society, as well as how the building interacts with the people, the built environment, and the natural environment. Our modern conception of applying a “style” to a building reflects our disconnection from nature. Every aspect of the building, from the structure to the HVAC systems, is scientifically designed to work in isolation, rather than in conjunction with nature. The “style” is then simply applied to evoke emotion from the users of the building.
Being able to travel on behalf of The Nanovic Institute for European Studies was an invaluable experience. Over the past year, I have read many books on these subjects, but by traveling I was able to explore and expand upon these ideas myself. The Baltic States of Lithuania, Latvia, and Estonia were an excellent location for this study, as the countries boast a rich history of simple vernacular architecture. Also, a fair amount of people still live traditionally with the landscape, as this area is less developed according to Western standards. This study has certainly guided me towards ideas that I would like to focus on in my last year at Notre Dame and continue to research post-graduation.
Bibliography
Alexander, Christopher. The Phenomenon of Life. The Nature of Order: An Essay on the Art of Building and the Nature of the Universe. Berkeley, CA: Center for Environmental Structure, 2002. Print.
HRH The Prince of Wales. "Islam and the Environment." Sheldonian Theatre, Oxford. 9 June 2010. The Prince of Wales and The Duchess of Cornwall. Web. 22 Feb. 2015.
HRH The Prince of Wales, Charles, Tony Juniper, and Ian Skelly. Harmony: A New Way of Looking at Our World. New York: Harpercollins, 2010. Print.