When Caleb Wenzel, a graduate student in Sacred Music, received a Graduate Travel and Research Grant to conduct research in Germany, he expected a routine examination of manuscripts for a critical edition.  Instead, he ventured into a series of archival discoveries that took him to a church library in a small German town to find the last complete copy of a short forgotten masterwork. Caleb recently wrote to us about his experience:

Sebastian Knüpfer is not a commonly known name among choral conductors or music scholars, despite having served as the music director at the famed Thomaskirche in Leipzig, Germany for nearly 20 years.  Overshadowed by the music of his famous successor, J. S. Bach, Knüpfer’s prolific contribution to Lutheran sacred music could simply become archival holdings of various libraries unless his works are championed again and given their rightful attention.  In his lifetime, Knüpfer was well-regarded as a master composer with particular strengths in counterpoint and instrumentation.  His tenure at the Thomaskirche is generally considered the restoration point of the musical infrastructure decimated by the Thirty Years War.  My intention is to revive performance of his works through completion of a critical edition of the extant Latin Psalm concerti.

Some small efforts have been undertaken in the past to revive this repertory, but none have the scope which I have been able to pursue.  Previously, Knüpfer’s works have been bundled together with works of other composers from the period and region as a musical example of a time and place.  Additionally, much of the work done on Knüpfer’s music in the past 50 years has been done by American scholars who had extremely limited access to the archives of the former East Germany, where nearly all of the manuscript sources are preserved.  Today, a greater ease of international travel and archival access allows for direct access to the sources which were unavailable to previous scholars.  Additionally, I am one member of a team creating a critical complete works of Knüpfer’s extant works.  This is the first time in history that Knüpfer will receive such singular attention.  My methodology also departs from previous methods.  Rather than taking a large sampling of various works, I have focused work on a particular genre: concerted Latin Psalm settings.  This allows me to consider carefully Knüpfer’s process in one aspect of his creativity, rather than generalize his corpus of works into a series of broad observations. 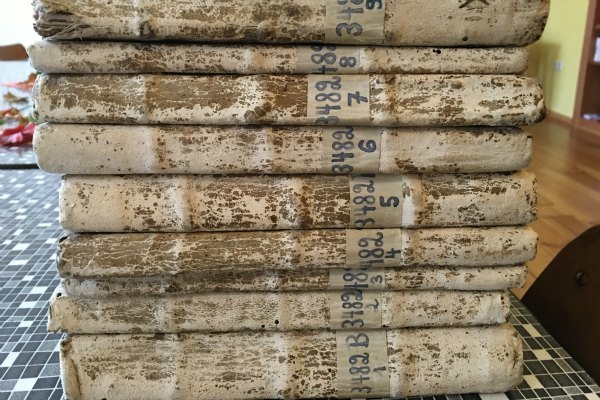 My tour of manuscript study first took me to the Bodleian Library of Oxford University.  I was able to obtain microfilm copies from the Bodleian before my trip, but the microfilm had been made with old technology and was extremely difficult to read other than the basic skeleton of notes and rhythm.  Working with the sources in person was a revelation.  It was immediately apparent why these sources have not yet been digitally preserved to modern standards; after the individual folios had been photographed for microfilm, they were bound into a hardcover collection.  Examining the sources revealed two major points completely impossible to discern from the microfilm.  First, what appeared to be strikeouts in several places was actually a smearing of the staff, probably because the scribe slipped, turning his pen to the broad side and accidentally striking through what he had written.  I was also able to trace corrections made after the initial copying by tracing the use of fine and extra fine tip writing.  In my 5 days in Oxford, I was able to transcribe the two works in their care, carefully cataloging changes in scribal instrument.  I was also able to photo document the manuscripts for my own proof-reading perusal.

After my time in Oxford, I left for the Sächsische Landesbibliothek – Staats und Universitätsbibliothek (SLUB) in Dresden.  Working with the music manuscript curator, I learned that they held a source for one of these Latin Psalm settings, Quemadmodum desiderat, which was not cataloged in RISM – the international database of music manuscripts.  The source, a collection of choir part books from the city church of Löbau, was too badly damaged for me to access personally, but I was allowed access to their microfilm copy.  I quickly realized that this Löbau source was significantly different from the Düben source of this piece I had already consulted.  The Löbau source greatly expanded on the Düben version, expanding the string parts and extending the piece to include coda.  Unfortunately, the Löbau source was so badly damaged that some instrument parts were missing or incomplete.  Peter Wollny’s work on this Löbau source revealed that a similar collection of works existed in the archives of the Nickolaikirche in Luckau, citing this very piece as common to both collections. What luck!  I immediately wrote to the music director of the Nickolaikirche about visiting the archive and adjusted my itinerary accordingly.  Indeed, they held in their collection a manuscript copy of this expanded version of Knüpfer’s work – a complete copy!  Not only does the Nickolaikirche hold the only known copy of this expanded version, they also have yet a third version of this piece for the same expansion of string parts, but significantly altered string writing and text variants in the vocal part.  Unfortunately, they are missing some of these part-books, so this third version is incomplete.  The RISM catalog had wrongly cataloged both of these collections, citing these particular works as “anonymous,” preventing earlier discovery. 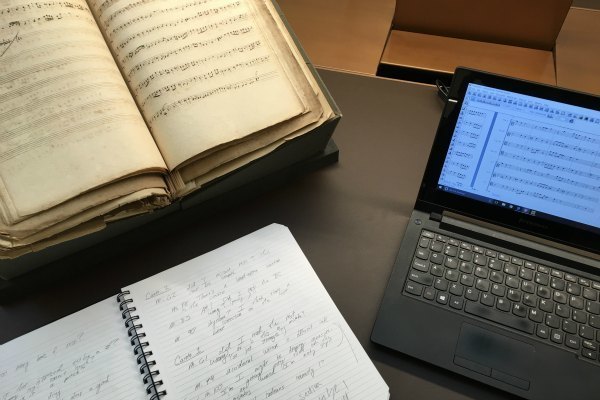 This was a significant find.  Not only does it reveal that Knüpfer reworked one piece into at least three versions; it also revealed an extent to which his music circulated without clear annotation of authorship.  His name does not appear in either Luckau source.  In fact, most pieces in these part books were copied with no annotation of authorship – even though they contained several famous works of Heinhrich Schütz and Johann Kuhnau.  Without Peter Wollny’s work on both collections, which noted the piece common to each collection, I would not have been put on the trail of these manuscript sources.  As such, I have been able to complete editions of two of the three versions of this piece: the smaller Düben version as well as the expanded Luckau/Löobau version.  The alternate expanded version from the Luckau source remains unfinished, but now I have begun a new review of 17th-century manuscript holdings of the region.  Perhaps I will not find a completed third version in manuscript and will have to complete the work myself.  In any case, my critical edition has greater breadth now because of this discovery hidden in an isolated strand of scholarly inquiry and incomplete archival cataloging.

For a performing musician, it is rare to engage in the musicological process to this extent.  As a conductor who performs a great deal of 17th-century music, I rely heavily on the work of diligent music scholars.  For this project, I am both working with some of the top scholars of 17th-century music as well as engaging in the scholarship first-hand.  Never would I have suspected that what was expected to be a rather routine examination of manuscripts for a critical report would have developed into an archival treasure hunt.  I have a newfound gratitude for music archivists, to be sure.  But this has also given me pause as a performing musician.  When I present this body of works in a concert for the American Bach Society in April, the performance of Quemadmodum desiderat will be more than a fantastic story about some scholar traveling to a small town in Germany to find the last complete copy of a nearly forgotten master composer; it will be my story about finding a masterwork in the least expected of places.