Ever wonder what a bit of funding can do for a graduate student conducting research in Europe? Bry Martin, a doctoral candidate in the History department, knows exactly what it can do! Here he presents to us a tale of two research trips: one self-funded, and another funded by a Graduate Travel and Research Grant from the Nanovic Institute. The difference is striking! 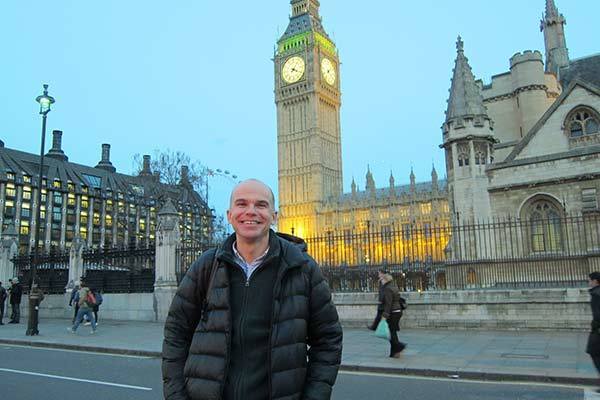 I returned again to Dorset, and the manorial estate of the family I have spent the last year-and-a-half thinking and reading about, but this time as a fully funded researcher, thanks in large part to the Nanovic Institute.  The financial assistance makes all the difference. Let me describe why that is. The year before I had eked out a six-month research trip to the United Kingdom on my stipend and the sale of my Jeep Wrangler, a snarling chewer of Southern California asphalt reduced to a shivering, whining ice box by the cruel Northwest Indiana winters.  All that had funded, first of all, a few months of photographing manuscripts in archives in London. Researching in London, a city by, of and for archives, is like having history read to you by a court page while you recline on your ottoman with archivists waving palm fronds and dropping freshly-plucked grapes in your mouth. But the trip had also entailed three months in the country and the smaller cities of England, and things get a little more rugged for historians out there. Living for a month-and-a-half in Downton, Wiltshire (a charming village, but a sinkhole of disappointment for American costume drama fans who visit only to find there's no Abbey there after all), I perched myself an even distance between four major archival deposits, and was just able to swing the public transportation on my meager resources. Accessing any of the archives meant five hours' travel a day, by uncertain buses traveling congested two-lane roads, perceiving the actual land of England unfold out of dimly tinted windows on the same straight path. The job got done, but it was slow going, and the contribution to my historical knowledge of my time period almost wholly happened in the archives.

This year, with Nanovic's research grant in hand, research sped up and branched outside of the walls of the archives when I left London. For one thing, I was no longer a researcher with a bus pass; I was a researcher with a zippy little Vauxhall, terrorizing the locals by going the wrong way on roundabouts. The five hour commute became an hour, and on weekends the compact car meant I could ride around the proximity of the Dorset estate of the family, dropping into the churches they had maintained, charting the landscape and distances between the parcels of land that came in and out of their possession over the centuries.  Driven on solely and exclusively by the thirst for knowledge, I frequented the local village pubs and teahouses. People opened up. An employee of a local museum confessed she had a picture of Robert E. Lee on her mantle, because she blamed the American Civil War for the depression in the cotton-hungry late nineteenth-century English textile industry. It helped me reconcile my own research subject's sympathies with the South despite his abiding hatred of slavery. An elderly man sweeping the entrance of a church in a small village turned out to be a retired archeologist, familiar with my advisor's work, and who brought me up to date on the land swaps and purchases in the area by the two great landed families residing there. I found out that the proprietor of a chicken farm where I was living was actually the tenant of a family of no small importance to my dissertation. I would have made none of these encounters if I had been, as I would have been, bottled up in five-hour commutes.

Even while staying in London, the Nanovic grant made the research trip better. Having realized that I had probably overbooked my time in London given how much I had already found in their archives the previous summer, I was able to use the Nanovic money for train rides to record offices in Kent, Hertfordshire, and West Sussex, counties close enough to London, but with inconvenient hours by bus. The Record Offices contain invaluable, and often less-used materials, and they often get neglected because they are out of the way. But what I found in them gave me a much better window into the lives of some of the less well-known members of the family I'm researching.In all, the Nanovic grant made the difference between a true research trip and a simple document retrieval expedition. I was free to think about and ask more questions about England, and to follow up on my curiosity in a way that I couldn't have without the financial support with which the Nanovic Institute provided me. And as you might have gathered, there was a lot more fun mixed in with the business as well. I am grateful for the Nanovic Institute's assistance. A better dissertation drawing from a greater depth of experience will follow because of it.