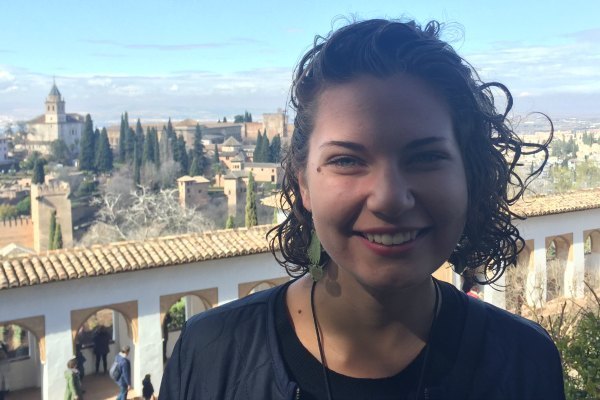 Walking the streets of Southern Spain in the heart of the Semana Santa, or Holy Week, the task of studying migrants’ economic and social positioning within Spanish society seemed to take on heightened meaning and contrast for Brittany Ebeling ('18), a double-major in International Economics and Peace Studies. Brittany received a Break Travel and Research Grant for Sophomores and Juniors to explore the multifaceted realities of migrants’ lives, often restricted by socioeconomic and political barriers to success. She did so in the midst of communal celebration, and then wrote to us about her experience:

The inquiry of my research centers on the socioeconomic and political realities of migrants living in the “soft underbelly” of Spain. As a former ‘exporter’ of migrants out of the European Union, Spain has since evolved into a multifaceted space shaped by the effects of bilateral agreements with Sub-Saharan African nations. These migration agreements, however effective in achieving their aims of legalizing the now-frequent clandestine movements of people from West and North African coastlines, have changed the human geographic landscape and demographics of Spain altogether. Building upon my research in the summer of 2015 in Ecuador (through a Kellogg Institute Experiencing the World Fellowship), I wished to explore the regionally-distinct migrant labor markets developed under the myriad of socioeconomic and political hardships. For the purposes of this project, I traveled to the south of Spain and met with various NGO representatives and Spanish academics whose research focus centers on this subject. While my academic interests lie in the study of migration and migrants’ rights, my experiences in Spain also served as a mirror upon my current study abroad semester in Dakar, Senegal. Dakar is the site of many migrants’ departure to European countries such as Spain, and I wished to inform my understanding of these migrants’ experiences with knowledge of their final destinations.

My research project diverges from previous approaches to this topic because of its emphasis on newly-arrived migrants to Spain, as well as its segmentation of the migrant worker population into regional labor market adjustments and categorizations. While outlining the objectives of my research, I read various publications discussing formal labor market participation by migrants (presumably because this subject is easier to track officially and analyze over historic time periods). Additionally, I read a great deal about migrant identity and barriers to socioeconomic integration in Spain’s urban centers, notably Barcelona and Madrid. My attempts to research this subject from the perspective of informal economy participants in the south of Spain offered a novel perspective about a meaningful research question.

As my current study abroad program’s spring break schedule fell a few weeks after Notre Dame’s break, I was fortunate enough to explore my research question in the midst of the Semana Santa, or Holy Week, leading up to Easter day. In each leg of my visit, Holy Week processions contextualized the community cohesion and social valuation of religion that greets migrants, adding to difficulty to socially integrate into Spanish society. Of the various organizations and indivuals I spoke with, the general sentiment was that the integration of migrants and refugees into Spanish society was primarily aided by economic integration methods and educational support systems (particularly if the migrants do not speak Spanish or have children who are still learning the language). As contrasted to my research in Ecuador, a country accustomed to refugee and migrant waves of movement from Colombia and other Latin American countries, the networks of communication between NGOs in the south of Spain appear much looser, with less data- and information-sharing between organizations. This “loose network” seemed to become particularly problematic when differentiating between the socioeconomic situations of migrants upon entry, notably the differences between migrants from Latin America and migrants from Sub-Saharan Africa. Offering blanket solutions such as aid-based or temporary economic supports matches the needs of only a portion of this migrant population, and also does not cover the needs of migrants across all regions and cities.

Since I hope to construct my senior thesis upon the theme of West African migration to Europe (and the socio-economic implications of this change in environment), I considered the “Regional Holistic Model” (RHOMOLO) used by economists to contextualize my qualitative interviews. This model emphasizes that wages and unemployment are important channels of labor market adjustment. I observed evidence of this relationship during my week of study and research, as I observed differences in informal economy participation (such as migrants selling goods on the street) and more formal, private sector participation (though often not by Sub-Saharan migrants, but migrants from elsewhere to the south of Spain). These observations and conversations also helped me build upon what I have learned while studying development economics and bilateral work agreements while in Senegal. While studying development economics, I have observed co-operative farms funded by the Senegalese government in an attempt to minimize migration out of the country into places like Spain. The disparity in conditions for agricultural workers in the south of Spain as opposed to the preferable conditions for workers who participate in co-operatives such as this one begs the question, “What information disparities remain for migrants who believe that their best option is to travel to Spain, and are economics the biggest drivers of such diaspora movements?” That is to say, if European and Sub-Saharan governments placed equal effort into developing domestic employment solutions as they have into temporary (and sometimes inefficient) bilateral work agreements, would the effect on economic socioeconomic success and decreased political backlash be greater?

The findings of my research have enriched my understanding of the “migrant experience” through qualitative interview reflections as well as observational study within the south of Spain. In my opinion, my research findings have challenged certain assumptions about the uniform socioeconomic identity of non-EU citizen migrants to Spain, while also informing the complexity of their decision to participate in informal economies. It has highlighted some of the risks, trade-offs, and potential personal identity struggles while aiming to integrate. Additionally, this research has informed and challenged my existing concept of the conversation about what strategies are best-suited to address the needs of migrants. Frequently, this conversation halts at a political solution (or deadlock) but fails to address the identity-based, socio-economic, and integration needs of migrants from backgrounds so different from the environment that receives them. I feel prompted to continue to explore the implications of these disparities while following state-led and NGO attempts to bridge the divide.

As an undergraduate student at Notre Dame, my academic, research, and professional experiences have centered on the study of migration and refugee rights in the context of post-colonialism. Deconstructing the economics and philosophy of internal displacement and international migration has informed my desire to pursue graduate studies focused on the same theme. In many ways, I view this research experience as a variation on and continuation of my summer research experiences in Ecuador. Furthermore, this research experience in Spain will inform my upcoming summer internship at the International Organization for Migration headquarters in Geneva, Switzerland. Conducting undergraduate research of this variety has affirmed my desire to continue developing these questions about the economic and political status of migrants through the pursuit of graduate studies and a professional trajectory within this field. I am overwhelmingly grateful to the Nanovic Institute and its supporters for their generous support of undergraduate research experiences such as this one. As I look toward the final year of my undergraduate education, I anticipate a career and ongoing research interest that supports and sustains migrants’ socioeconomic integration opportunities.