Annie Rhodes is a Senior majoring in French and Francophone Studies and Sociology.  The Nanovic Institute awarded Annie a Senior Travel and Research Grant to travel to Paris over fall break to conduct archival research.  Annie recently wrote about her experience: 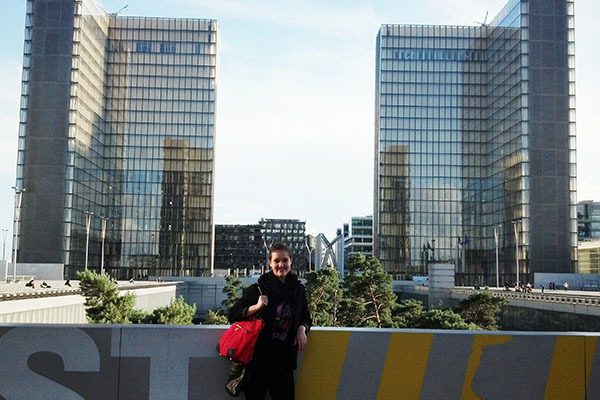 I arrived in Paris on October 19th, a Saturday afternoon.  The Bibliotheque Nationale de France (BNF or National Library of France) was closed, so after dropping off my things at the apartment I had rented in the fifth arrondissement, I decided to explore my environs and orient myself in the neighborhood.  The location was perfect.  Only a 10-minute walk from the bustling area of Rue Muffetard, and only about a 20-minute walk from the Latin Quarter and universities such as the Ecole Normale Superieur and the Sorbonne, I was in the heart of the student’s Paris.  There were inexpensive places to eat, great bookstores around every corner, and students congregating in parks and outside independent movie houses—all just a few steps from my apartment!  Before when I’d stayed in Paris, it was always in a hotel or hostel near tourist attractions, and I’d always been surrounded by foreigners.  So I was very excited: appropriately, this time in Paris, when the point of my trip was academic research, I would be experiencing something of the student’s life in Paris rather than that of a tourist.

The next morning, after stopping to have a coffee and croissant at a typical Parisian corner café, I set out for the BNF.  I had purposefully found an apartment within walking distance from the library, but I had never been there and didn’t know exactly where it was. (It is in the thirteenth arrondissement, east of the Ile St. Louis, in a modern section of Paris and farther east than I had ever had any reason to go in the past.)  So I headed off, map in hand (looking very much like a tourist, I might add), for the place I’d spend much of the next week, not really knowing what awaited me.  It turned out to be only about a 12-minute walk, and a pretty direct shot from my apartment.

I was not prepared for this library.  I had heard that the building itself was very modern but I had never seen a picture of it and had no idea how imposing it would be.  Neither had I considered the psychological effect architecture can have on someone entering a building.  The building is ENORMOUS, with four tall towers framing a huge, raised outside courtyard, underneath which are the reading rooms of the library.  In order to enter the building you first have to climb steep stairs that run continuously around the whole complex and then descend again (by way of a very long, sloped moving walkway) into the entrance hall.  After going through an interview process, having your photo taken, and paying for your “chercheur” (researcher) photo ID card, you are allowed to descend yet further into to the depths of the building to enter the “salles” (reading rooms), from which you are able to access the multitude of resources of the BNF.  The effect of the imposing nature of the building as well as the required ascent and subsequent descent was a feeling of nervousness and inadequateness that subsided into deep humility and respect in the presence of this multitude of academic sources.

I admit, it took the first couple of days just to get a hang of using the library—finding the correct salle for the kind of sources I wanted to consult, then using the electronic database to find the location of the source I wanted, then finding out at which “station” I had to be in order to consult that type of text (in the salle in which I ended up spending most my time, I had to be at a certain kind of station to view paper documents, another one to view audio-visual sources, and yet another to access Gallica, their electronic reserve that holds thousands of scanned documents, but which can only be accessed within the walls of the library), and then actually ordering the source I wanted to use and waiting for it to be brought from one of the four towers to me at my station.  Even as complicated as the process was at times, I fell in love with it.  In the week, I became addicted to the library and the research process and truly looked forward to each afternoon I spent with my sources.

My goal was to trace the musical and lyrical evolution of the popular French nursery rhyme song “La Mere Michel” and the works inspired by it.  The basic story of the song, that a woman, la mère Michel, loses her cat, is just about the only constant present in all versions of the song and in all literary works inspired by the song.  After that, there is no consensus to exactly what happened: in some versions a certain Père Lustucru hangs the cat, in others he sells it as rabbit in his butchery, and in still others, he gives it back.  In some versions, Père Lustucru is completely absent.  The variations go on and on, some peaceful and others quite violent.  I originally believed that the song was the original source of the story.  During the course of my research, however—which was based entirely on primary sources, as virtually no criticism or analysis has been previously conducted on the topic—I found that the source of the story was actually a poem first performed as a play by the Guignol Children’s Theatre at the end of the 18th century.  The poem was then set to a somber tune in a minor key, a melody no longer associated with the rhyme.  In the 1820s, the song was shortened and popularized with a new melody: a joyous-sounding 17th century victory march written in a major key.  This is the tune the French populace knows today as the melody of “La Mere Michel."  Since the 1820s, the song has undergone other transformations, primarily lyrical changes that render the song less violent and disturbing than the original rhyme.  The works inspired by the song seem for the most part to follow the same general pattern: with each successive work, the story told is less violent and thus more acceptable according to the norms of what is appropriate for children in the modern world.  My analysis is based on about 15 audio recordings of different versions of the song, various scores and sheet music for musical renditions, two children’s books, a novel, a sort of epic poem, a burlesque play, an operette, several short stories, and a video of a puppet show, all of which were consulted at the BNF.

In the end, I produced a paper which will serve as my final paper for my class "Art of Interpretation: Paris," taught by Professor Julia Douthwaite.  But this was not the only nor necessarily the most valuable result of my Nanovic grant: my first experience in a world-famous, monumental library taught me practically how to navigate a library to conduct academic research, and also inspired in me great motivation and excitement at the prospect of library research.  This experience very much reinforced my conviction that the pursuit of a PhD is in my near future and that my life will very much revolve around academic research.  I cannot adequately express my gratitude for this opportunity afforded to me by the Nanovic Institute.