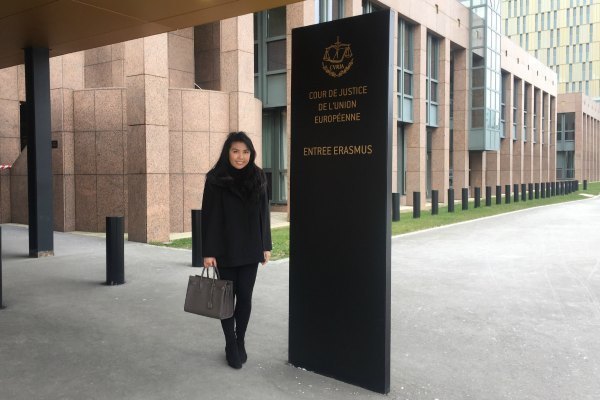 The European Court of Justice (ECJ), since its founding, has been entrusted with the heady task of integrating the national legal systems of all of the European Union member states and demoting their national courts to a junior court role. In this way, the ECJ is able to uniformly and consistently apply EU Law within its hierarchical legal structure. In the pursuit of this ambitious endeavor, it is necessary to examine the extent to which the ECJ has played a role in the process of European integration, and then subsequently evaluate whether or not these processes are democratic in nature. Alivia Zhou ('17), a double major in Finance and Political Science, received a Break Travel and Research Grant for Sophomores and Juniors to travel to Luxembourg to address the following: What are the core reasons why the ECJ has been deemed undemocratic, and how has this purported democratic deficit affected its ability to effectively and prudently advance the economic, political and social integration of the EU member states? Alivia recently wrote to us about her experience:

Embarking upon this research effort, I had known that there was plentiful existing research regarding various aspects of the European Court of Justice. However, through my studies, I became interested in one particular facet of the ECJ that seemingly had not been thoroughly explored, and it was the element of democracy (or lack thereof) that was implicit in its existing judicial processes. After combing through different research documents, I realized that the work that existed on this particular topic approached the matter through addressing Constitutional Courts as a whole, whereas I wanted to know more about the different specific elements of the European Court of Justice on a micro level, such as the renewal of judges, the appointment procedure, and the lack of precedential law that exists.

However, through my research, I realized that democratic legitimacy was not something that the Court had prioritized in its legal proceedings. In fact, when I interviewed an Advocat-General, her referendaires, and various professors who specialized in EU integration and EU Law, it became evident that there was much more emphasis placed on whether or not the ECJ’s judicial processes were efficient rather than democratic. The general consensus was that the Court strives to process and adjudicate on a large number of cases in a reasonable amount of time, and doing so in a manner that is compatible with the goal of uniformly applying EU Law in all member states. While these experts did admit that there were structural flaws within the ECJ’s system of appointing judges as well as occasional conflicts between EU Law and a member state’s Constitutional law, they did not see these flaws as areas of major significance and were not hesitant to defend these areas of concern. According to Professor Jorge Gerkrath of the University of Luxembourg, the appointment process is “very transparent,” and the renewal of judges does not pose as a problem. Advocat General Julianne Kokott echoed these sentiments in the interview I conducted with her; she claimed that the appointment process “functions quite nicely,” and that judges have a “lengthy preparation process” to ready themselves and adequately prepare themselves for the bench.

These findings were certainly contrary to my initial perceptions of the European Court of Justice. When laying the groundwork for my initial research plans, I was under the false impression that all international courts and tribunals strive towards achieving an optimal democratic state. However, once I conducted the interviews with various experts, it’s clear that a democratic deficit does not comprise a problem that the Court is particularly concerned with; instead, the experts that I spoke with expressed more apprehension about the Court becoming overburdened with cases and becoming less efficient over time as the turnover for each court case had reached two years.

The experience of traveling to Luxembourg, Luxembourg to conduct research on-site was fundamental to the progress that I have made on my research proposal. By being able to sit in on a public hearing (and actively witness the judges adjudicate in person), I was able to assess the effectiveness of the Court procedure and how the decisions made were transposed into laws and policies of Member States. Similarly, by being able to conduct interviews with actual members of the ECJ, I was able to get the first-hand perspective of someone who serves as an authority of the judicial proceedings and who has direct influence into the scope of the Court.

This experience significantly furthered the development of my research and allowed me to collect information that can be synthesized into my senior thesis that I would have been otherwise unable to obtain. But on a broader level, by being able to individually travel to Luxembourg and embark on a research project from beginning to end, I was able to refine my organizational skills and research skills, not to mention achieve greater development both professionally and within the realm of my studies here at Notre Dame.