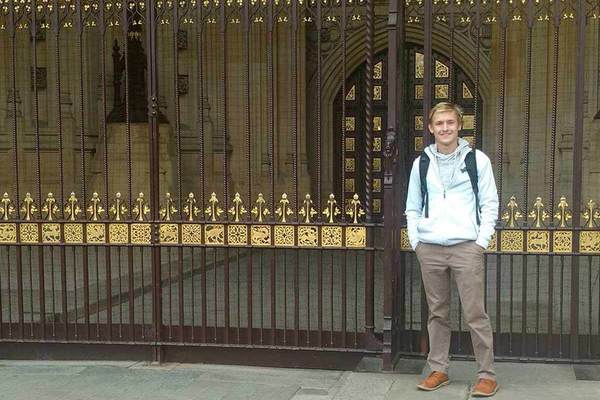 How strong is the British economy in the immediate wake of Brexit? Sophomore Alex Kruszewski recently traveled to London to investigate what the financial markets could tell us on a Break Travel and Research Grant from the Nanovic Institute.

One of the largest questions of economics pertains to the impact of political events on the financial markets. In the specific political dissolution of the United Kingdom and the European Union, known as Brexit, how did financial markets reflect the decision of the UK to leave the Union? What does this tell investors and scholars about the strength of the United Kingdom and global economies post-Brexit? What will these financial indicators do next?

Many investment banks, scholars, and even governmental officials have remarked that the resurgence of stock baskets in Europe such as the FTSE 100 to their pre-Brexit levels indicate that Brexit has not, and will not in the future, have a lasting effect the British economy. However, the depreciation of Great Britain’s Sterling Pound is too often ignored by financial analysts and scholars when predicting a bullish economy. To that end, this research project aims to explain FTSE’s outlook, and therefore the outlook of the UK economy, in light of the pound’s depreciation.

On the day of Brexit, June 23rd, the Great Britain Pound depreciated 11.1%. Following the immediate effect, the pound has continued to depreciate and sits at its lowest point in ten years. Continuing this trend, Goldman Sachs and Merrill Lynch both project long-term depreciation for the pound as a result of Brexit. During my trip to London, I was able to sit in on parliamentary meetings surrounding the terms of the invocation of Article 50, which triggers Britain’s leave from the European Union. Parliament is currently talking about a ‘hard’ Brexit. What I heard in meetings was that the terms of dissolution will include harsh immigration laws, a departure from the trading bloc, and strict commerce barriers between the UK and EU. If this ‘hard’ Brexit occurs, Credit Suisse projects the Pound to depreciate to 1.07 US dollars from the current spot price of 1.22 US dollars.

FTSE 100, the basket of stocks in the UK akin to the United State’s S&P 500 has rallied post-Brexit by 17.38%. Professors at Oxford, Cambridge, and the London School of  Economics that I met with all point to these FTSE levels as indicators that the British economy was unhindered by Brexit. One such professor, however, mentioned to me that the FTSE basket is composed of blue-chip companies, many of which are involved in oil extraction or gold mining. When further questioned, the same professor conceded to me that the correlation between commodity price appreciation and FTSE is very strong. Upon further research both oil and gold prices have seen record surges in the past few months.

The crucial take away from this research is that the boon in FTSE of 17.38% is not an indicator that the financial markets have been unhindered by Brexit, as many investment banks and these scholars say, but rather that the adverse effects of the depreciating currency have thus far been offset by a booming commodity industry. As such, when oil prices plateau and gold prices depreciate over the next few months, as nearly all major investment banks predict, the market will see the effects of the depreciating currency through huge drops in FTSE similar to what was seen in the few days immediately following Brexit. The significance of this finding, if correct, is huge. With emerging global economies such as India, Russia, Indonesia, Brazil, South Korea, Australia, and Mexico all seeing massive economic gains, the United Kingdom (which currently boasts the fifth largest economy in the world) could see its relative economic strength in jeopardy. Additionally, I’m not alone in my belief that the UK is facing economic hard times and potential recession in the years to come. George Soros, a billionaire who made his fortune predicting Britain’s economic hardships, says of Brexit, “The consequences for the real economy will be comparable only to the financial crisis of 2007-2008.” I firmly agree.

Finally, this research project inspired me to write in more detail about global currencies and economies post-Brexit in a nearly 40-page work completed partially during my time in London. This opportunity granted to me by the Nanovic Institute truly inspired my interest in global economies and financial markets and confirmed my beliefs that I want to go into a sector where I can analyze and act upon financial forecasts of securities, currencies, etc. Additionally, the project has motivated me to apply to start an on-campus research project on predictive correlation coefficients of financial indicators.