Where will your Nanovic grant take you? It took Abigail Bartels ('16), who is working on majors in Political Science and Theology and minors in Gender Studies and European Studies, to Denmark to research Danish politics and Catholicism. It didn't stop there, however. It also took her to Eastern Washington University, where she presented at the National Conference on Undergraduate Research. It also took her to a presentation at the Undergraduate Scholars Conference, organized by Notre Dame's Center for Undergraduate Scholarly Engagement and the College of Science. Congratulations to Abigail for all that she has accomplished! Here she recounts her research experience for us. 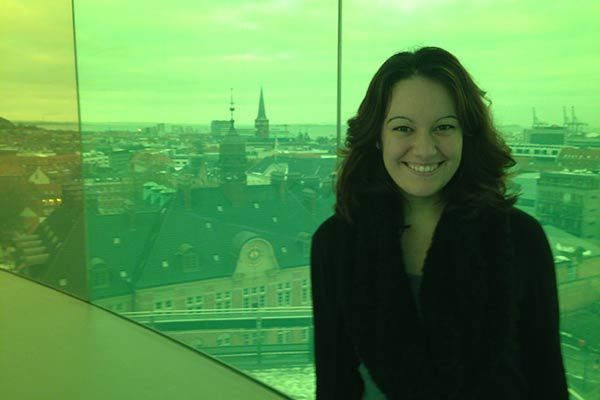 Thanks to the grant from the Nanovic Institute, I was able to execute my project design for my paper entitled “Danish and Catholic: An overview of politics and Catholicism in the world’s least religious country.” I am writing this paper as my project for the Center for the Study of Religion and Society Undergraduate Fellowship program.

My interest in this project stems from the complexity of the relationship between church and state. Denmark, commonly referred to by sociologists as the least religious country on earth, operates a state church roughly following the theology of Martin Luther. Danish citizens are born as tax-paying members of this church and though most become atheists, many remain members of the church for the entirety of their lives. Catholic Danes have held the right to religious freedom in Denmark for less than two hundred years and represent a small minority of Danish citizens. One factor that has kept the Catholic Church alive over the years is immigration. Given the highly anti-immigrant culture in Denmark, the impact of immigration has further ostracized Catholics from Danish society. In recent years, this separation has grouped Catholics with Jews and Muslims as victims of discrimination in European societies such as Denmark. This separation based on religious identity can be identified as a precursor to many societal problems, from discrimination to genocide.

In order to fully comprehend the history of Danish-Catholic relations and to identify how far the discrimination has gone today, I conducted seven interviews throughout the winter months with Danish political leaders and Danish Catholics, asking them about their professional or day to day experience with the relationship between the Danish state and the Catholic Church.

I had expected to find that Catholic political efforts are few and ineffective while daily discrimination against Catholics is prevalent and growing worse.

Joint funding from the Center for the Study of Religion and Society and the Nanovic Institute allowed me to spend nine days in Denmark, conducting seven interviews total. I was able to speak to a priest, two nuns, three lay people, and a politician. This trip provided me many valuable experiences, but four in particular stand out in my memory.

First and foremost, I found answers to the question I was seeking to answer through my paper. From just these seven interviews, it appears that being a Catholic in Denmark is viewed as an embarrassing fact about oneself that one does not bring up in discussion. Discrimination takes the form of societal pity for those unfortunate enough to be Catholic, but as of yet this has not progressed to violence. Also, political efforts by Catholics are in fact very few and very ineffective. I did learn about the main Christian political group, the Christian Democrats, which currently represents the only religious-based major party in Denmark. Fascinatingly, this group, though founded by a Catholic, emphasizes simply Christian values and does not even ask its members whether they are Christian or not. Some Catholics abstain from politics all together; some participate in the Christian Democrats; some find other parties that uphold Catholic social and economic teaching. I was fortunate enough to be able to interview Catholics in each of these three groups.

Second, I was able to practice my interviewing skills, which will be increasingly helpful as I continue to immerse myself in the field of research. These are skills that I plan to use throughout the rest of my undergraduate education, during graduate school, and as an academic someday.

Third, my Danish improved greatly over the trip. Though the interviews were conducted in English, I maneuvered around the country using Danish. The work I had put in since my last trip to Denmark has paid off, and I am capable of understanding most of what I hear. However, over the course of the trip, I was able to start forming sentences on my own as well. I was very grateful for the opportunity to immerse myself for a week and a half in a language that has no official representation at Notre Dame.

Fourth, I learned about Danish politics, Catholicism, and culture through observation. Even outside the interviews, I discovered interesting phenomena occurring. For example, many individuals of Asian descent attended Danish mass with me, but would chat in other languages after the service was over. This confirmed the studies I had read discussing the importance of the immigrant and recently naturalized population to the survival of Catholicism in Denmark.  Experiences like these can occur only when one is physically present in the culture, which the Nanovic grant allowed me to be.

I plan to finish my paper over the next three months. My abstract for it has been accepted to the National Conference on Undergraduate Research, which takes places in April. I hope that this paper will give insight into how religion functions in a so-called godless society – how the religion impacts the society and vice versa. I hope most of all that it will give us a more comprehensive and inclusive idea of the ways religious discrimination manifests itself in today’s world.

Once again, I am very grateful for all the Nanovic has done to help me with this project. Thank you very much for your help and for your financial support.