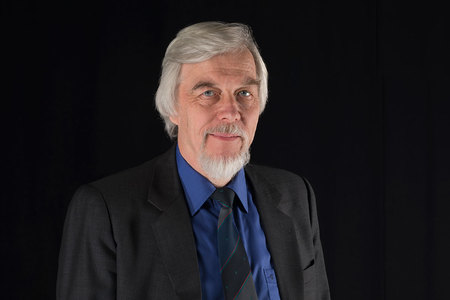 Rolf-Dieter Heuer served as Director-General of CERN, the European Organization
for Nuclear Research, from 2009 to 2015. (Image: CERN)

Rolf-Dieter Heuer, former Director-General of CERN, the European Organization for Nuclear Research, will present the Nanovic Forum Lecture entitled “Science Bridging Cultures and Nations: Exploring the Early Universe” on February 21 (Tuesday) in Jordan Hall of Science at 5:00 p.m. Mary Galvin, William K. Warren Foundation Dean and Professor of Chemistry and Biochemistry in the College of Science will introduce the lecture.

Heuer will also present an informal colloquium on February 22 (Wednesday) at 5:15 p.m. entitled “The Higgs-Boson, CERN, and its Research Activities” in Nieuwland Hall, room 123 moderated by Michael Hildreth, Associate Dean of Research and Graduate Studies and Professor of Physics in the College of Science.  Both events are free and open to the public.

Professor Hildreth noted that Heuer’s “tenure as Director-General of CERN signaled a new era of scientific discovery, and, equally important, a new era of engagement between science, the arts and humanities, and the general public.” He anticipates that this visit to Notre Dame will engage scientists, humanists, artists, and students with his vision of scientific excellence as well as excellence in conveying the excitement and importance of science itself.

A. James McAdams, Director of the Nanovic Institute for European Studies, which is hosting the visit, describes Professor Heuer’s visit as, “a terrific opportunity for the sciences and engineering, and for the whole Notre Dame community.”

The Nanovic Institute, an integral part of the Keough School of Global Affairs at the University of Notre Dame, established the Nanovic Forum through the generosity of Robert and Elizabeth Nanovic, in order to continue to deepen Notre Dame’s rich tradition of connections to Europe by bringing prominent figures to campus in a wide range of fields to explore, discuss, and debate the most pressing questions about Europe today.

More information on this visit and an archive of past Forum lectures is available at nanovic.nd.edu/forum.