Tom Gresik, Faculty Fellow at the Nanovic Institute and Professor in the Notre Dame Economics Department, recently published a paper on income shifting in the Journal of Public Economics and was appointed to the Academic Advisory Board at the Norwegian Center for Taxation.

In a recent interview, Dr. Gresik discusses these accomplishments, along with other European economic issues.

Can you tell us what you study at Notre Dame and how you became interested in those issues?

My current research focuses on the strategies multinational firms use to move money and assets among the countries in which they operate, with the goal of lowering the corporate income taxes they pay, and on the policies governments adopt either to encourage or discourage this behavior.

A common focus of all my research has been on understanding the role of asymmetric information on the behavior of firms, markets, and governments. Early in my career I became interested in multinational behavior and regulation because multinational firms have better information than governments about investment opportunities and costs in each country.  The ways in which firms exploit this advantage and the ways governments try to respond are fascinating and were not well understood when I first started working on this topic in the early 1990s.

I continue to be fascinated by this topic in large part because moderate amounts of tax avoidance behavior actually helps increase investment, employment, and wages in many countries.  So what looks like socially harmful behavior can have positive benefits for both developed and developing countries.  Understanding the distinction between socially productive and unproductive behavior by both firms and governments is critical as the world we live in becomes increasingly globalized.

You recently published a paper in the Journal of Public Economics entitled “Immobilizing Corporate Income Shifting: Should It Be Safe To Strip the Harbor?” (co-authored with Dirk Schindler and Guttorm Schjelderup).  What is corporate income shifting?  What are its benefits and drawbacks (especially in Europe)?

Income shifting refers to the practice by multinational firms of moving income out of high-tax countries and into low-tax countries before it is taxed.  One income shifting practice is to use debt instead of equity to finance operations in a country.  Suppose a U.S. firm wants to build and operate a factory in Germany.  Rather than investing in the German company through a stock investment, the U.S. firm can first send its investment to an office in a tax haven country, such as Bermuda, and have the Bermuda office lend the money to the German company.  Interest payments on the debt reduce the German company's taxable income.  Since the German company can pay a tax rate of as much as 33% while the corporate tax rate in Bermuda is essentially zero, every dollar of interest payments reduces the American firm's global taxes by 33 cents.  On the positive side, the ability to fund investments in Germany with debt lowers the cost of investing in Germany.  This encourages more foreign business investment into Germany, which in turn creates more jobs and increases wages for German workers.  On the negative side, Germany can collect fewer tax revenues.  It turns out that a small amount of debt financing is good for the German economy, while a large amount can be harmful.

A dark side to debt financing, to the extent it channels the investment through tax havens, is that tax havens are not only countries with low tax rates but also strong secrecy laws.  The secrecy laws make it easier for money from criminal activities such as drug trafficking, weapons trade, and human trafficking to be hidden and often times invested in sound banks.  ​Interestingly, one of the tax haven jurisdictions with the strongest secrecy laws is Delaware because one does not need to provide any proof of identity to set up a personal corporation.

In your paper, you and your co-authors advocate for the use of an “earnings stripping” rule to respond to corporate income shifting.  Can you explain this rule to those of us who don’t have an economics background?  The name of the rule, “earnings stripping,” makes it sound alarming.  Is the rule as controversial as it sounds?

A figure from Dr. Gresik's paper illustrates the percentage of increase in national income that is expected to result when a country switches from a safe harbor rule to an earnings stripping rule. The figure illustrates that the more income shifting the earnings stripping rule allows for, the greater the increase in national income.

Because countries recognize that too much debt financing can be harmful to their economies, a number of them have enacted what are called "thin capitalization" rules.  These rules limit the amount of debt financing from which a company can get tax savings.  One type of thin capitalization rule is called a safe harbor rule and the other type is called an earnings stripping rule. Safe harbor rules simply place a limit on the amount of debt a firm can have while earnings stripping rules place a limit on the amount of interest payments a firm can make and still receive a tax deduction.  So the actual rules are not as sinister as their names suggest.

A few countries, such as the United States, France, and Denmark, use combinations of the two rules.  Several years ago a ruling by the European Court of Justice prompted a number of European countries to switch from using a safe harbor rule to using an earnings stripping rule.  The contribution of the paper I recently published with two Norwegian colleagues shows that an earnings stripping rule encourages more foreign business investment and fewer tax revenue losses than a safe harbor rule or a combined rule, hence the suggestive wording in the title of the paper. 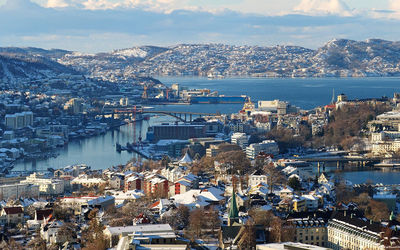 Bergen, Norway, where the Norwegian Center for Taxation is located.

Five years ago, the Norwegian Ministry of Finance provided funding that created the Norwegian Center for Taxation at the Norwegian School of Economics and Business in Bergen.  With the tremendous growth and sophistication of global businesses, the government recognized that it needed to train more people who understood both the positive and negative aspects of multinational firms and it needed to support more multi-disciplinary research on multinational behavior and policy design.  (I had the honor of giving the keynote address at the inaugural ceremonies for the Center.) Among the activities of the Center are that it provides funding for faculty positions in public economics (the broad term used to reference research in taxation and government spending policies) and law and accounting, it supports post-docs and graduate students, and it sponsors conferences.  It has been so successful in all its efforts that the funding from the Ministry of Finance was just renewed for another five years.

A few years ago with funding from Notre Dame International (NDI), ND co-sponsored a multi-disciplinary conference in London on multinational behavior with the Norwegian Center and a Max Planck Institute in Munich.  Participants at the London conference included economists, legal scholars, accounting scholars, representatives from Her Majesty's Treasury, a distinguished British tax lawyer, and the head of tax planning for a major multinational firm. In November, the three groups will hold a second conference in Bergen, this time with key support from the Nanovic Institute as well as NDI and the Kellogg Institute. The first conference led to a number of published papers, including the one mentioned above.  It is our hope that the second conference will be as successful. ​

One of the goals of the Norwegian Center for Taxation for the next five years is to increase its international exposure.  To help the Center achieve this goal, it established an Academic Advisory Board.  The responsibilities of the members of this board are to advise the Director on how to increase the Center's visibility and to guide some of the Center's research initiatives.   One of the Board's strategies is to expand the Center's connections with major government bodies such as the Organisation for Economic Co-operation and Development (OECD) and the practitioner community.

Finally, when I think of the economic issues of Europe today, what immediately comes to mind are the economic challenges resulting from Brexit, the economic problems and high unemployment rates in countries like Greece and Spain, and the economic complications of accepting refugees from Syria and other war-torn nations.  What’s an important economic issue that Europe faces today that we might not hear about as much in the U.S.?​

Your list represents the top high-profile European economic issues.  Key to addressing these issues across Europe will be economic policies that grow the private sector in each country by attracting new business investment and lead to both job and wage growth.  When tax rates are high, large international businesses can employ income shifting strategies to minimize their tax bills.  This means that smaller, often domestic, businesses bear a disproportionate share of the tax burden.  This disparate tax treatment not only puts stress on a country's fiscal health, it also creates many of the nationalistic political tensions that are becoming more prominent across the world.  The OECD is trying to address the income shifting challenges through its Base Erosion and Profit Shifting (BEPS) initiatives.  Even though the United States is an OECD member, the impact of BEPS does not get much attention here. The other news we tend not to hear about are policies that undermine BEPS, such as last week's decision by The Netherlands to eliminate taxes on dividend income.  It is a sign that the European members of the OECD are not on the same page.  We also do not hear much debate about the large public sectors in many European countries that can make it harder for those countries to grow its private sector.