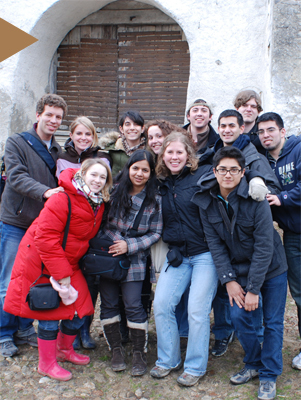 With the Institute’s support, Nanovic faculty fellow Krupali Uplekar journeyed this March with her class of fourth-year architecture students to the remote Siebenbuergen region in Romania to document unique Transylvanian Saxon villages that were built there in the twelfth and thirteen centuries. This investigation was not a simple academic exercise; rather, their research and recommendations may contribute to the revitalization and economic growth of the region and represent the first of many possible endeavors in there. It is an excellent example of what Notre Dame does uniquely well: research as service.

Specifically, the class’s documentation will enable them not only to assess the conditions of the homes in this region and to understand the architectural style, but will contribute to the drafting of a “patternbook” that can be used to instruct the villagers in simple repair techniques to preserve the architectural features. The students will also be designing possible renovations that would enable each home to convert a room into a guest suite or small store for selling the local crafts. By preserving the character of these villages, in compliance with European Union regulations, the area may become a destination for tourists interested in hiking or exploring flora, which because of the consistently organic farming preserves medieval species.

Consistent with the Nanovic Institute’s goal of fostering interdisciplinary connections, the architects were joined by Marcela Perett, a graduate student from the Medieval Institute, who spent the trip exploring the churches in each of the villages and viewing the manuscripts contained in them. Further connections are possible in the future: the region could benefit from lessons in micro-lending from the Mendoza College of Business, could host biology or history students interested in the local environment, could provide a place of study for anthropologists interested in changing populations and the Roma, and certainly would appreciate the service of undergraduates who could help to restore their homes.

The architecture students had each studied in Rome for the previous year, but reported that this region differed markedly from any they had previously encountered. They were also able to interact with the local people in greater depth. Students appreciated the opportunity to work on a project that will affect real people, and reported greater motivation to pursue their assignments. As their designs and drawings will be collected in a single publishable work, they had to collaborate well, including mixing all their paint colors as a group so that the drawings in the final product will match. As this article goes to press, the students remain hard at work preparing their designs to present to the university community, and that may someday soon be implemented in a faraway region. They served their first clients well.