On Thursday, March 24, the Nanovic Institute for European Studies was honored to welcome Lord Patten of Barnes to deliver the 2022 Barrett Family Lecture, which took place at the University of Notre Dame London Global Gateway. Lord Patten has been the Chancellor of the University of Oxford since 2003 and has had a long career in politics, diplomacy, and foreign service, including as the last British governor of Hong Kong from 1992 to 1997.

In a lecture titled “Is There a New World Order?” Lord Patten discusses how the international rule book, in place since the end of the Second World War and largely written by the United States and the world’s liberal democracies, is being affected by the economic rise of China and its assault on international norms of behavior. He also reflected on the part played by authoritarian states, especially Russia, within this dynamic. Clemens Sedmak, director of the Nanovic Institute and professor of social ethics, introduced and welcomed Lord Patten.

The Institute has prepared an event brief that summarizes Lord Patten’s lecture, and has made available a live recording for anyone who would like to watch the event.

During his visit to the Notre Dame London Global Gateway, Lord Patten also spoke to Felipe Fernández-Armesto, the William P. Reynolds Professor of History at the University of Notre Dame. This podcast captures their conversation, which focused on the subject of Lord Patten’s lecture, his experience as a politician and diplomat, and his views on recent developments in a troubled world.

View or Download the Event Brief | Listen to the podcast 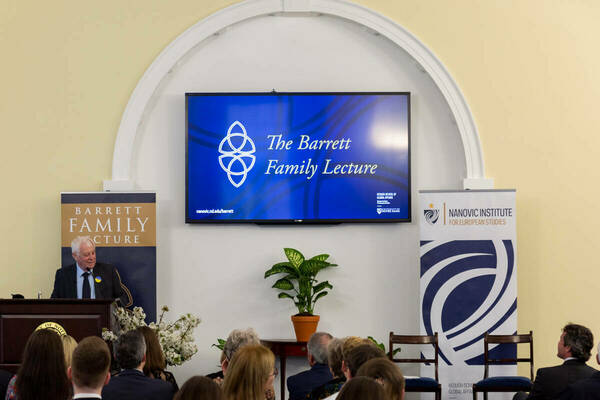