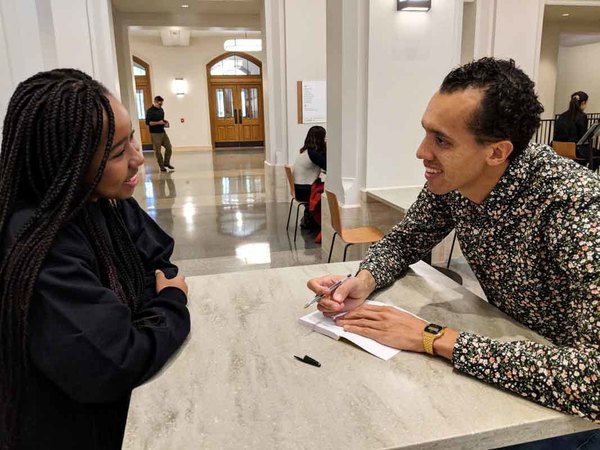 Small Country follows Gabriel, a young boy and ostensible reflection of Faye as a child, whose lust for life is abruptly stalled by the dark reality of the Rwandan genocide. Deftly exploring the immediate and residual effects of the Rwandan atrocities, Small Country has been awarded numerous literary prizes, among them the Prix Goncourt des Lycéens. Now published in thirty countries worldwide, Faye’s novel also examines the displacement of social identity, something he experienced firsthand after fleeing from Burundi to France following the Rwandan genocide.

Sonja Stojanovic, PhD, Assistant Professor of French and a Faculty Fellow at the Nanovic Institute for European Studies, was a lead organizer of the event. In addition to being thrilled about Notre Dame serving as Gaël Faye's first stop on a week-long book tour of the U.S., she pointed out that his presence and passion brought together students, faculty, and members of the community to reflect on how relevant and vital it is to talk about literature and its social roles in the world.

“As a professor and scholar of contemporary literature, being able to bring authors to campus is one of my greatest privileges and joys,” said Stojanovic. “It is especially exciting when students get to meet and interact with the person whose work they've studied in their classes. Gaël Faye’s willingness to meet with so many people throughout the day is a testimony to his openness and generosity.”

After reading Small Country, Regis Isirahenda, a Notre Dame sophomore pursuing degrees in Economics and Math, was impressed by Faye’s use of poetry in storytelling but was left with a myriad of questions about the motives behind his stylistic approach.  When he caught wind of Faye’s visit, Regis knew there was no way he would miss the event.

“The good thing with contemporary novelists, like Gaël, they are out there,” said Regis. “They can be reached out to answer the most burning questions from their audience.”

Regis had the opportunity to sit with Faye for breakfast and then give him a tour of Notre Dame’s campus. They discussed Faye’s novel, the experiences of growing up in the same neighborhood, and the socio-political situations of their home countries Burundi and Rwanda. “Never in my life would I have imagined spending hours one-on-one with Gaël Faye, whom I consider to be not only the smartest and the most talented Burundian artist but also the ambassador of the Burundian literature of the 21st century,” said Regis.

In an event open to the public, Faye read excerpts from Small Country and discussed his work as an author, songwriter, and artist with Alison Rice, Associate Professor of French and Francophone Studies and Director of the Institute for Scholarship in the Liberal Arts at Notre Dame. Regis remarked how moved he was by Faye’s commitment to his passion of storytelling and his fearless attitude to living a meaningful life.

“During the talk he gave to the public, Gaël explained why he chose to leave a high-paying finance job in London to pursue his passion for poetry and rap.  He said he found joy in poetry and writing was his contribution to building the global edifice,” said Regis. “As if that was not motivational enough, he shared how as a rapper, being a novelist had never crossed his mind until he realized everyone has a story to tell. He invited his audience to tell their stories in any shape or form. But beyond all, he explained how growing up in the middle of a war and genocide shaped his life, his career, and gave him the ability to recognize the power of writing as a therapy.

“I was amazed by his wisdom and his humility. He approaches questions with detailed illustrations from his life full of experiences and makes sure you are answered with clarity. His French is so impeccable, no wonder why his first book became so successful. He is also an eloquent and informed speaker; he was able to enlighten me and the audience on different issues of our time in a remarkable way.”

“Gaël Faye's candor about his own trajectory will resonate with many of our students, who are thinking about their future after Notre Dame, and who can take to heart the importance of carving their own path,” said Stojanovic. “You never know when a frustration will turn into an opportunity.”