“The level of turmoil and uncertainty in Italy right now is very striking. We don’t know what will happen.” 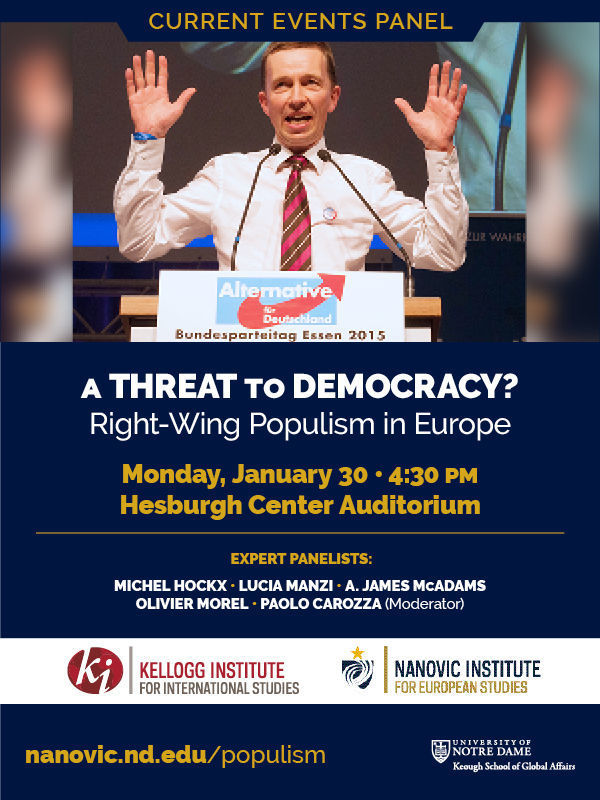 Ms. Manzi, you will be a discussant in the upcoming Nanovic/Kellogg panel on January 30th. Can you tell us a little about your background?

Yes, I am from Italy and was educated at the the Università degli Studi di Milano [the ‘Statale’], where I earned baccalaureate and Master’s degrees in political science. I am now a fifth-year Ph.D. student at Notre Dame specializing in comparative politics and constitutional studies.

I am writing a dissertation in comparative judicial politics, especially as it regards political corruption. The purpose of my work is to outline the conditions for the effective uncovering of political corruption by the judiciary. Italy is my case study. I am still trying to decide the precise wording of the title, but it will be about the Italian judiciary and political accountability.

This sounds like a timely topic given the recent constitutional referendum in Italy. But before we get to that and other issues, can you tell me anything about students and politics in Italy these days? Are students politically organized and active?

At the Statale, students do organize themselves mostly along political lines. You can tell which groups tend toward the Left or Right in terms of the issues they raise. Student representatives do show their political leanings in the causes they advance. From time to time there are actual protests, “occupations,” and so on, but these are from the fringes. 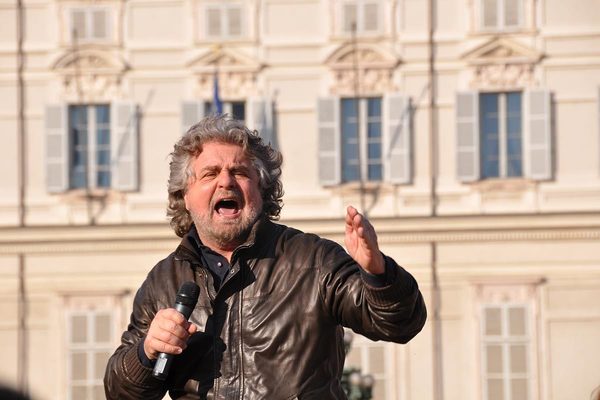 Beppe Grillo in Piazza Castello in Turin for the campaign of the Movimento 5 Stelle Piemonte, March 2010. Giorgio Brida via cc-by-2.0

Good question. We should probably start the discussion by focusing on Movimento 5 Stelle [M5S] because this is a movement that proposes to eliminate the distance between the political system and the citizen. It seeks to transform the political system in Italy in a revolutionary way by means of direct democracy. It tries to do this through the use of online tools, such as Beppe Grillo’s blog. On this blog, people in the movement discuss positions, policies, and candidates, and even vote on them. If we focus our attention on the M5S, we can say that populism in Italy is a movement that thrives on anti-elite feelings and general distrust toward the political class. It is not right-wing or left-wing, it capitalizes on citizens' disappointment toward traditional politics.

So populism in Italy is more like a new movement to establish direct democracy.

Yes and no. You have to understand that M5S did not come out of nowhere. It is the outcome of years of conversation in Italy about political corruption. After the huge investigation that uncovered the presence of systemic political corruption in 1992 - the so called "Clean Hands investigation" - political parties in Italy have failed to re-build a relationship of "trust" with citizens. The general perception is that politicians are mostly corrupt and not interested in the common good. The M5S has built its appeal on this general situation. The movement itself started with rallies when Grillo established Vaffa’ days, sort of like rallies, that represented a public protest against the whole political elites as corrupt and inadequate. For decades, the movement has been strongly anti-system and anti-elite.

Is it the only movement in Italy that can be called ‘populist’ these days? Is there populism in the more identifiably right and the left parties?

Well, on the right there is the Lega Nord. It started as a party that pushed for regional secession. After that, it became a force for regionalism. Now it is showing signs of wanting to become more national in scope by appealing to sentiments regarding immigration, which affect the country as a whole. As for the Italian Left, no, there is no populist movement because with the death of the Socialist party, the center-left party under Renzi has been the establishment. It is now fractured internally and trying to determine who will lead the party in the next general election.

Has the next Italian election been scheduled?

No, and that is part of the problem. The current government could last until 2018, but the recent referendum on December 4th makes that less likely. We don’t know what will happen, or even when it will happen.

And yet that kind of uncertainty was part of what that very referendum was designed to forestall. I’ve had to make a little tally sheet of all the proposed changes, which sound quite complicated. The basic idea though was to bring more stability to Italy’s political system, was it not?

The design of Italy’s legislature would have been the biggest change. Under the current system, both chambers have to approve the same bill in the same form. They engage in the same process, and have to arrive at the same conclusion. It takes a long time to get to that kind of unanimity, which slows everything down. The proposal in the referendum would have reduced the power of the Senate in that process, essentially stripping it of legislative power except in a very few cases. This change would have made it easier for any majority in Parliament to implement its own agenda. In that sense, the constitutional reform would have enhanced stability, and possibly accountability.

And so Italian voters did not want so significant a change to the Italian constitution? Was that why the referendum failed?

One can easily imagine the influence of M5S on that outcome. Let’s turn to the title of the upcoming panel. Is M5S a populist threat to democracy in Italy?

The M5S is an attempt to enhance transparency and accountability by introducing significant elements of "direct democracy" into our institutions. The question is the extent to which that is true. The proposals of M5S are put to a vote, yes. But not everything is brought forward. Grillo and Casalegio for example are the leaders of the movement, but they have not been elected. The decision-making process within the M5S is not always transparent or predictable. For instance, recently Grillo has also brought the affiliation of the M5S in the parliament of the European Union up for a vote, which resulted in M5S asking to be affiliated with the Alliance of Liberal and Democrats for Europe [ALDE], a group of MPs within the European Parliament, instead of the group that contained UKIP. However, no member of the M5S expected such a change, which also seemed to contradict the M5S' notorious anti-EU position. ALDE is strongly pro-EU.  Bringing this to an online vote was a complete surprise. Thus there is uncertainty about the internal processes of M5S and its division of powers. It looks transparent, but certain dimensions of it are not.

It certainly sounds like some sort of parallel political culture.

Certain features are entirely new and interesting. There are members now of the City Council of Rome who are members of M5S. To remain members of M5S, they had to sign an actual contract that stipulated that, if they contradicted or dissented from the M5S' ethical code or main policy stances, they would pay a fine of 150,000 euros for doing that. Of course, the ones formerly in charge of ascertaining whether any representative would violate or break the ethical code are Grillo and Casaleggio, who also reserve themselves - and the M5S "online affiliates" - the right to dismiss M5S members elected to the city council who do not comply with the Movement's ethical code. In other words, Grillo and Casaleggio reserved for themselves the right to ask the M5S representative within the Rome city council to resign. This contract is an attempt to enforce party discipline where none exists — people in M5S are not trained in some ideology. They do not “caucus” in person. All policy issues are discussed and voted for online. I think the latest one was related to energy policy.

Does the M5S version of populism have a future in Italy?

Well, we don’t know the electoral rules yet, but the political consensus in Italy is rising constantly in favor of M5S. In a general election, we would probably see the majority of Italy divided between the PD [Partito Democratico] and M5S.

So does that indicate a shift to the right?

Difficult to say. The M5S includes members of both the left and the right. The left seems to be the source of the anti-financial-institution rhetoric, the part of the movement that is against international bankers, is anti-Wall Street, and anti-EU. They are a little like Bernie Sanders supporters. And then on the right, there is a slight movement in M5S rhetoric toward the right’s rhetoric on illegal immigration. Because the State and the economy is in such a bad way, the rhetoric is that the State should first privilege Italians who are suffering.