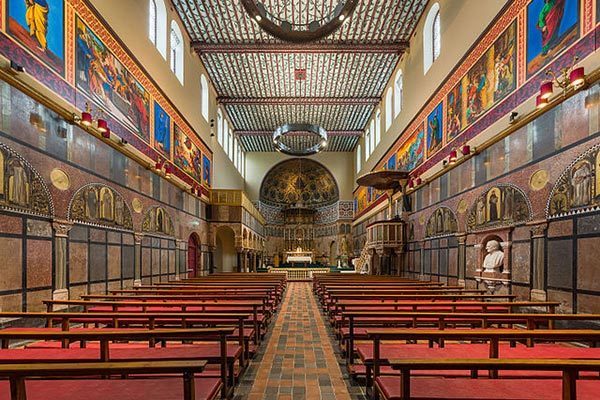 The University of Notre Dame has agreed to steward Newman University Church in Dublin, and to found there the Notre Dame–Newman Center for Faith and Reason. Built by the then-rector of University College Dublin, Blessed John Henry Newman, the church opened in 1856 and has since been an iconic landmark in Dublin’s city center and a testament to the harmony of faith and reason. Newman would later be named a cardinal of the Catholic Church, and was beatified by Pope Benedict XVI in 2010.

In inviting Notre Dame to establish a Center for Faith and Reason in Dublin, the Most Rev. Diarmuid Martin, archbishop of Dublin, said, “I see the establishment of the Notre Dame–Newman Center for Faith and Reason as an opportunity for University Church to return to its original vocation as a focal point for reflection on faith and reason. Dublin can take a new lead in today’s changed social context in something which is part of the rich heritage of Newman’s presence in Dublin. I appreciate especially that the center will not be just an intellectual debating center, but will also work in the formation of an active and committed faith community of young professionals.”

University of Notre Dame President Rev. John I. Jenkins, C.S.C., said, “We are honored by Archbishop Martin’s invitation to expand the University’s presence in Dublin. Notre Dame stands in a proud legacy of uniting faith and reason, and Cardinal Newman is a giant in that pursuit. We are grateful for the opportunity to deepen appreciation for Cardinal Newman and his writings, and to bring the University’s mission to an iconic church on the Dublin cityscape.”

The center’s operations will commence later this fall, and will have a special focus on outreach to young professionals in Dublin, many of whom have not otherwise been drawn to the Catholic Church. The center will give particular attention to excellent liturgy and music, a lecture series and other intellectual activities that aim to integrate faith and reason, service to those in need in Dublin and cultural events inside and outside of Newman University Church.

Father Jenkins has appointed Rev. William R. Dailey, C.S.C., as the director of the center. Father Dailey has served as a lecturer in law at the Notre Dame Law School since 2010, as the St. Thomas More Fellow of the Notre Dame Center for Ethics and Culture since 2013, and as rector of Stanford Hall on the Notre Dame campus for three years. He earned his bachelor’s degree in philosophy from Notre Dame, and after teaching philosophy and working in administration at the University of Portland, Father Dailey attended Columbia Law School, where he was a Harlan Fiske Stone Scholar. He served as a law clerk to Judge Diarmuid F. O’Scannlain of the United States Court of Appeals for the Ninth Circuit, and then practiced law in Washington, D.C., with Wiley Rein LLP. In 2009, he returned to Columbia Law School as a scholar in residence. Father Dailey’s teaching and scholarly interests are in the areas of jurisprudence and legal ethics. He has appeared frequently on MSNBC to comment on faith and culture and has written for the New York Times and Washington Post on faith issues.

Steve Warner, the director of the Notre Dame Folk Choir for the past 35 years, has accepted the role of associate director of the Notre Dame–Newman Center for Faith and Reason, and will have special responsibilities regarding music, liturgy and outreach. In his nearly four decades with Campus Ministry at Notre Dame, Warner established the Folk Choir as a vital component of on-campus worship, and has played a significant role in Notre Dame’s liturgical traditions. Warner has led the ensemble on extensive tours throughout the United States and Canada, and in 2008, they celebrated 20 years and nearly a quarter of a million miles of journeying on the North American continent and to Ireland and Scotland. His liturgical music compositions are published exclusively through World Library Publications.

The Notre Dame–Newman Center for Faith and Reason will complement an array of University activities already active in Ireland, a portion of which is mediated through its network of Global Gateways. The University’s five international Global Gateways — located in Dublin, Beijing, Jerusalem, London and Rome — provide academic and intellectual hubs where scholars, students and leaders from universities, government, business and community gather to discuss, discover and debate issues of topical and enduring relevance.

Additionally, the University’s Keough-Naughton Institute for Irish Studies is a teaching and research institute dedicated to the study and understanding of Irish culture. The institute supports undergraduate and graduate students in their pursuit of Irish studies and provides opportunity for language study, travel classes, semester and summer study in Dublin, internships in Dublin, conference support and more.

In 2015, Notre Dame entered into a partnership with Kylemore Abbey in Connemara, County Galway, to create a center to advance their shared spiritual, cultural and educational missions. Notre Dame operates the House of Brigid in Ireland, a postgraduate service program focused on parish-based liturgical and catechetical ministry.

Originally published by Dennis Brown at news.nd.edu on June 20, 2016.