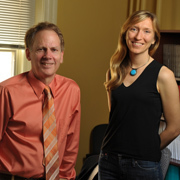 After more than five years of study on the impact of political violence on children and mothers in Northern Ireland, University of Notre Dame faculty member Mark Cummings is expanding his research to include children and families in Croatia, where tens of thousands of people died in ethnic violence between 1991 and 1995.

This summer, Cummings, professor and Notre Dame Chair in Psychology, and Laura Taylor, a Ph.D. candidate in psychology and peace studies, along with colleagues from the University of Zagreb, will collect data on the post-war adjustment of children and parents in Vukovar, a Croatian city deeply divided along ethnic (Croat/Serb) lines.

Once an integrated city that was proud of its ethnic diversity, Vukovar is now so divided that children attend segregated schools and are taught in separate languages, Cummings said. Aggression, anxiety, depression, bullying and other problems are widespread, leading to international concern about the potential for new cycles of violence.

“It’s not enough to sign a peace accord,” Cummings said. “Even long after the war is officially over, if sectarian tension is high, if people still carry the negative psychological processes that resulted from the violence, there’s a real likelihood that a new generation could issue another call to arms.”

The goal of the research is to increase understanding of the long-term effects of ethnic violence on children and families, knowledge that could help promote healing, community recovery and prevention of new outbursts of violence in post-war areas around the world, the researchers said.

“We’re especially interested in identifying factors that protect children and buffer them against the impact of political violence and ethnic tension,” Taylor said. “When children feel safe and secure, it’s more likely that the peace process will hold.”

Cummings, co-founder of Notre Dame’s Center for Children and Families, is a faculty fellow at Notre Dame’s Kroc Institute for International Peace Studies and the Nanovic Institute for European Studies. Laura Taylor is among the first students to pursue a Ph.D. in Notre Dame’s peace studies doctoral program.

Originally published by Joan Fallon at newsinfo.nd.edu on April 30, 2010.