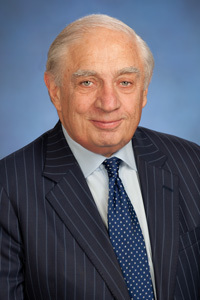 Mr. Peter Sutherland, S.C., will offer the inaugural Barrett Family Lecture in Dublin, Ireland on Monday, March 16, 2015.  His lecture is entitled “European Integration and the Rise of Nationalism,” and will follow a meeting at Notre Dame’s O’Connell House with the Notre Dame students studying abroad in Dublin this semester.

A gift of R. Stephen and Ruth Barrett, the Barrett Family Lecture Series will bring distinguished speakers to the University of Notre Dame’s Global Gateway facilities in Dublin and London. Extending the Nanovic Institute’s mission to enrich the intellectual culture of Notre Dame, the series creates new opportunities for speakers, participants, alumni, and students to explore the ideas, cultures, beliefs, and institutions that shape Europe today.

Mr. Sutherland, the inaugural lecturer, currently serves as Special Representative of the Secretary General of the United Nations for Migration and President of the International Catholic Migration Commission.  Born in Dublin, Mr. Sutherland was educated at Gonzaga College, University College Dublin, and the King’s Inns.  After practicing at the Bar for more than a decade, he was appointed Attorney General of Ireland.  He was subsequently appointed to the European Commission to oversee Competition Policy, and then spent four years as Chairman of Allied Irish Banks.  In 1993, Mr. Sutherland served as the founding Director General of the World Trade Organization.  He has since advised or served on the board of directors of many major companies and organizations in Europe and the United States, including BP, Goldman Sachs International, Eli Lilly, the World Economic Forum Foundation Board, the European Round Table of Industrialists, and the Trilateral Commission.  From 2008 – 2015, he was the Chairman of the London School of Economics.  He also served as Consultor for the Administration of the Patrimony of the Holy See under Pope Benedict XVI. His numerous honors include a Papal Knighthood from Pope Benedict XVI, an honorary Knighthood from Her Majesty Queen Elizabeth II, the Chevalier de la Légion d’Honneur from President Mitterrand, and the Gold Medal of the European Parliament.