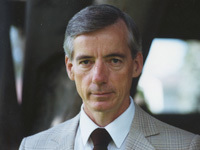 All essays must have been submitted by a registered Minor in European Studies in fulfillment of the European Area Studies Essay Requirement. All essays submitted in fulfillment of this requirement each academic year will be considered for the award, whether written in the Fall or Spring semester. Essays written in a European language other than English will also be considered.

Essays will be judged on the quality of both the student’s research and writing.

James Robert “Bob” Wegs was the Founding Director of the Nanovic Institute for European Studies.

A popular and sought after lecturer, Wegs accompanied a Notre Dame-sponsored cruise on the Danube River in the early 1990s, giving daily talks on the history and culture of the region. Among the passengers were a recently retired investment counselor and 1954 Notre Dame alumnus, Robert S. Nanovic, and his wife Elizabeth. Impressed, the Nanovics later endowed a program devoted to the study of issues which seemed indispensable to an understanding of contemporary Europe: nationalism, citizenship, ethnicity, immigration, and the place of Europe in world history. Notre Dame’s Nanovic Institute for European Studies was established in 1993 with Robert Wegs as its director. He served in that position until 2002.

“The Nanovic Institute would never have come into being without Bob’s vision and inspired leadership,” says A. James McAdams, Scholl Professor of International Affairs and present director of the Nanovic Institute. “He recognized Notre Dame’s great potential in European studies and made it possible for us to become what we are today.”