Meilin Scanish, a junior at the University of Notre Dame, is interested in working in international law and wanted to gain international work experience. After having the chance to travel to Nepal and Qatar for conferences on the conciliation of traditional Islamic theology and modernity, and to France to study the French language, she was looking for a new opportunity abroad. As soon as she learned about the chance to apply for the Nanovic funding to travel to Rome to take part in the Summer Internship Program, she decided to apply and move to Rome for the summer.

Scanish is currently interning at the Justice, Peace, and Integrity of Creation (JPIC) Commission, a division of the International Union of Superiors General (UISG). Their mission is to encourage religious leaders throughout the world to become involved in local peace building activities, with a particular focus on environmental issues, women’s rights, refugees, and trafficked persons.

“Something I’ve appreciated during my time at the JPIC is gaining perspective on what it’s like to work on multiple international projects at once,” says Scanish. “No two days here are quite the same. My most exciting experiences so far have been attending a lecture from the former Irish ambassador to Sierra Leone during the 2013 Ebola outbreak and meeting various European ambassadors to the Holy See, and participating in one of the student climate change protests.”

Scanish has, in fact, participated in one of the 1664 strikes planned in 125 cities around the world for climate change. Several thousands of people gathered in Piazza della Repubblica to march to Piazza Venezia. There were many important messages on the signs: Laudato Sì, Change the system and not the climate, I am away from school to teach you a lesson, and Don’t rob us of our future, to name a few. Scanish found the march to be a moving and empowering experience.

A generation of change

“It was so inspiring to see so many young people come together to advocate energetically for the care of our planet,” she said. “Often, I think, the youth gets a bad reputation of being rebellious, selfish, and too idealistic. This march, with so many teenagers and young adults walking peacefully alongside elder climate change advocates, demonstrated that if we seem rebellious, it’s because we’re passionate about this issue. If we seem selfish, it’s because climate change will affect our generation and each one that follow.”

She says it’s important to show young children that her generation did everything they could to give them a healthy planet to grow up in. 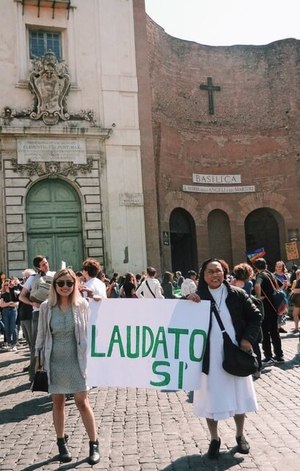 “If we seem idealistic, it’s because we are,” she says. “We truly believe that a drastic but coordinated effort by our governments and fellow citizens can help prevent catastrophic climate change”

Due to the special relationship JPIC has with the Vatican, the commission has a big network of volunteers from congregations from more than a hundred countries. Scanish’s job in Rome is to assist those local congregations with any peace building projects they may have, from rescuing trafficked women in brothels to sending participants to the UN Climate Change Conference in Santiago, Chile.

“At times, it can be daunting,” she says. “Trying to tackle a huge issue like refugees fleeing the war in South Sudan when you’re just a team of a few people in a small office in Rome can feel like an insurmountable challenge. The JPIC’s network is massive, and trying to coordinate the volunteers’ activities when you’re not physically there in the community to see the impact of their action, which might not even be visible until years later anyway, has been eye-opening for me.”

She says with her broad interest in social justice and the law, this internship has given her some insight on what and who it takes for change towards social justice to actually occur.

Scanish is enjoying her experience of living in Rome while doing her internship.

“Rome has been lovely!” she says. “I appreciate how distinct it is from the rest of Europe. You can’t go three feet without seeing something of historical or cultural significance to the contemporary western world.

She says as a history major, it’s humbling and awe-inspiring to see these ancient structures that she’s read about since middle school in person. Living on her own in an international student housing complex has also been a great experience.

“I’ve met fascinating people from all over the world studying different subjects here in Rome, and they’ve been able to teach me a lot about their cultures and life experiences,” she says.

She is adjusting to a slower lifestyle, learning to engage more with the people and to enjoy every moment of her day to the fullest.

“In the US, there’s a particular emphasis on being faster, more efficient, more stressed,” she says. “But here, I get the sense that people have a greater appreciation for taking their time to enjoy themselves, for better or for worse. Meals take longer here, and shops close earlier. Granted, Rome is still a city, and you’ll find people rushing to get past you on the Metro any hour of the day, but you’ll find people sitting out enjoying a long coffee break with friends at any hour of the day as well.”

Scanish is loving her internship experience and is very grateful to have had the opportunity to live and work in another country on the Nanovic funding.

Originally published by Costanza Montanari at rome.nd.edu on June 19, 2019.