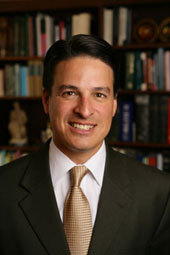 Notre Dame Professor of Law Paolo Carozza is leading a group of more than 50 law professors from 15 countries who have submitted written comments asking the Grand Chamber of the European Court of Human Rights to overturn a seven-judge panel’s ruling that crucifixes may not be displayed in Italian classrooms.

The Grand Chamber of the Court, located in Strasbourg, France, will hold a hearing in the case on June 30.

Last November, a lower panel of the Court ruled in Lautsi v. Italy that the Italian government had violated the human rights of a Finnish atheist parent who objected to crucifixes displayed on the walls of her children’s classrooms. The panel’s controversial decision to find a violation of the European Convention on Human Rights provoked widespread reactions in Italy and beyond.

“The challenges of religious pluralism in contemporary Europe can’t be resolved through the false premise that banning religious symbols from public spaces is somehow a ‘neutral’ position,” Carozza said. “Pluralism must be achieved through a genuine dialogue among the religious traditions of the European peoples, a dialogue that becomes impossible if the symbols representing the historic traditions of the continent are excised from public life, including education.”

Working with European colleagues, Carozza assembled a coalition of prominent legal scholars from across Europe, including former constitutional court judges from three countries, to intervene as amicus curiae in the case. The group is being represented by The Becket Fund for Religious Liberty.

“The signatories to the brief are growing in number every day, coming from all the corners of Europe,” Carozza said. “It is strong evidence of the breadth of and depth of dismay at the ill-founded decision of the Chamber.” He expects even more law professors to join the effort in coming weeks as well.

In their friend-of-the-court brief, the law professors argue that the panel’s ruling needlessly threatens the wide variety of religious symbols on display on public property all over Europe, including national flags, coats of arms, and public art. The professors also warn that the panel’s decision risks setting off a widespread conflict between government and religion. Given the wide diversity of religious practices across Europe, it makes little sense to try to create a secularist “common denominator.” Rather, they contend, the Court should give states substantial leeway to structure the church-state relationship in harmony with tradition, history and culture.

“One of the cornerstones of the construction of modern Europe was precisely the acceptance of a wide variety of practices regarding religion and public life in the various states of the region,” Carozza said. “The European Court of Human Rights has in its best moments been protective of that rich and important diversity of cultures among the peoples of Europe, but the Chamber in this case betrayed that ideal by imposing a very narrow and uniform model of what is required of the state.”

A member of the Notre Dame faculty since 1996, Carozza is actively involved in the Law School’s Center for Civil and Human Rights and serves as director of the doctoral program in international human rights law. He was a member of the Inter-American Commission on Human Rights from 2006 to 2010, and served as that body’s Ppresident. Carozza regularly teaches, publishes and lectures in Italy.

Originally published by Melanie McDonald at newsinfo.nd.edu on June 07, 2010.