Donald P. Kommers was a long-standing Faculty Fellow in the Nanovic Institute for European Studies.  In September 2008, the Nanovic Institute for European Studies in cooperation with several other units of the University of Notre Dame, organized "Conference on Church-State Relations and Religious Liberty: Comparative Perspectives" as a tribute to Donald Kommers for his exceptional contributions to the field of comparative constitutional law and for his notable contributions as a teacher and scholar. The conference brought world-renowned scholars, jurists, and advocates from countries including Australia, Belgium, Canada, Germany, Italy, and the United States to engage the complex issues of church-state relations and religious liberty from a truly comparative perspective.

Read more about the conference and keynote addresses 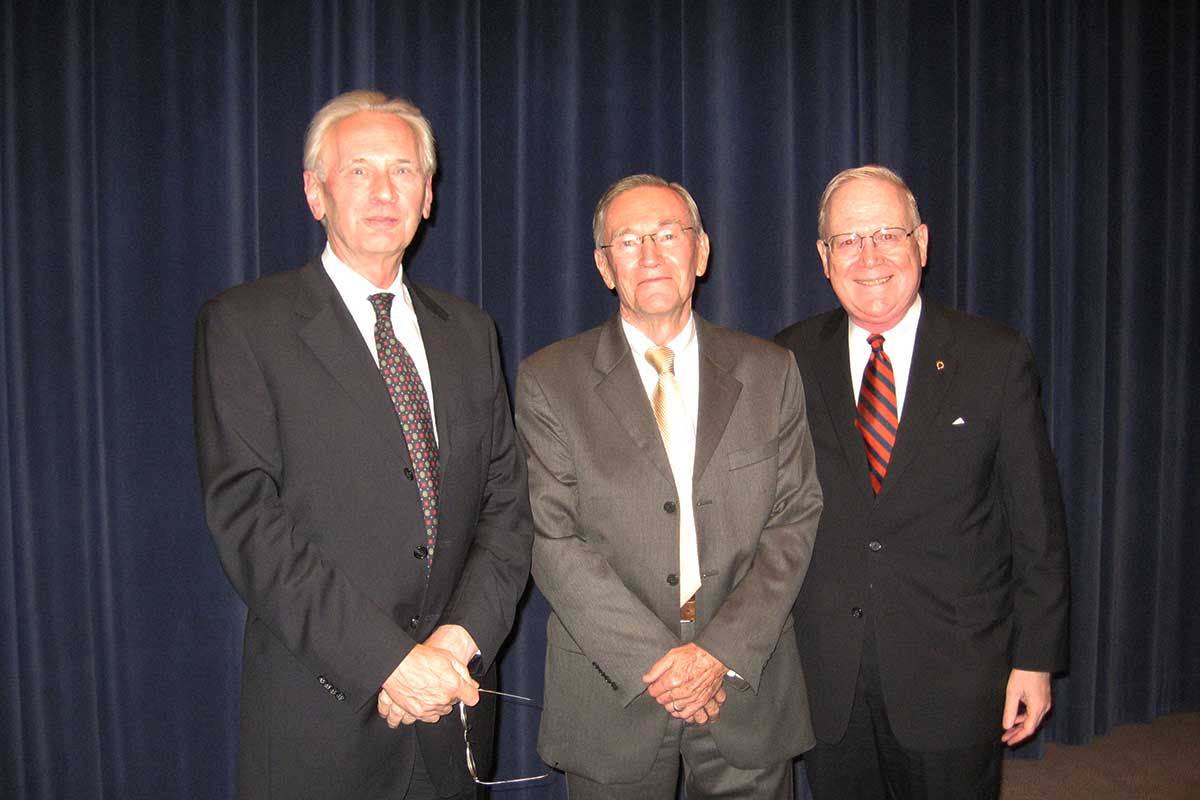 Nanovic Fellow Donald Kommers (center) at the conference in 2008 with guest speakers and participants.

Donald P. Kommers, the Joseph and Elizabeth Robbie Chair in Government and International Studies and a concurrent professor emeritus of law, died Dec. 21 at his home in Holy Cross Village. He was 86.

A member of the Notre Dame faculty since 1963, he was a renowned scholar of German and American constitutional law. He was the author of more than 100 major articles and books, including the widely acclaimed work “The Constitutional Jurisprudence of the Federal Republic of Germany,” the third edition of which was published in 2012 by Duke University Press and recently reviewed with high praise in the Frankfurter Allgemeine Zeitung.

“Don Kommers was a major force in shaping our department and the broader field as well,” said Michael Zuckert, the Nancy R. Dreux Professor of Political Science and former chair of the Department of Political Science. “Notre Dame now has one of the leading programs in constitutional studies in the United States. When Don started out, this was a declining field within political science, but he, together with longtime colleague Sot Barber, led a revival of the field here so that it is now stronger and more firmly established than ever.”

The recipient of major fellowships from the National Endowment for the Humanities, Alexander von Humboldt Foundation, Andrew W. Mellon Foundation, American Philosophical Society, Max Planck Society and Rockefeller Foundation, among others, Kommers also earned the American Bar Association’s Silver Gavel Award and the Berlin Prize from the American Academy in Berlin. He served as president of the National Conference Group on German Politics and was an adviser to President Jimmy Carter’s Commission on the Holocaust.

In 2010, Germany awarded Kommers with the Distinguished Service Cross of the Order of Merit of the Federal Republic of Germany, with its consul general noting that his work on German life and law “remarkably enriched both the American and German legal systems and (built) a bridge between our two countries as few others have.”

Born in Green Bay, Wisconsin, Kommers majored in philosophy and English literature at Catholic University of America, served for two years in the U.S. Marine Corps, then earned master’s and doctoral degrees at the University of Wisconsin.

At Notre Dame, he served as editor of The Review of Politics from 1981 to 1992 and was director of the Law School’s Center for Civil and International Human Rights from 1976 to 1981.

“Don’s career at Notre Dame spanned my own time here as a student, as a member of the faculty and as dean,” said Patricia O’Hara, professor of law and former Matson Dean of the Law School. “First established as the Center for Civil Rights in 1973 under the leadership of Father Hesburgh, today’s Klau Center for Civil and Human Rights in the Keough School of Global Affairs broadened its direction internationally during Don’s tenure as director.

“While his formal appointment was in political science, he always regarded the Law School as his second home. We were certainly happy to have him because we basked in the light of his iconic scholarship on German and American constitutional law. A true interdisciplinary scholar, Don will be missed by his colleagues across many different departments at the University.”

In lieu of flowers, memorial contributions may be made to the University of Notre Dame Department of Development, 1100 Grace Hall, Notre Dame, IN, 46556, or online at giving.nd.edu.

Condolences may be sent to Nancy Kommers, P.O. Box 303, Notre Dame, IN, 46556, or made online via Kaniewski Funeral Homes.

Originally published by Josh Weinhold at news.nd.edu on January 16, 2019.