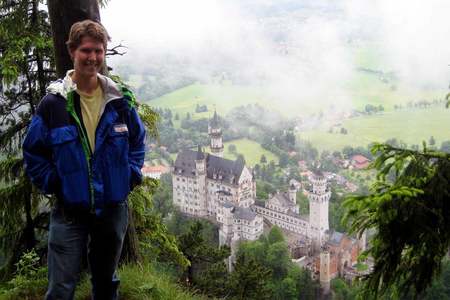 Mark Kettler, ’12, is writing an honors thesis in History to explore how German organizations tried to enlist Catholic support for the military on the eve of the First World War. Central to his project is a close exploration of original source materials in Germany. Kettler is interested for example in militaristic organizations like the Wehrverein, a group dedicated to pre-war military reforms. The major archives on this group are located in Koblenz, and Kettler is unusually well-prepared to explore them. Beyond his coursework at Notre Dame, he studied German in Munich for a month and in Berlin during the past two summers. During the 2010-11 academic year, he has been in Notre Dame’s study abroad program at the Freie Universität in Berlin and working on his thesis under the direction of John Deak (History). To prepare even more carefully for his thesis research, Kettler has also studied Sütterlin, a form of cursive used throughout Germany prior to 1941.

Diving into German archives, Kettler proposes to build a more comprehensive understanding of how religious communities in Germany were shaped to fit a nationalist and militant project.

Because what he wanted to do in Germany was so precisely and productively tied to his research question, his preparation for archival work so thoroughly appropriate, and his proposal so strong a model of clear writing, the Nanovic Institute’s faculty grant committee gave Kettler’s proposal their unqualified praise and, thanks to the generosity of R. Stephen and Ruth Barrett, the Barrett Prize for best undergraduate proposal.

I am currently attempting to analyze the relationships between German national militarism and the Catholic minority within the Second Reich leading up to the First World War. The two weeks of research in Munich this summer that I undertook as a result of the Institute’s support were invaluable in the information and development I have obtained for my thesis. It was only through this experience that I was able to gain proficiency in reading real examples of German handwriting which, until then, I had studied only theoretically. Beyond this, the support of the Institute was crucial in giving me the time in Germany’s archives necessary to build experience in historical research. These were invaluable opportunities for academic development that I could not have gained in the classroom.”