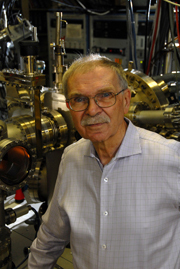 Jacek Furdyna, who holds the Marquez Chair of Information Theory and Computer Technology in the Department of Physics, has been invited to join the International Advisory Board of the Ukrainian Journal of Physics. He is a faculty fellow at the Nanovic Institute for European Studies at the University of Notre Dame.

Furdyna, a Fellow of both the American Physical Society and the United Kingdom’s Institute of Physics, has co-authored over 700 publications and given talks across the United States as well as in Poland, Korea, Germany, Austria, Canada, Belgium, Japan, France, Georgia and Russia. Furdyna, a native of Poland who earned his bachelor’s degree at Loyola University in Chicago and his Ph.D. at Northwestern University, came to Notre Dame in 1987. In 2002 Furdyna was awarded a Doctorate Honoris Causa by Warsaw University.