The European Union is aiming to generate a fifth of all its energy from renewable sources by 2020 to lessen reliance on imported oil and gas and meet climate change goals to reduce greenhouse gas emissions.

Wind power will likely play the major role and could generate up to 16 percent of all EU energy — or a third of all electricity — by 2020, the European Wind Energy Association says. Read the full article at Business Week.

George Mandarakas, now a senior in the College of Engineering, received Nanovic undergraduate research and travel grants in 2007 and 2008 to travel to Greece to study this issue that is now making headlines. His research focused on wind farms in the Islands of Andros and Tinos and their impact on the island’s dependency on of non-renewable resources. 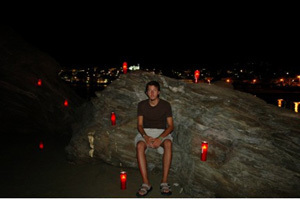 This past summer (2008) I traveled back to Greece to continue my research on wind energy. Last summer my research was centered on the Island of Andros where I analyzed the impact that a wind farm had on the island’s nonrenewable resource consumption. My previous analysis determined that Andros’ wind farm contributed moderately to a reduction in the island’s nonrenewable resource consumption over the past four years. This summer I hoped to substantiate my results by conducting an energy analysis of Tinos Island.

Andros and Tinos are neighboring islands and both have similar populations, only 8800 and 7900 residents respectively. Unlike Andros, Tinos does not have a wind farm and as a result, Tinos served as an experimental control to which I could leverage my previous findings.

While on Tinos, I visited the main power facility located in Tinos Town. I spent my first week meeting with plant managers in an attempt to collect as much energy data as possible. I found this to be a real challenge not because of the large variety of data, but because Tinos imports a large portion of its energy from mainland Greece. Therefore, at times it was difficult to distinguish between what energy had been supplied to the island and what had been generated on the island. The remainder of my time on Tinos was spent traveling around the island. I hoped to gain an idea as to the percentage of residents who owned solar panels. This was important knowledge because solar panels can themselves greatly influence the power supply on the island. Therefore, it was important for me to isolate the energy contribution of the solar panels so that I could properly evaluate only the nonrenewable resource consumption.