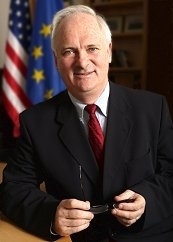 The European Union and the United States have both seen a marked deterioration in their economic health in recent months. But amid all the doom and gloom, a significant milestone was reached, and possibly overlooked on January 1, 2009, when the EU celebrated the 10th anniversary of Economic and Monetary Union (EMU) and the introduction of the euro. Without EMU, the fallout from the current global crisis could have been far worse. In addition to the single monetary policy for the 16 member countries of the euro area, EMU also consists of mechanisms to coordinate national fiscal policies – and these were used to good effect in the EU’s coordinated plan for national fiscal stimulus. This provides a measure of stability for businesses and for national economies, not just in the euro area but for all EU Member States and for other economies that depend heavily on their trade with the EU.

If the EU and the US hope for a rapid recovery, keeping our markets open and working closely with our main trading partners is critical. In our highly interdependent global economy, protectionism by one country could trigger a worldwide spiral of protectionism that can only hurt us further. The EU and the US must jointly take the lead in keeping the commitments made by the G20 in November 2008 not to introduce protectionist measures.

European coordination under EMU helps facilitate our cooperation with the US and other members of the G20 to ensure an effective global response. The EU welcomes the actions taken by the United States to help stimulate economic activity and repair its ailing financial system. And at national and EU level, we are also taking monetary, fiscal, and financial measures to head off this crisis.