During a four-week summer intensive German course in Cologne, Paul Wheatley, a doctoral student in Christianity and Judaism in Antiquity, developed crucial proficiency in German language and cultural understanding. The trip also provided opportunities for essential future research in German as well as several relationships with German scholars, professors, and museum curators that will aide future research and collaboration.

As a scholar of the world of early Christianity and the material witnesses to the development of the Gospel tradition, working in collaboration with a broad base of researchers and people with access to manuscript collections is crucial. In the field of biblical studies, many researchers publish in German and host substantial research projects at German universities. This summer, my goal was to begin my study of German language and culture in an environment where I could begin to develop not only reading proficiency in German, but also cultural and speaking proficiency to aid participation in a German-speaking collaborative research environment during my dissertation and post-doctoral research. For this reason, I undertook a month-long intensive German language course at the Carl Duisberg center in Cologne, Germany. 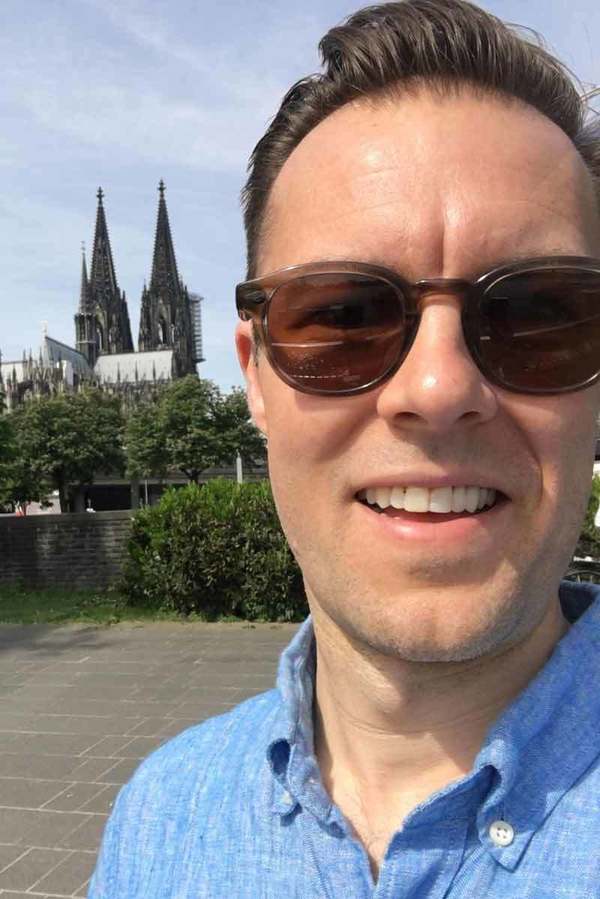 During my month in Cologne, I spent my weekdays from 9 a.m.–2 p.m. in the Carl Duisberg Center’s intensive German course, which was primarily focused on moving students to conversational proficiency in German. The pace of the course allowed me to have a general grasp of the basic grammar and important vocabulary for daily conversation by the end of the course. I supplemented my classroom learning with daily interactions in the market one block away from my home in Cologne and in a local café where I was able to hold brief conversations and overhear daily interactions of everyday Germans.

In addition to this hands-on learning, I was also able to meet several scholars during my time in Germany, developing relationships that helped me learn more about how doctoral and post-doctoral researchers work in the German research environment. In Cologne, I met with Franz Fisher, the managing director of the Cologne Center for e-Humanities, and I met with Dela von Böselager, the archaeological researcher responsible for the historic textile exhibition and collection in the Cologne Cathedral treasury. Both scholars helped me to understand how research in the German environment might work, and they provided helpful examples of how I could structure my research to aid greater international collaboration.

During the mid-point of my month in Germany, I had the opportunity to attend a conference hosted by the Center for the Study of Manuscript Cultures at the University of Hamburg. At this conference, I met two senior scholars heading research projects closely related to my research interests in the material shaping of the Gospels in various manuscript traditions. While most of the presenters delivered their papers in English, I was pleasantly surprised to discover that my language learning had progressed to the extent that I was able to follow the argument of the one paper presented in German. I also connected with a German doctoral student finishing a dissertation related to the liturgical reception of the Gospels in Medieval manuscripts that covers similar ground to the work I plan to do in earlier manuscripts. Our exchange of research methodologies and early findings confirmed some hypotheses we independently held.

I entered this summer expecting that the German research environment would resemble what was familiar to me from my American and Canadian study contexts. However, my interactions with different professors, researchers, and doctoral students helped me to see how differences in funding, student-professor relationships, and administrative structures make the German institutions with which I would be interested in collaborating, very different from the U.S.

Most specifically, I noticed that the way in which E.U. and state funding is administered is often more determinative than internal university funds for developing research projects. I also learned how the German academic hierarchy influences how and with whom I would best communicate in order to develop a plan for future collaborative research through a Fulbright or Humboldt grant. Much of this hierarchy is encoded in subtle distinctions between titles for professors and researchers that dictate how one must address these scholars. My language learning helped clarify this, and my cultural interactions further elucidated these distinctions.

This experience laid the groundwork for my understanding of the German language for future research here at Notre Dame and beyond, but the cultural learning and networking opportunities offered a unique vision for ways that my research could develop in collaboration with German researchers and projects. As I continue studying German for reading, my understanding of the language for speaking eases my ability to grasp the feel of the language when reading, even if the precise vocabulary specific to my field was not a part of my language course. This has already deepened my understanding of crucial texts for my secondary research. Moreover, after meeting researchers in Germany, I see new ways to incorporate German research opportunities into my ongoing growth as a scholar and researcher. Furthermore, as a scholar of the material culture of early Christianity, being in a city such as Cologne, where the history of the city as a first-century CE Roman colony, important location for Christian cultural development in the Middle Ages, and an ongoing center for the study of the humanities has impressed upon me the longer duration of history’s broad sweep from which my scholarship can draw, and the ongoing importance of understanding this long sweep for presenting my research to help people today understand their place within history and their movement towards the future. I now feel more confident to engage in further research and scholarship in German-speaking contexts, and it has strengthened my ability to interact with German scholarship for my own research.