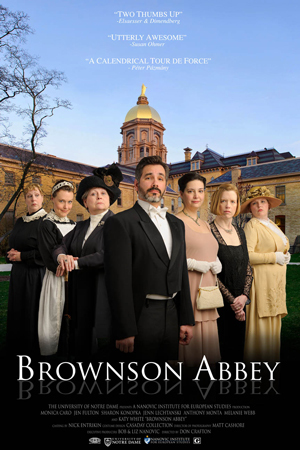 The Nanovic Institute for European Studies takes pride in offering the finest hospitality to a variety of distinguished guests. Have a film director traveling with an infant? No problem, they’ll include details down to the car seat in the itinerary. Need a gift for royals or actresses who seemingly have everything? Staff members have scoured the university to come up with everything from an archival photograph of a subject portrayed by the actress to unique renderings by architecture students. So, when the Institute’s interim director was ending his term, the team had a high standard for creating a memorable gift. With the help and talents of senior university photographer Matt Cashore, the Nanovic staff again delivered.

When Don Crafton, the Joseph and Elizabeth Robbie Professor of Film, Television, and Theatre, assumed his role as interim director he carried movie posters with him to hang in Brownson Hall and, with his expertise in film, ensured that the Nanovic calendar included a number of film-related visitors and initiatives. He also suggested that the Institute run its first television ads by sponsoring the local PBS screenings of Downton Abbey. With these facts in mind, events coordinator Melanie Webb thought of creating a unique Brownson Abbey poster, mimicking the design for the Emmy-nominated British television series. Jenn Lechtanski, the Institute’s communications specialist with an eye for costume design, joined Melanie and business associate Sharon Konopka to scavenge a local costume collection for period garb for the entire staff. After a lively and efficient photo shoot, all the pieces were in place for some fancy Photoshopping, which Matt Cashore completed with aplomb.

The gift was unveiled for Don at a recent gathering. “My chin is still sore from when my mouth dropped. The creative teamwork and professionalism of the Nanovic Institute are unsurpassed.” Jim McAdams has returned to the helm of the Nanovic Institute, and while the staff members look forward to serving under his leadership for the years to come, they are on the lookout for the next perfect gift . . . .