Prof. Dmytro Sherengovsky from the Ukrainian Catholic University in Lviv, Ukraine, is a Visiting Scholar at the Nanovic Institute for spring 2016.

Welcome. Please tell us a little about your background.

Aside from my studies and NGO work, I also had a number of internships in diplomatic and consular departments of Ukraine in Poland and Slovakia and MFA of Ukraine. It was exactly that point that I understood I actually loved academia and wanted to develop the field rather than to stay in the profession. Thus I decided to enter PhD program in International Politics at my alma mater, which I finished in 2012. My research was dedicated to the phenomenon of “conflictogenity” (conflict causing effect) in modern international systems and the social culture of conflict behavior.

In 2014 I earned my PhD from Yuriy Fedkovych Chernivtsi National University in Ukraine. That year I started working in the Department of International Academic Relations at the Ukrainian Catholic University (UCU). Besides my mainly administrative work, I have continued my research activities in the field of conflict studies and started lecturing for international exchange students at UCU. Currently I’m holding the position of Director of the International Academic Relations Department at UCU, responsible for implementing the internationalization strategy of university. I’m also engaged into project work and academic activities in the Rule of Law Center (RLC) at UCU.

What is the current political environment like in Ukraine? 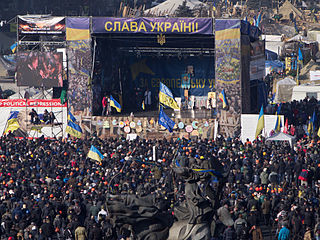 These factors are serious obstacles in the way of Ukraine’s transformation into a stable democracy, causing the effect of moving both backwards and forewards, or the effect of “political turbulence,” as J. Rosenau would name it. The trickiest thing lies in the fact that despite twenty-five years of Ukrainian sovereignty, Ukrainian political elites proved to be unable to ensure a stable democratic transformation. So two social revolutions occurred: the Orange Revolution in 2004, and The Revolution of Dignity in 2014.

Unfortunately even now, despite the all progress, we can see the major opposition of the post-soviet political system developed over the course of  these years, providing unlawful dividends for the political establishment. We are still facing the control of oligarchs and major business structures over political processes and rigid resistance to transparent and legitimate mechanisms of public governance. Corruption in Ukraine has a systemic character and has penetrated the entire society, both at the level of officials and at the grassroots level. Many Ukrainians are confronting corruption in everyday life, often taking it as a natural practice (27 points out of 100 points of corruption resistance of Ukrainian society, according to Transparency International Survey, 2015). That fact reinforces the paternalistic attitude of Ukrainian citizens toward public life and the lack of professional public activism — despite, during Revolution of Dignity, the declared will of the majority of Ukrainians for a profound democratic transformation in the country. Moreover, in such political environment, we can see deep tensions between different political actors, represented in current government, who were considered to be ‘new generation’ of responsible politicians after the events of the Maidan.

Nevertheless, I stay optimistic about the future of Ukraine in the long run. The number of social initiatives is rapidly increasing; volunteer movements still persist; different social organizations are more concentrated on responsible citizenship; new educational platforms for education in good governance and public administration have been established to form a new generation of professionals; anti-corruption activities are starting on the grassroots level; and new political parties of ‘middle class’ are developing. All this makes an important contribution to the development of functional social and political institutions that we were lacking for a long period.

This is all what an airplane in turbulence actually needs – professional management and some time to leave the turbulent area. I do not see any major inside threats that could stop the democratic transformation of Ukraine in the long run. However, I do not see that above-mentioned problems will be easily solved in the short run.

What are the most important challenges in the short run?

Outside threats seem to be more important nowadays. The main political danger of Russian occupation of Crimea and military aggression on the Eastern part of Donetsk and Luhansk regions to Ukraine lies in the attempt to bring Ukraine to a “failed state” status that would secure Putin’s regime from any possible transformations. If Ukraine does not renew its control over the occupied territories in the East and Crimea, this will not only be a challenge to the Post-Cold War system of international relations and modern international law, but a proof of Putin’s main message that corrupt, anti-social, and anti-human political regimes are not subject to change. Thus, the current conflict in Ukraine is political and military combat for a right to be a country both in the territorial and functional sense. Until Ukraine renews control over all of its territories, it can’t ensure the basic level of security for its citizens not only in the East, but in the other regions.

To what extent can allies play a role?

Unfortunately, Ukraine is a hostage in the situation. It can’t resist Russian power solely by itself, and it can’t construct a European security architecture with a special place for itself as part of its own strategy of Russian deterrence. There is no evidence that the EU is planning to make a comeback to the Cold War period and re-construct such a strategy. The hard problem is that a clear idea of Ukrainian place in European security architecture is unknown both in Ukraine and in the EU. Therefore, answers must  be found by both parties. However, the situation now is characterized by present Ukrainian instability, by the everyday Russian expenditure of large amounts of money on the Russian military, and by the absence of understanding of how Ukraine should, or could, be brought inside the EU community. Ukrainian political elites should prove by such a strategy that we are a stable partner, and ready to implement such a strategy.

Are you hopeful then for a peaceful resolution?

As I have mentioned, I’m still optimistic about Ukrainian future in the long run. There are no reliable reasons to consider possibility of a violent resolution to the conflict in the eastern part of Donetsk and Luhansk regions. The Ukrainian army is not strong enough to confront both the Russian forces and pro-Russian separatists that are present in the eastern Ukraine and the addition of possible forces that could be placed there by Russia in case of a renewal of escalation.

Therefore, Ukraine will be supporting peaceful negotiations in Minsk or other possible formats aiming to restore control over Ukrainian-Russian border and being ready to organize transparent elections in case of such restoration.

Pro-Russian regimes in the East of Ukraine (so called Donetsk National Republic – DNR and Luhansk National Republic - LNR) are also not interested in further large-scale military actions, as, without Russian support, they couldn’t resist the more powerful Ukrainian army. However, separatists will likely use the tactics of local ‘partisan war’, trying to secure their borders and in that way legitimize their power. Military escalation is not useful for Russia, as it will  meet the strengthening of sanctions and possible military support of West Ukrainian forces.

Therefore, there is no other alternative to a peaceful resolution of this conflict, despite the fact that a “conflict-resolution identity” is not shared between the conflicting parts yet. The major Ukrainian demand—to restore Ukrainian control over Ukrainian-Russian border—is not a Russian priority. This is a weak point of Minsk process that breaks any peace-resolution initiative now. Despite border control being a key priority for Ukraine, I would not advise making it major point of negotiation.

Peace, even if it is unstable peace, is important for all parties. The major question here is how to construct this peace, and this is my main research interest here in the Notre Dame. Minsk negotiations are the only achievable format that we have now. However, we should clearly understand that a Minsk agreement would not be a legally binding document, but a political document, outlining peace resolution negotiations. That means that all articles are dependent on compromises in the political situation. I’m not advocating violations of Minsk by any of the parties, but claiming rather that this document serves only as a part of the negotiation process. Final clauses could be different from what can we see now. And here is a task for Ukraine to be active with reforms, to strengthen its army, to give a strong fight in the trade and energy area with Russia, and to enrich cultural diplomacy and its soft power in the Eastern part. All these steps are not subject to any compromises or negotiations, but can have the benefit of making the Ukrainian position more stable and stronger. The outcome would come closer to a peaceful resolution.

What will your stay at Notre Dame help you to do as a scholar?

First of all, I’ll mention access to library resources that I’m lacking in Ukraine as access to the world’s newest books and articles is rather expensive both for Ukrainian universities and Ukrainian scholars.

I’m also planning to use the opportunity and meet faculty members and fellows of various institutes at University of Notre Dame and to speak about their opinion of the Ukrainian conflict and possible resolution models. It will help to ensure high quality of research and to look on the current situation from the other perspectives. These activities would parallel current plans at the University of Notre Dame to hold workshops and seminars on the above mentioned issues, in which I’m planning to participate.

Secondly, I’ll have a time for my research, which I’m lacking as a part of an administrative staff at home. I hope that my staying here will give me an opportunity to work with sources in order to publish several articles and to start a book. All gathered materials will definitely benefit the development of Peace studies and American Studies in Ukraine.

I’m also enthusiastic about establishing of academic ties between faculty members of the University of Notre Dame and the Ukrainian Catholic University, which help us to enrich international cooperation experience of both sides. Getting to know each other better is the most important opportunity that Notre Dame and in particular the Nanovic Institute provides to scholars, fulfilling the mission of Catholic education.

Is Notre Dame what you expected? Has anything here surprised you?

I’m excited with the facilities Notre Dame provides for studying, teaching, researching and understanding your place in our world. You are providing  wonderful opportunities for both intellectual and spiritual growth. But I’m most deeply impressed by your atmosphere of care and support, the feeling of being part of one big family with similar Catholic values despite being from different cultural traditions that is experienced from the first day you come here. This is a very inspiring feeling that motivates you to act and to serve professionally for the glory of human dignity and Christian values.