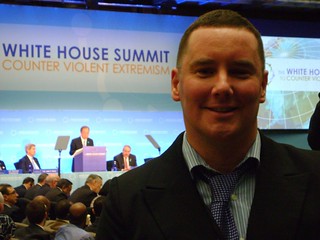 In the fall of 2013, we awarded Peter a Graduate Professional Development Grant to participate as the keynote speaker at the Curtin University's Countering Violent Extremism Conference in Australia. In his address, Peter answered questions such as the following:

"How can lessons learned in the aftermath of terror attacks such as the European contexts of Northern Ireland, London, Madrid, and Munich be applied worldwide?"

"How do global partnership approaches and dynamic collaboration from the international sphere feed back into and benefit the European Union's counter-terrorism tactics?" 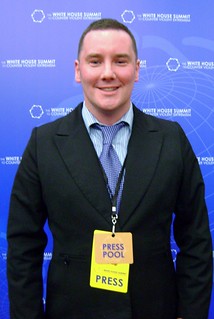 Greetings from Washington!  As a former Nanovic grantee, I wanted to send a note from inside the White House, where I am attending a Summit as part of my peacemaking organisation's work here, in the "post-ND life."

The reason I write is to record both my appreciation and the impact of the Nanovic grant, even way after graduation.  My ongoing success in my field was in part due to the generosity of the Institute's funding and faith during my time at Notre Dame.  This enabled me to be a Keynote Speaker at several conferences, including as far away as Australia, and creating a path which has ultimately led to involvement with the White House conflict resolution initiatives.

In this era of global security uncertainty, there is no greater need for research and collaboration to protect our world against the expanding threat of terrorism.

Due to Nanovic's inspiration and initial facilitating of opportunity, I am due to be published in a peer-reviewed academic counter-terrorism journal, and have merited a place on a PhD course in Australia in the same field.  I've been appointed to the Board of the New York 9/11 Survivors Association NGO and most recently have been preparing for attendance at this week's White House Summit.

I'm here participating in the White House Summit on Countering Violent Extremism as part of the Accredited White House Press Pool (as per attached picture).  Sitting just feet away from President Obama, UN Secretary-Gen General Ban Ki Moon and a host of world leaders is quite exciting.  The challenging part is now underway - writing the analysis Op-Eds for Irish and Australian media (!).

As a European, I came to Notre Dame facilitated by, and on behalf of victims of Irish terrorism from my war-zone homeland of Northern Ireland.  Scarred by the experience of the literal "bad Fighting Irish," I was enriched by the academia of the "good Fighting Irish" to support peacemaking back in Notre Dame's spiritual European home of Ireland.  My Nanovic grant also afforded the initial stages of fostering critical global security and research partnerships.  I have reflected upon this here at the White House, and felt compelled to dispatch this note to you.  I continue to work to enable the Notre Dame advertised-on-campus creed to "Heal, Unify and Enlighten" to become tangible in the world.

I wanted you to know that your generosity at the Nanovic Institute is already inspiring me to make meaningful contributions to this ambition, and will continue to do so.  Both at the White House and beyond.

As to that, Peter Kelly, the Nanovic Institute offers its profound prayers and well-wishes. Go forth and make the world a better, more peaceful place.