Here at the Nanovic Institute, we award a lot of undergraduate grants, and we trust that our efforts bear fruit in the personal, academic, and professional lives of the students. It's always nice, though, to receive the sort of confirmation that we received the other day from John Hennessey ('09, Major in History and French & Francophone Studies). John received The R. Stephen and Ruth Barrett Family Grant for Best Undergraduate Travel & Research Proposal for his research in Aix-en-Province in the summer of 2008.  With it, he conducted research for his senior thesis on French Indochina during the Second World War. 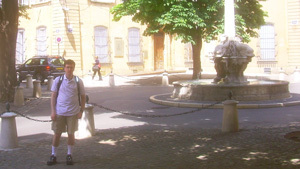 Upon his return, he told us that "the Nanovic undergraduate research grant that I received had both short and long-term benefits for me: it helped me tremendously with the research for my senior thesis and gave me very important experience for a possible future academic career." That "possible future academic career" is now a reality. Hennessey is currently a Ph.D. student in history at Linnaeus University in Sweden studying the colonial intellectual exchange between "the West"--especially France--and Japan. He has also, it turns out, been revising his senior thesis written here at the University of Notre Dame and has recently had it published! It is now a chapter in an anthology titled Imperial Expectations and Realities: El Dorados, utopias and dystopias, published by Manchester University Press. When Hennessey wrote to us with his news, he had this to say:

This fieldwork opportunity [made possible by the Nanovic grant], together with the experience of writing an undergraduate thesis, has proved extremely valuable for my career. I would like to express my deep gratitude to the Nanovic Institute for making this possible, and thought that you would be happy to hear that your grant eventually led to a publication.

Yes, this does make us happy! Congratulations, John!

For more information on Imperial Expectations and Realities, go to the Manchester University Press website or to Amazon.