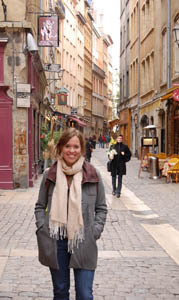 I took a minor in European studies and also received a Nanovic grant to study in Lyon, France during my senior year. I am now just completing my Master’s dissertation in Modern French Studies at the University of Kent in Canterbury, England. I split my year between the campus in Canterbury and Kent’s new campus in Paris, and took courses mostly in nineteenth-century French literature but also in french film, expat literature and comparative literature.

Studying for a Master’s abroad was a fabulous experience, and I would certainly encourage students to look into it (and particularly into English universities; taught MA’s typically last one year and are offered in many really interesting subjects). My classmates came from all over the world, I made some really great friendships, and though I’m back in the States at the moment, I do plan on eventually returning to England for work.

I would definitely encourage any student who has even the slightest interest in living/working/studying in Europe to do a minor in European studies. It really set the groundwork for everything I’m doing now: I appreciated being able to tailor the minor to reflect my interests, and see it as such a well-rounded and interdisciplinary program of study in general – my Master’s program is really interdisciplinary as well, and I love being able to combine so many varying interests. The grant gave me a great opportunity to work on my research skills (as well as travel!). Truly, I can’t say enough good things about the Nanovic in general.